Shel's Books. “My beard grows to my toes, I never wear no clothes, I wraps my hair Around my bare, And down the road I goes.” – “My Beard” Where the Sidewalk Ends “Needles and pins, Needles and pins, Sew me a sail To catch me the wind.” – from “Needles and Pins” Falling Up “Millie McDeevit screamed a scream So loud it made her eyebrows steam.” – from “Screamin’ Millie” Falling Up “I will not play at tug o’ war. 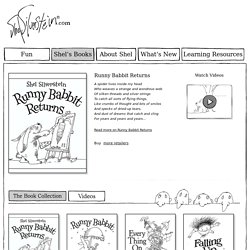 The Reading Room It's Spike's first trip to the big city and there are so many new things to do, see, and smell-he doesn't know where to begin. 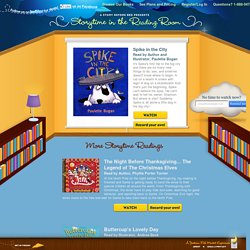 A cat on a leash! A snake with legs! A dog on a skateboard! And that's just the beginning. At the North Pole on the night before Thanksgiving, toy making is finished and Santa is getting ready to send the elves to their special children all around the world. The Big List of Children's Book Writers Doing Virtual Author Activities. With kids at home and parents looking for educational activities, many of our favorite authors are offering online read-alouds and activities on social media. 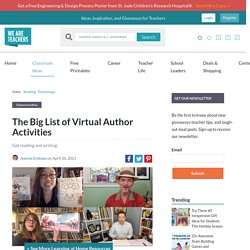 Marc Brown is the creator of Arthur, the most popular aardvark in the world. 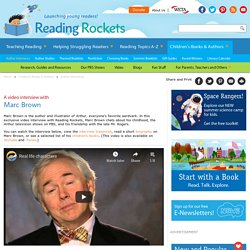 What started out as a bedtime story has turned into a global phenomenon. From the Americas to China, Arthur the loveable aardvark turns up in books, schools, backpacks, and even bowls of macaroni-and-cheese. Arthur's Emmy Award-winning PBS television series is broadcast in over 60 countries. And in the United States alone, nearly 60 million Arthur books have been sold. A video interview with Henry Winkler Lin Oliver. Biography of Henry Winkler Henry Winkler is an actor, producer, and director best known for his portrayal of Fonzie on the hit 1970s sitcom Happy Days. 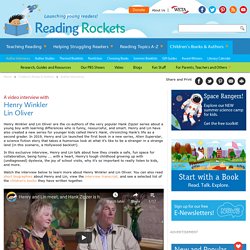 He later appeared in movies like Scream (1996) and on numerous TV programs, including The Practice and Arrested Development. In 2018, Winkler began starring alongside Bill Hader in the comedy/drama series Barry. Winkler's role as acting teacher Gene Cousineau won him his first Emmy in 2018 for best supporting actor. Henry Franklin Winkler was born on October 30, 1945, in Manhattan, New York.

Winkler grew up with "a high level of low self-esteem. " In addition to his movie and film credits, Winkler is a best-selling author of children's books. Winkler has been married since 1978 to Stacey Winkler and is a father to three grown children. Winkler hosted the Reading Rockets PBS show, Reading and the Brain, which explores how brain scientists across the country are working to help struggling readers. 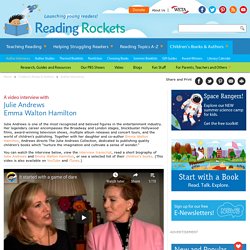 Julie Andrews is one of the most recognized and beloved figures in the entertainment industry. Her legendary career encompasses the Broadway and London stages, blockbuster Hollywood films, award-winning television shows, multiple album releases and concert tours and the world of children's publishing. A child star of the British vaudeville circuit, Ms. Andrews came to America at the age of 19 to star in The Boyfriend on Broadway. She subsequently received critical acclaim for her legendary stage performances in My Fair Lady, Camelot, and Victor/Victoria. Andrews' dedication to children has been steadfast throughout her career. Andrews' considerable charitable work has been consistent throughout her career, and in 2000 the title of Dame Julie Andrews was bestowed upon her by Queen Elizabeth II for lifetime achievements in the arts and humanities.

A video interview with Norman Bridwell. Biography When Norman Bridwell first visited children's publishing houses in 1962, one drawing in his portfolio was of a little girl and a big red dog. 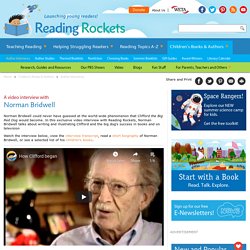 Little did Bridwell know, this idea would evolve into a global phenomenon, helping him to sell over 44 million books. Bridwell claims that "luck has a lot to do with it," but without his adorable illustrations, playful humor, and childlike imagination, Clifford would not have become one of the world's most beloved dogs. Children love to see what Clifford the Big Red Dog will do next, whether it's putting out a fire, joining the circus, or just doing tricks. A video interview with Andrea Beaty. Beaty was raised in a small town in southern Illinois. 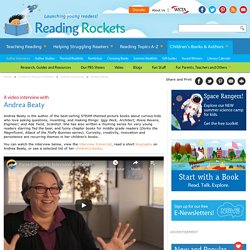 She was one of six kids and spent her summer days outdoors, looking for adventures in the fields and forests near her home. She was a big reader as a kid and especially loved the Nancy Drew and Trixie Beldon mysteries. She later moved on to Agatha Christie books and then the classics. A video interview with Tomie dePaola. Tomie dePaola (da POW la) is one of today's most recognized names in the world of children's literature. 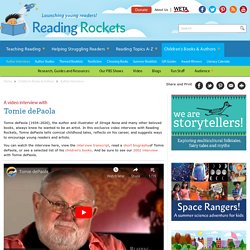 His charming characters and distinctive artistic style make his picture books appealing to both children and adults. He has published folktales, nursery rhymes, board books, religious books, chapter books, and more.