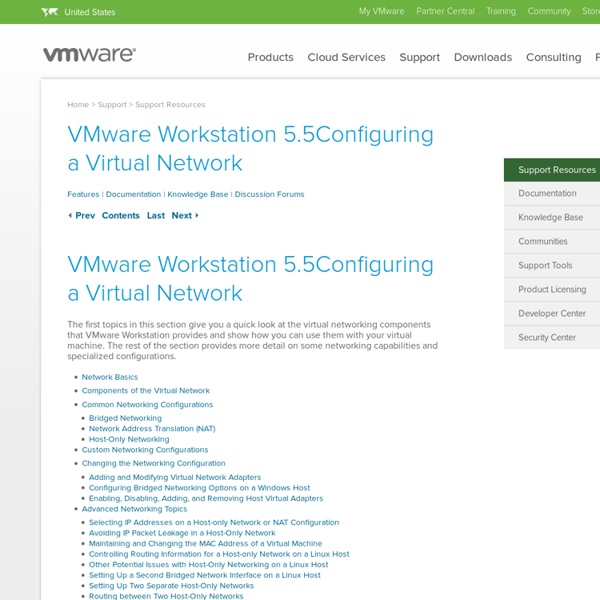 Features | Documentation | Knowledge Base | Discussion Forums Prev Contents Last Next The first topics in this section give you a quick look at the virtual networking components that VMware Workstation provides and show how you can use them with your virtual machine. The rest of the section provides more detail on some networking capabilities and specialized configurations.

Setup Remote Desktop Services in Windows Server 2012 R2 - VirtuallyBoring Microsoft Remote Desktop Services [RDS] allows users to access centralized applications and workstations in the data center remotely. Microsoft RDS is the new expanded and renamed Microsoft Terminal Services. In this post I will document the implementation of RDS in my home lab using an ‘all-in-one’ configuration. vBoring Blog Series: Server Roles in RDS: Network Basics Features | Documentation | Knowledge Base | Discussion Forums Prev Contents Last Next VMware Workstation provides several ways you can configure a virtual machine for virtual networking. Virtual Networking 101: Understanding VMware Networking On a basic, structural level, virtual networks in VMware aren't that different from physical networks; vSphere is designed to mimic the functions of a physical network, so a lot of the network hardware you'll find in the real world, you'll find virtualized in VMware. If you understand how physical networks operate, then understanding virtual networking shouldn't be too difficult. Before jumping into an explanation of how VMware handles virtual networking, I'll first provide a quick refresher of the basic equipment that makes up a physical network. If you already have a firm understanding of how networking works, then you can skip the following paragraph. To connect to a network, a computer must be network-capable, meaning that it must have a working network interface controller (NIC), also known as a network card or network adapter, installed.

Using VMware: Understanding the Virtual Switch Introduction In this article we will explore the VMware ‘Virtual Switch’. The Virtual Switch is nothing more than a logical switching fabric built into your VMware infrastructure (ESX) so that you can network your Virtual Machines (VMs) however you need them. In the following sections we will cover the basics of the Virtual Switch, terminology used, its use, configuration and management. To view the Virtual Switch, you will need to be using VMware, the VIC and have access to VirtualCenter.

Free Resources from – Yung Chou on Hybrid Cloud Microsoft Patterns and Practices and other free eBooks Private Cloud Whitepapers and Tools Windows Azure Pricing Calculator Posters More hybrid cloud resources at You want to download this one! Bridged Networking Features | Documentation | Knowledge Base | Discussion Forums Prev Contents Last Next Bridged networking connects a virtual machine to a network using the host computer's Ethernet adapter. Bridged networking is set up automatically if you select Use bridged networking in the New Virtual Machine Wizard or if you select the Typical setup path. This selection is available on a Linux host only if you enable the bridged networking option when you install VMware Workstation.

How to Create a Virtual Networks by Using VMware Workstation Edit Article Questions and Answers VMware Workstation is very useful software, using in developing and testing a system which run in a real network. I will give you an example, showing how to create sophisticated virtual networks in VMware Workstation ,which can be used to test database server system. In this example, a database server connects through a firewall to an external network. An Administrator’s computer connects to the database server through a second firewall. Managing virtual networks with VMware's Workstation and the Virtual Network Editor By submitting your email address, you agree to receive emails regarding relevant topic offers from TechTarget and its partners. You can withdraw your consent at any time. Contact TechTarget at 275 Grove Street, Newton, MA. You also agree that your personal information may be transferred and processed in the United States, and that you have read and agree to the Terms of Use and the Privacy Policy. Many virtualization administrators find in VMware Workstation's networking configuration and its Virtual Network Editor intimidating and difficult to master.

Networking for VMware Administrators: Book Excerpt A good understanding of networking is becoming crucial for virtualization administrators and here to fill this gap is Chris Wahl and Steve Pantol's Networking for VMware Administrators. The book covers a wide range of virtual networking environments, addressing virtual switching and networking, and the differences between physical and virtual networks. With a focus on VMware vSphere, the text offers plenty of real-world examples which focus on building a good networking foundation. The following excerpt focuses on how virtual switching differs from physical switching. TUTORIAL: Hyper-v in Virtualbox Installing a hyper-V in virtualbox is not advisable. As you install a virtual machine in a virtual machine, but for testing things out it’s an easy solution. I assume that you already have installed a virtual machine in VirtualBox. If you do not know what that is, please click here.

Understanding NAT Features | Documentation | Knowledge Base | Discussion Forums Prev Contents Last Next Network address translation — or NAT — provides a simple way for virtual machines to use most client applications over almost any type of network connection available to the host. The only requirement is that the network connection must support TCP/IP.