Cosmos - The science of everything 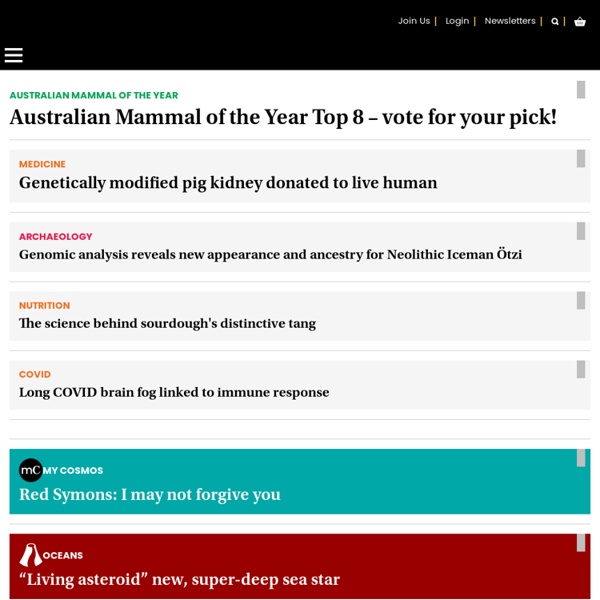 Could humans be Earth's second civilization? “How do you know we’re the only time there’s been a civilization on our own planet?” [said Goddard Institute for Space Studies director Gavin Schmidt]. [T]hat first conversation launched a new study we’ve recently published in the International Journal of Astrobiology. Vexatious viognier a difficult partner by Tim White What is it that vexes even the most voracious of vino lovers about viognier? Is it the variety's name, a variationist's dream: so may ways to mispronounce it and embarrass yourself.

NOVA Can Wind Turbines Make You Sick? Residents living in the shadows of wind turbines say the sound is making them sick. But so far the science isn't there. The 4 Most Important Things to Know as a Gamer Parent In a Game, the Objectionable Content Can Be Buried Deep So, I realized then that being vigilant about my kids' gaming was going to require me to do some actual, strenuous parenting beyond simply trying to banish games from their lives and washing their eyes out with soap. I needed to treat my games the same way I treat television. When my kids watch movies or TV shows, they do it in a room where I can easily supervise the content (it's one advantage of having a small place with one TV). And when inappropriate situations pop up, we talk about it.

Coursera UPDATE: we're doing a live, updated MOOC of this course at stanford-online July-2014 (not this Coursera version). See here: CS101 teaches the essential ideas of Computer Science for a zero-prior-experience audience. Computers can appear very complicated, but in reality, computers work within just a few, simple patterns. CS101 demystifies and brings those patterns to life, which is useful for anyone using computers today. In CS101, students play and experiment with short bits of "computer code" to bring to life to the power and limitations of computers.

MACH: The best and latest in Tech & Innovation Dominic Hogdson / Sentinel-2/ESA Environment Iceberg's break from Antarctic ice shelf is 'geologically imminent' Scientists are eyeing a huge crack in the ice that has grown more than 650 feet in the past month. U.S. news Mediterranean and Near Eastern Fieldwork at Penn The Mt. Lykaion Excavation and Survey Project is an international, multidisciplinary, scientific investigation at the sanctuary of Zeus on Mt. Lykaion, Arcadia. According to ancient authors, this sanctuary was famous in antiquity as the site of Pan-Arcadian and Pan-Hellenic athletic contests in honor of Zeus, and for an impressive open-air altar where human sacrifice reportedly took place. There were limited excavations at Mt.

Bipolar kids: Victims of the 'madness industry'? - health - 08 June 2011 Read full article Continue reading page |1|2|3 THERE'S a children's picture book in the US called Brandon and the Bipolar Bear. Brandon and his bear sometimes fly into unprovoked rages. Sometimes they're silly and overexcited. A nice doctor tells them they are ill, and gives them medicine that makes them feel much better.