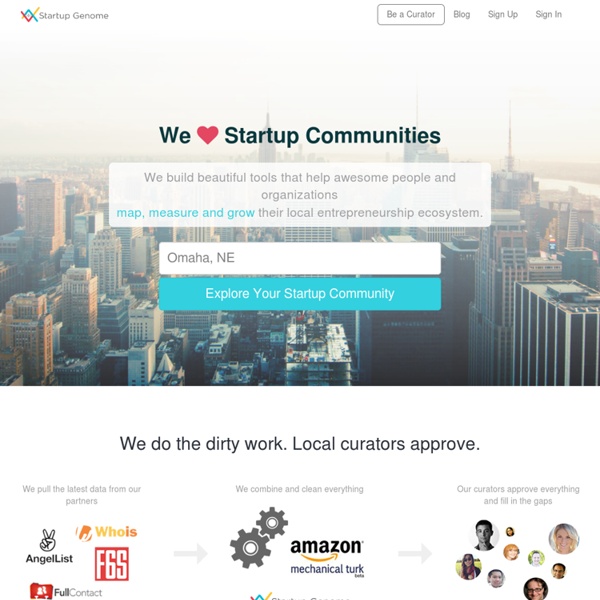 7 Tips for Creating Professional PowerPoint Templates A boring PowerPoint presentation has no merit. If the information isn’t presented well, your audience won’t take it in, so it’s crucial to put together something that people can really engage with. A balance of visual interest and well presented information is key to a successful PowerPoint. By taking the time to make a well-crafted Template, you can save yourself a lot of effort later on. Computers Beating Humans At Advanced Chess REUTERS/Kent Skibstad It's been 16 years since Deep Blue first beat Gary Kasparov at chess representing a major breakthrough in terms of the ability of computers to surpass to outperform humans at certain tasks. But now computers are beating humans in another crucial way according to a post by Tyler Cowen at his blog, Marginal Revolution. See, it used to be that a human aided by a computer could still beat a computer by itself. Increasingly that's no longer so.

The World’s Leading Cities for Startups and Innovation Silicon Valley and the San Francisco Bay Area have long been the world leaders in high-tech startups, giving rise to cutting-edge companies from Apple and Intel to Google, Facebook, and Twitter. But recent years have seen the rise of an increasingly potent group of cities around the world that are generating new startups in creative and unique ways. The 2015 edition of the Startup Genome Project from Compass (I wrote about the previous edition of the report back in 2012) provides a new ranking for the world’s leading startup cities. The report is based on data from 11,000 global startup companies, interviews with more than 200 entrepreneurs worldwide, and data from Crunchbase and other sources.

An Epic List of 100 Growth Hacks for Startups I recently launched my first SaaS product after four months of planning and design and another eight months of development. That gave me a LOT of time to start planning for growth and in particular, customer acquisition. I read everything I could from Sean Ellis, Liam Gooding, Ryan Holliday, Andrew Chen, and many others. In fact, I spent over 100 hours preparing one hundred different growth hacks to implement for my startup and I have prepared them for you to review below. These growth hacks can be used by startups and established businesses as well. Take what you can and apply them, but remember, they won’t work for every business or strategy. 10 Imperatives to Sustain Innovation "In the 17th century, Innovators didn't get accolades. They got their ears cut off." - Emma Green The competitive marketplace of the 21st century has brought with it a new connotation of the word "Innovation. We used to believe the Earth was the center of the solar system. Then it was the sun.

Berlin can now usurp London as startup capital of Europe Flag of Berlin CC BY 2.0 Conan via Flickr Berlin was already surging to the top of the global startup city list, but with London’s status now in limbo, Berlin stands to benefit Startups are not the only ones digesting the shock result this weekend. As political analysts predict Germany will take a larger role as a global leader as the most powerful country in the European Union, technology observers should expect the same for the country in the entrepreneurs’ realm.

TextMaster Raises Further €1M To Crowdsource Translation, Copywriting And Proofreading TextMaster, the crowdsourced platform for content translation, copywriting, and proofreading, has raised €1 million in a second round of funding. Money it has pegged for further International expansion, specifically Germany and Asia. The fresh capital comes from previous backer Alven Capital, eFounders and Cédric Siré (the founder of Webedia group). It brings total funding for the Brussels-headquartered company to €2.64m, having raised an earlier round back in late 2012. We’ve previously described TextMaster as akin to Amazon’s Mechanical Turk but for a very specific niche.

uk.businessinsider Dec. 18, 2014, 1:29 PM 3,635 Billionaire Peter Thiel, widely known as one of the founders of PayPal, is perhaps most strongly influenced by his experience as a professional chess player. In his book "Zero to One: Notes on Startups, or How To Build the Future," he outlines his theory on "last mover advantage." His advice goes against the popular theory that being the first one to enter the market is one of the most important tactics for building a successful company. London v. Berlin: Which startup ecosystem will lead Europe? Germany and the U.K. dominated the European exit scene in 2015, with the Israelis, French and Spanish close behind (London: CC-BY-SA 3.0 David Iliff via Wikimedia Commons; Berlin: CC BY 2.0 Robert Debowski via Wikimedia Commons) Data shows London has the clear lead, but movements on the ground and stats show that change might be coming Comparing two cities’ startup scenes is difficult.

Circle of Growth — Growing + Scaling Startups “Circle of Growth” is a concept launched by Leo Exter and Omar Mohout in Belgium. Concept behind the Circle of Growth The concept is pretty simple: bring together 5 technology Startups that are in the same stage of growth, i.e. product/market fit. Coach them as a group during 90 minutes (!) every month using a disciplined approach with focused, structured, short and intensive sprints. Not only the two coaches will focus 100% of their attention on the 5 teams; learning, sharing and coaching from the peers are as important if not more important as they all face similar issues.

Pepper delayed until summer; top Aldebaran execs leave Softbank announced a delay in sales of their Pepper robot from February until sometime during the summer. Aldebaran announced that CEO and Founder Bruno Maisonnier and Jean-Christophe Baillie have left Aldebaran as CEO and CSO respectively. According to an Aldebaran press release today, Bruno Maisonnier has sold his remaining shares of Aldebaran to Softbank (giving Softbank 95% of the shares) and will leave the company effective March 4th.