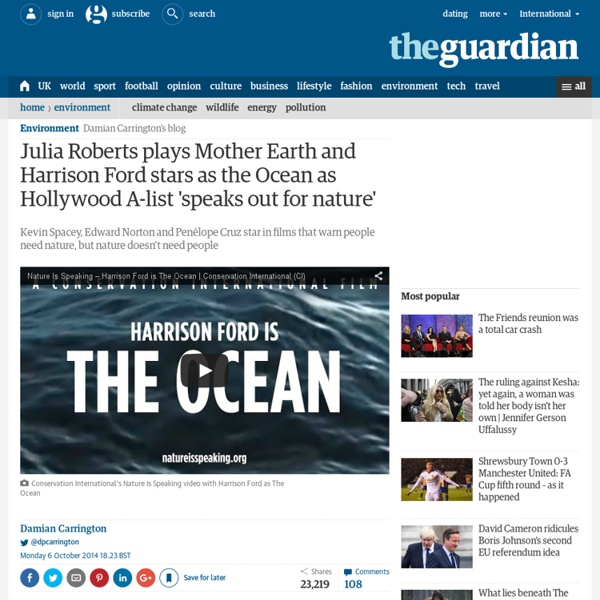 Ecosystem services. You’ve nodded off already, haven’t you? But wake up! Here are some Hollywood A-listers making a decent attempt to move beyond the obscure jargon and reveal the existential nature of what the Earth provides for humanity. The Nature is Speaking initiative is organised by Conservation International with the tag-line: “Nature doesn’t need people. People need nature.” “I have been here 22,500 times longer than you. “I have fed species greater than you and I have starved species greater than you,” Mother Earth warns. Harrison Ford as the Ocean is the most ominous. Other star turns released so far include Kevin Spacey as a cruelly sarcastic Rainforest: “Humans are so smart, such big brains, opposable thumbs. Edward Norton is the Soil, the thin layer providing the world’s food. The final film released so far is Penélope Cruz as Water. The films are certainly doom-laden, which some believe can leave people feeling impotent.

Why some people find learning a language harder than others Scientists at McGill University in Canada found that if left anterior operculum and the left superior temporal gyrus communicate more with each other at rest, then language learning is easier. "These findings have implications for predicting language learning success and failure," said study author Dr Xiaoqian Chai. For the study, researchers scanned the brains of 15 adult English speakers who were about to begin an intensive 12-week French course, and then tested their language abilities both before and after the course. Participants with stronger connections between the left left anterior operculum and an important region of the brain's language network called the left superior temporal gyrus showed greater improvement in the speaking test. However, that doesn't mean success at a second language is entirely predetermined by the brain's wiring. How the brain is wired determines whether someone can learn a second language easily Photo: ALAMY

EDUCATION FOR SOLIDARITY: The Butterfly Circus Activities Before watching the film ASK STUDENTS:* Some people get a butterfly tatooed. Do you know what symbolic meaning it may have? POSSIBLE ANSWER: The butterfly is a symbol of transformation or change, love and joy. Homebuilt pickups and trailer hitches: How underage teens skirt the law to drive in Photos by the author. [Editor’s Note: Ronan Glon of Ran When Parked recently took a trip to the Swedish countryside, where he discovered a sneaky (and legal) way some teens there have figured out how to drive before the legal age.] Some of the most interesting cars that Sweden has to offer are hiding in small, rural towns, not in museums. That’s because 15-year-olds are allowed to drive virtually any type of car if it’s been converted into a two-seater pickup, and modified to top out at about 20 MPH. These home-made pickups are considered tractors by Swedish law, and they’ve been around for nearly a century.

10 Intriguing Photographs to Teach Close Reading and Visual Thinking Skills - NYTimes.com Photo Updated, March 17, 2016 | We have published a companion piece: “8 Compelling Mini-Documentaries to Teach Close Reading and Critical Thinking Skills.” Ever want your students to slow down and notice details when they read — whether they’re perusing a book, a poem, a map or a political cartoon? Young people often want to hurry up and make meaning via a quick skim or a cursory glance when a text can demand patience and focus. Closely reading any text, whether written or visual, requires that students proceed more slowly and methodically, noticing details, making connections and asking questions.