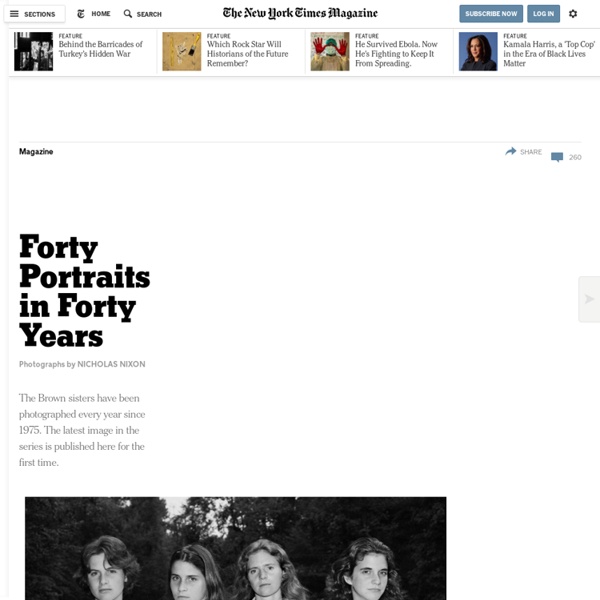 Text by SUSAN MINOT Nicholas Nixon was visiting his wife’s family when, “on a whim,” he said, he asked her and her three sisters if he could take their picture. It was summer 1975, and a black-and-white photograph of four young women — elbows casually attenuated, in summer shirts and pants, standing pale and luminous against a velvety background of trees and lawn — was the result. A year later, at the graduation of one of the sisters, while readying a shot of them, he suggested they line up in the same order. After he saw the image, he asked them if they might do it every year. “They seemed O.K. with it,” he said; thus began a project that has spanned almost his whole career. Who are these sisters? Whenever a woman is photographed, the issue of her vanity is inevitably raised, but Nixon has finessed this with his choice of natural light, casual manner and unfussy preparation. Throughout this series, we watch these women age, undergoing life’s most humbling experience. Related:  Relatively

A few things you shouldn't say to a childless woman Not all women can have babies or want to have babies. Photo: Kylie Pickett There are two words for the woman who reached over the table, grabbed my hand and in a consolatory tone announced, ''It's a tragedy you never got around to having children. It's the most wonderful thing a woman can do.'' Those words are ''shut'' and ''up'' (the printable response) or, more charitably, ''think'' and ''first''. Because it doesn't take Freud to work out this statement was patronising, assumptive and just plain insensitive. The would-be Buddhist in me told me these were her issues. But I still wanted to thump her. Advertisement Most of the childless women I know do find peace with their circumstances, even if it takes some time. I believe children are a gift and not a given in life, and those who receive should be grateful. A guised compliment does not a sympathetic or empathetic person make. A friend of mine who is a well-known celebrity understands this.

Six degrees of separation Six degrees of separation. Early conceptions[edit] Shrinking world[edit] Theories on optimal design of cities, city traffic flows, neighborhoods and demographics were in vogue after World War I. As a result of this hypothesis, Karinthy's characters believed that any two individuals could be connected through at most five acquaintances. A fascinating game grew out of this discussion. This idea both directly and indirectly influenced a great deal of early thought on social networks. Small world[edit] Michael Gurevich conducted seminal work in his empirical study of the structure of social networks in his 1961 Massachusetts Institute of Technology PhD dissertation under Ithiel de Sola Pool.[4] Mathematician Manfred Kochen, an Austrian who had been involved in urban design, extrapolated these empirical results in a mathematical manuscript, Contacts and Influences,[5] concluding that in a U.S. Continued research: Small World Project[edit] Research[edit] Computer networks[edit] Find Satoshi[edit]

Egalitarianism 1. Preliminary Distinctions Egalitarianism is a contested concept in social and political thought. One might care about human equality in many ways, for many reasons. As currently used, the label “egalitarian” does not necessarily indicate that the doctrine so called holds that it is desirable that people's condition be made the same in any respect or that people ought to be treated the same in any respect. Egalitarianism can be instrumental or non-instrumental. Equality of any sort might be valued conditionally or unconditionally. Equality might be deemed to be desirable or undesirable. For those who regard equality as a requirement of justice, the question arises, whether this is a timeless unchanging or instead a variable requirement. Egalitarianism can be formulated with a variety of roles in mind. Given some specification of the kind of equality that is under consideration, it is clear what it means to say of a number of people that they are equal in the stated respect. 2. 3. 4.

Egalitarianism | Theopedia Egalitarianism, within Christianity, is a movement based on the theological view that not only are all people equal before God in their personhood, but there are no gender-based limitations of what functions or roles each can fulfill in the home, the church, and the society. It is sometimes referred to as biblical equality. Egalitarians understand the Bible as teaching the fundamental equality of women and men of all racial and ethnic groups, all economic classes, and all age groups, based on the teachings and example of Jesus Christ. It should not be confused with secular political, economic, social egalitarianism. Among evangelicals, particularly in the last few decades, two rather different paradigms concerning roles of men and women presented in Scripture have emerged. Multimedia Etymology The term Egalitarian is derived from the French word égal, meaning "equal." The Egalitarian position The Egalitarian position is usually characterized by: Roles in marriage Roles in the Church History

Tumblr Gender & Discourse Deborah Tannen New York: Oxford University Press, 1994 203 pp., $19.95 Wesley N. Shellen Communication Studies University of Montana-Missoula Gender & Discourse is Deborah Tannen's fifteenth book published during a prolific career as Professor of Linguistics at Georgetown University. It is also her fourth book about communication between men and women. In 1990 she published a book for general readers titled You Just Don't Understand: Women and Men in Conversation. What may surprise many readers is that this is not really a book about differences in the ways men and women talk. Her first two chapters are excellent examples of Deborah Tannen's style and sociolinguistic philosophy. The next essay, "Interpreting Interruption in Conversation," extends the relativity theme in a detailed analysis of the research on interruptions between men and women. Tannen's third essay is a developmental study of gender differences in physical alignment and topic coherence. Contents | Home

Family Sovereignty : The Compleat Mother by Jenny Marie Hatch Sovereign, the buzzword in Internet circles also has applications for the family. Why? Over the past decades a shift has occurred in the hearts and minds of some parents. Why? What does this mean for the modern husband and wife? Scriptures from Genesis to the Ephesians talk about a man leaving his Father and Mother, and joining with his wife and they two shall be one flesh. As parents and families gradually wean from the structures that are available for education, health care, and finances, I think it is important to have a clear understanding why we are leaving Babylon for Zion. In my Mothering these past eleven years I have been blessed to have many close friends who are highly educated, self declared liberals. I see our generation of parents as being those who MUST understand truth in all areas of our lives. We will honor our parents for giving us life. I believe most of the problems we encounter as parents can be summed up in one word - KNOWLEDGE.