The Age of Megacities 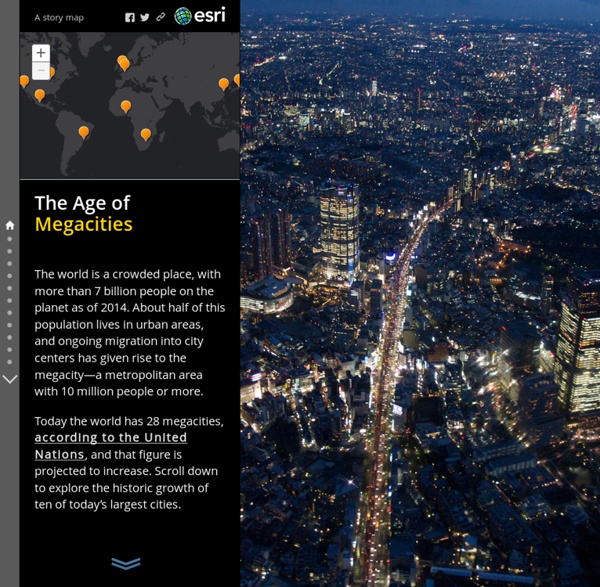 The world is a crowded place, with more than 7 billion people on the planet as of 2014. About half of this population lives in urban areas, and ongoing migration into city centers has given rise to the megacity—a metropolitan area with 10 million people or more. Today the world has 28 megacities, according to the United Nations, and that figure is projected to increase. Scroll down to explore the historic growth of ten of today’s largest cities. Right: Tokyo's Roppongi district. Tokyo is the world's largest city. Photo by Lukas - Licensed under Creative Commons

Megacity A megacity is usually defined as a metropolitan area with a total population in excess of ten million people.[1] A megacity can be a single metropolitan area or two or more metropolitan areas that converge. The terms conurbation, metropolis and metroplex are also applied to the latter. As of 2016, there are 35 megacities in existence, Chennai being the latest. The largest of these are the metropolitan areas of Tokyo and Jakarta, each of these having a population of over 30 million inhabitants. National Geographic This interactive was built in conjunction with National Geographic’s Future of Food series. The data was sourced from FAOSTAT. Values reflect domestic utilization for food consumption in each country or region from 1961 to 2011. Food groupings and units of measure vary slightly from those depicted on the FAOSTAT site. Download the data from here.

Streets of London Leaflet | Map data © OpenStreetMap contributors, CC-BY-SA, Imagery © CartoDB Made by Google Maps Mania The 10 Most Livable Global Cities For Balancing Work And Play How do the world’s biggest cities stack up against each other in terms of their livability? Every day seems to bring a different sort of ranking, and comparing the different rankings can end up highlighting more about the rankings themselves than any given city on them. A new study, published in the World Review of Science, Technology, and Sustainable Development, tries to make sense of where seven different global city livability rankings overlap and why. Among the seven, it also examines its own new index, which unsurprisingly, it evaluates as the most "balanced" of the group. According to the authors, who are three researchers from the Asia Competitive Institute in Singapore, the University of California, Davis, and Curtin University in Australia, existing major livability indices can be divided into two groups.

Bangkok Becomes First Megacity to Mull Move to Higher Ground November 25th, 2011 by Susan Kraemer After another year marked by months of epic flooding in the capital city of 12 million, this month AFP reports that lawmakers in Thailand have submitted a parliamentary motion to begin discussions of building a second capital or moving Bangkok to higher ground. Sataporn Maneerat, a Puea Thai party MP, told AFP Thailand should think about moving the capital or looking to another city for future developments and investments. “Another 19 Puea Thai MPs and I have signed and submitted a motion to parliament to seek approval to set up a committee, to consider whether the capital should be moved or if Thailand should have a second capital,” he said. “Bangkok is sinking every year. The capital will face more and more problems from natural disasters and the environment,” he said, adding that the current capital was “over its peak”.

23 Photos Of People From All Over The World Next To How Much Food They Eat Per Day Posted May 04, by Beej Rudd Marble Moahi, Mother Living with HIV/AIDS, Botswana – 900 Calories Munna Kailash, Bicycle Rickshaw Driver, India – 2,400 Calories The Game of Norway Crown Prince Fredrik 6 takes control of Denmark-Norway via a coup. The great Norwegian merchant Bernt Anker calls him the "next Trajan" and see an enlightened and liberal monarch that can serve as the focal point for the kingdom. Danish Foreign Minister AP Bernstorff die, and Crown Prince Frederick put earnest their political will through all questions. The following year he accepts the request from a Dutch merchant that a Danish fleet convoys to protect merchant ships on their way from the Dutch East Indies to Copenhagen. The evolution of London: the city's near-2,000 year history mapped How did London evolve from its creation as a Roman city in 43AD to the crowded, chaotic megacity we see today? The London Evolution Animation takes a holistic view of what was built in the capital during different historical periods – what has been lost, what saved and what protected. Greater London covers 600 square miles, however up until the 17th century the capital was largely crammed into a single square mile, marked by the skyscrapers of the financial City today. The visualisation, originally created for the Almost Lost exhibition by the Bartlett Centre for Advanced Spatial Analysis (Casa), explores the development of the city through the evolution of the road network and preserved buildings. Unlike other historical cities such as Athens or Rome, where there is an obvious patchwork of areas from different periods, London's scheduled sites and listed buildings are individual structures, in many cases assembled gradually by parts from many different periods.

Our Favorite Maps of the Year Cover Everything From Bayous to Bullet Trains "I really love the challenge of making new things look old," said mapmaker Stephen Smith. He was inspired to make this map of US natural resources by a similar British map from around 1940 that he came across in the Boston Public Library. "Many people told me my map reminded them of their grade school wall atlas," he said.

Dar es Salaam: Africa's next megacity? 30 July 2012Last updated at 20:34 ET By Joe Boyle BBC News, Dar es Salaam Visionaries hope for a modern metropolis modelled on Singapore, but pessimists fear the emergence of another dirt-poor city of slums. Dar es Salaam is one of the world's fastest growing cities, and it has reached its tipping point. In the dark basement of the cavernous Kariakoo market, dozens of traders gather at tiny makeshift stalls, arranging fruit and vegetables into neat piles. This part of the market has the least sought-after plots, and all of the stallholders have one thing in common: none of them was born in Dar es Salaam.