Voyage to the English speaking world 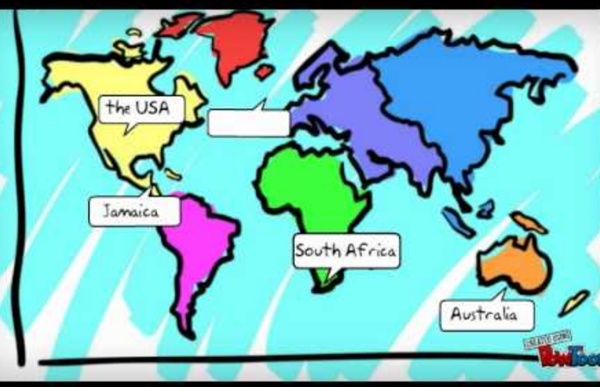 WebEnglish.se Background English Speaking Countries A list of 87 countries where English is spoken as a first or an official second language Warm-up World Englishes (1:09) 30 countries with a million English speakers shown on a map Chapters English Conquers the World A traditional reading chapter about how English started spreading around the worldEnglish Conquers the World Activities Comprehension and language activities to go with the text (year 8-9) Let's talk about the UK (still with Scotland) At the beginning of the new school year teachers usually explain to their students what they are going to study. Sometimes efl teachers not only teach grammar but also British culture, so one of the first cultural topics they discuss with their students are the geography of the UK and its form of government. Here you can find an interactive mindmap, a digital poster and a collection of useful websites, just to simplify the work. Click on the Glogster digital poster below, you will find general information about the United Kingdom and some videos. Now take a look at my Cacoo mindmap below about the UK form of government.

Differences Between American and British English By Kenneth Beare While there are certainly many more varieties of English, American English and British English are the two varieties that are taught in most ESL/EFL programs. Generally, it is agreed that no one version is "correct" however, there are certainly preferences in use. Wales profile - Overview 15 January 2013Last updated at 06:19 ET Wales, a part of the United Kingdom, has retained its distinctive culture and has enjoyed a degree of autonomy since 1999. It includes a heavily industrialised south, a largely-Anglicised and prosperous farming east, and a Welsh-speaking, hill-farming North and West. Wales' devolved government - home rule - is now acquiring more powers and its economy is refocusing on light industry, tourism and financial services, but a small population and poor transport infrastructure continue to make development uneven. Welsh identity and the Welsh language have received a boost from an enlivened popular culture scene in the 1990s, and from the devolution of power from the central government in London to the Welsh National Assembly in Cardiff.

New York 4-9 ⋆ Elementary, Intermediate, Themes Songs I LOVE NY (2:20) A song about the famous places (any age)Frank Sinatra – New York, New York (4:18) (any age) with Listening Activities (5-9) Worksheets Places in the city – vocabulary A wordlist with definitions (yr 4-6)New York City sights A handout with pictures and names of the sights to match (yr 4-8)53 FREE ESL new york worksheets form iSLCollectives. FASTEN SEAT BELTS 2 - Travel by Continent - Europe Fasten Seat Belts, a light hearted guide to avoid misunderstandings while travelling. An innovative way to learn languages and pick up cultural tips. Travel by Continent / Europe In the Netherlands, it is the custom on someone's birthday to...

5 TED-Ed Lessons to use in your American History classroom Carla Staffa, Burnsville Senior High School American history teacher (and all-around rockstar), uses TED-Ed Lessons in her classroom to supplement her curriculum, start conversation and spark curiosity. We caught up with Carla to find out which lessons she uses the most and what she hopes her students take away from each one. 1.) The fight for the right to vote in the United States - Nicki Beaman Griffin “The fight for the acquisition of voting rights is one that has been fought by numerous groups, yet not all eligible voters take advantage of this right. Students see the chronology of voting rights actions and legislation, and are left with thought provoking questions at the end: “Do enough citizens have the right to vote now?

United Kingdom country profile - Overview 12 November 2014Last updated at 07:38 ET The United Kingdom is made up of England, Wales, Scotland and Northern Ireland. It has a long history as a major player in international affairs and fulfils an important role in the EU, UN and Nato. The twentieth century saw Britain having to redefine its place in the world. At the beginning of the century, it commanded a world-wide empire as the foremost global power. Two world wars and the end of empire diminished its role, but the UK remains an economic and military power, with considerable political and cultural influence around the world.

School Years around the World World and News > World Stats and Facts by Mark Hughes Somewhere in the world, right now, students are hard at work in school. With over 190 nations spanning the globe’s 24 time zones, students and their academic years come in a variety of forms. Here’s a sampling of the typical school year in 13 nations throughout the world. Australia TeachingEnglish In this lesson students practise word building in preparation for part 3 of the Use of English test in the FCE exam. Through a series of activities students will become more aware of word ‘families’, enabling them to do the Use of English (part 3) more successfully. Topic: Weird museums - word building for FCE Use of English part 3 Level: B2 Aims: To remind students how to form new words from a ‘stem’ word.To familiarise students with part 3 of the Use of English test of the FCE exam.To extend students’ vocabulary by practising forming new words from stem words.

Project-based learning, the USA and Authentic Video in the EFL classroom The Globe Trekker/Pilot Guides video collection is a treasure trove for any English teacher. It encompasses extensive material from every corner of the world, and especially English-speaking countries are lavished with attention. Australia, Canada, Scotland, Wales, Ireland, England – you name it. England profile - Overview 13 December 2012Last updated at 11:48 ET England is the largest constituent part of the United Kingdom, and accounts for 83 per cent of its population and most of its economic activity. Issues affecting the United Kingdom as a whole therefore also apply to England in particular, especially in the case of identity politics. England's continuing contribution to world civilisation is significant, ranging from language to sport, music and law.

Dr Ciaran O'Keeffe: Six reasons why we should celebrate Halloween - Dr Ciaran O'Keeffe Reverend J John argues today that far from being a harmless celebration, Halloween celebrates evil and trivialises death and deformity. He says it subverts messages we would usually wish to promote - such as warning children not to take sweets from strangers - and glorifies everything that is evil and unpleasant. But I am here to step in and defend Halloween as something frivolously fun that deserved to be celebrated. Here's why... 1. The Origin of Halloween