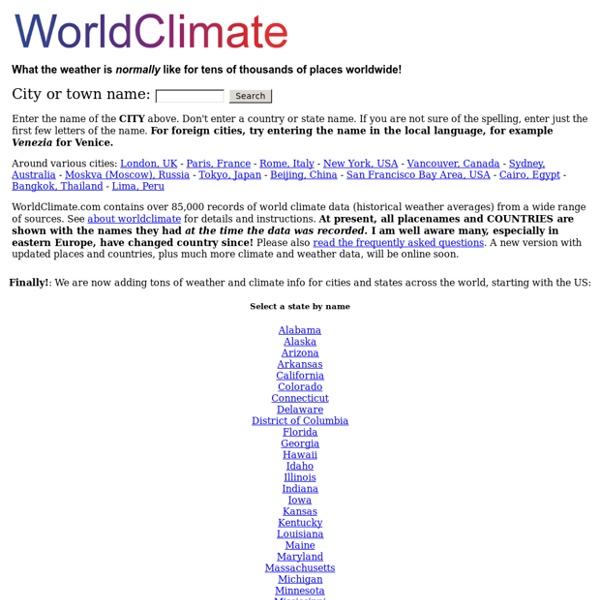 What the weather is normally like for tens of thousands of places worldwide! Enter the name of the CITY above. Don't enter a country or state name. If you are not sure of the spelling, enter just the first few letters of the name. For foreign cities, try entering the name in the local language, for example Venezia for Venice. Around various cities: London, UK - Paris, France - Rome, Italy - New York, USA - Vancouver, Canada - Sydney, Australia - Moskva (Moscow), Russia - Tokyo, Japan - Beijing, China - San Francisco Bay Area, USA - Cairo, Egypt - Bangkok, Thailand - Lima, Peru

Australian Carbon Dioxide Emissions As the government confirms it intends to move from a fixed price on emissions to a trading scheme, now is a good time to review where Australia sits with regard to carbon emissions. The most recent data on Australia's carbon emissions comes from the latest quarterly update of Australia's National Greenhouse Gas Inventory, released in April this year. The report shows a small, 0.4% increase in the emissions "trend" figure for December 2012 over the previous quarter. The trend line smooths out "background noise" in emissions measurements from seasonal and weather changes. Click here for the graph on mobile.

The Arkiv R2 Field Pack / Completely Weatherproof Modular Backpack Made in the USA with a Lifetime Warranty. The R2 Field Packs allow for the secure and simple attachment of weatherproof accessories to the exterior of the bag. The patented Arkiv® modular system gives the bag freedom to evolve and adapt as needed. The R2 series is equipped with two Arkiv rails for a multitude of carry options in a minimalist design. Accessories range from simple cell phone pouches and tool pockets to larger organizers and laptop sleeves.

The World Factbook The Office of Public Affairs (OPA) is the single point of contact for all inquiries about the Central Intelligence Agency (CIA). We read every letter, fax, or e-mail we receive, and we will convey your comments to CIA officials outside OPA as appropriate. However, with limited staff and resources, we simply cannot respond to all who write to us. Contact Information Submit questions or comments online By postal mail: Central Intelligence Agency Office of Public Affairs Washington, D.C. 20505

Travel then and now: oh how you’ve changed In the wake of September 11, America created the Transport Security Administration, a serious ramping-up of security procedures for airline travellers. Fingerprint and retina scanning, embarrassing x-rays - it's been quite the evolution. An evolution that seems to have lead to a loss of innocence. Remember back in the day when, if you were a cute enough kid, you could actually visit the cockpit without suspicion of being a cunningly disguised batch of anthrax?