10 Forgotten Nations That Once Ruled The Land 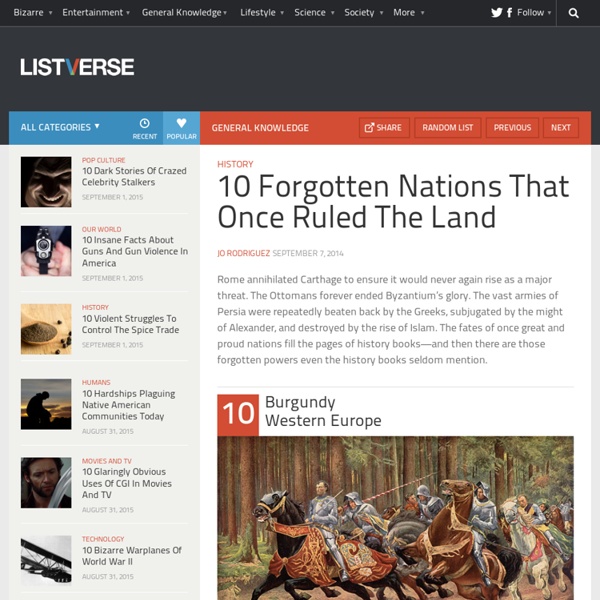 History Rome annihilated Carthage to ensure it would never again rise as a major threat. The Ottomans forever ended Byzantium’s glory. The vast armies of Persia were repeatedly beaten back by the Greeks, subjugated by the might of Alexander, and destroyed by the rise of Islam. 10BurgundyWestern Europe France’s greatest historical rivals are often considered to be England or Germany. We’ve previously mentioned how Louis the Pious, son of Charlemagne, divided the Carolingian Empire among his sons. For a time, it seemed that fortune favored Burgundy. 9NovgorodEastern Europe The city of Novgorod, whose residents sometimes called it “Lord Novgorod the Great,” truly lived up to its name. By the 14th century, Novgorod had become one of the busiest trading ports in Europe—an estimated 400,000 people lived in the city. Sadly, this state of affairs wouldn’t last forever. Ivan III, also known as “Ivan the Great,” invaded the city in 1471, subsequently annexing it in 1478. 6MajapahitSoutheast Asia Related:  History • Reading • History

11 Things You May Not Know About Ancient Egypt — HISTORY Lists Ancient Egypt stood as one of the world’s most advanced civilizations for nearly 3,000 years and created a culture so rich that it has spawned its own field of study. But while Egyptian art, architecture and burial methods have become enduring objects of fascination, there is still a lot you probably don’t know about these famed builders of the pyramids. From the earliest recorded peace treaty to ancient board games, find out 11 surprising facts about the Gift of the Nile. Along with King Tut, perhaps no figure is more famously associated with ancient Egypt than Cleopatra VII. But while she was born in Alexandria, Cleopatra was actually part of a long line of Greek Macedonians originally descended from Ptolemy I, one of Alexander the Great’s most trusted lieutenants. For over two centuries the Egyptians fought against the Hittite Empire for control of lands in modern day Syria. After a long day’s work along the Nile River, Egyptians often relaxed by playing board games.

How All 50 States Got Their Names Alabama Before Europeans landed on American shores, the upper stretches of the Alabama River in present-day Alabama used to be the home lands of a Native American tribe called – drum roll, please – the Alabama (Albaamaha in their own tribal language). The river and the state both take their names from the tribe, that's clear enough, but the meaning of the name was another matter. Despite a wealth of recorded encounters with the tribe – Hernando de Soto was the first to make contact with them, followed by other Spanish, French and British explorers and settlers (who referred to the tribe, variously, as the Albama, Alebamon, Alibama, Alibamou, Alibamon, Alabamu, Allibamou, Alibamo and Alibamu) – there are no explanations of the name's meaning in the accounts of early explorers, so if the Europeans asked, they don't appear to have gotten an answer. An un-bylined article in the July 27, 1842 edition of the Jacksonville Republican put forth the idea that the word meant “here we rest.” Alaska

The Church from Byzantium to the Ottomans - TASTE OF THE PAST Niki Gamm If the Eastern Orthodox Churches had not split from the Roman Catholic Church in 1054, the Ottoman Turks would have found it much more difficult to conquer Constantinople The Catholic Church of St. Anthony of Padua in Istanbul. The break between the Eastern Orthodox Churches and the Roman Catholic Church is dated to 1054, although some believe the circumstances that led up to the rupture started nearly 900 years earlier. While the actions of the two men in hindsight seem slight, they had serious consequences – most importantly the Byzantine emperor could not appeal to the West for aid against the Turks without alienating his subjects who were members of the Orthodox Church. Following the re-conquest of Constantinople by the Nicaean Greeks under Emperor Michael VIII Palaeologus in 1261, there were further attempts at reuniting the two churches. Meetings were held, especially a last one in Florence in 1439 resulted in the signing of a decree of reunion. After the 1453 conquest

World Digital Library Home 10 Ways We're All Picturing The Ancient World Incorrectly Thanks to countless books, movies, and trashy TV shows, most of us have a fairly firm mental image of the ancient world. Togas, feasting, gladiatorial combat . . . the standard stuff. Yet step back in time, and you’d be confronted with a world that confounded your expectations. Far from being a close approximation of the truth, our collective mental image of the ancient world may be nothing like reality at all. 10Ancient Britain Had African Citizens Although London is one of the most multicultural cities on Earth, it’s only been in the last century or so that minorities have become a familiar sight in Britain. In 2010, researchers at Reading University found evidence that Roman York had been home to individuals of North African descent. This multicultural history didn’t end with the fall of Rome. 9Neanderthals Were Seriously Intelligent “Neanderthal” is a synonym for “idiot,” a reminder that before we became kings of the planet, we first had to wipe out our stupider cousins. Take flour.

What Vikings really looked like The fine decoration of the Oseberg ship in Norway, which was buried in the year 834, provides clues to what Vikings looked like. Inside the ship were two women and the archaeologists believe the ship has served as a sarcophagus. (Photo: Annie Dalbéra) There’s no shortage of myths about the appearance of our notorious Viking ancestors. To find out more about these myths, ScienceNordic’s Danish partner site, videnskab.dk, asked its Facebook readers to list their favourite myths about what the Vikings looked like. We have picked out five myths from the resulting debate and asked researchers to help us confirm or bust these myths. Armed with this information, our graphic designer then took a shot at drawing some examples of our infamous forefathers, which you can see in our picture gallery. The five myths are: MYTH 1: Vikings were dirty and unkempt Unwashed, rough warriors with froth hanging out of the corners of the mouth. But that’s unlikely to be true: It wasn’t enough just to be clean.

The Discoverers In "A Personal Note to the Reader" Boorstin writes, "My hero is Man, the Discoverer. The world we now view from the literate West...had to be opened by countless Columbuses. In the deep recesses of the past, they remain anonymous." Themes[edit] The role of religion and culture is another recurring theme. He suggests that Jews and Christians, primarily from Western Europe, came to believe that the Creator wished them to unravel the secrets of His universe. A third theme is the role of tradition and experience in shaping mankind's history. "I have observed that the world has suffered far less from ignorance than from pretensions to knowledge. Despite the fact that he served as director of the Smithsonian National Museum of History and Technology, he was a sharp critic of what he perceived as the institution's growing political correctness. Criticism[edit] Boorstin's writing has been praised, but he has also had his critics. Table of Contents[edit] Book One - Time[edit] 1. 2. 3. 1. 2. 3. 4.

Historicity Historicity is the historical actuality of persons and events, meaning the quality of being part of history as opposed to being a historical myth, legend, or fiction. Historicity focuses on the truth value of knowledge claims about the past (denoting historical actuality, authenticity, and factuality.) The historicity of a claim about the past is its factual status.[1][2] Some theoreticians characterize historicity as a dimension of all natural phenomena that take place in space and time. Questions regarding historicity concern not just the issue of "what really happened," but also the issue of how modern observers can come to know "what really happened Questions of historicity are particularly relevant to partisan or poetic accounts of past events. Questions of historicity also arise frequently in relation to historical studies of religion. See also[edit] References[edit] Jump up ^ Wandersee, J.

Home of the Book Genome Project We haven't turned on user accounts yet, which will allow you to save preferences, bookshelves, and have customized suggestions as the tools learn more about your particular tastes. If you'd like us to let you know when we roll out user accounts, enter your e-mail address below, and we'll keep you posted. Today's uniquely unique title: What BookLamp Does: BookLamp.org is the home of the Book Genome Project. BookLamp's engine isn't influenced by advertising budgets or popularity bias. We Need Your Help: MAP: Imperial Russia By the middle of the 19th century, the Russian Empire comprised more than 15 percent of the Earth’s land mass spanning parts of three continents, Europe, Asia, and North America. The population of the empire included not only Russians, but also Ukrainians, Belarusians, Finns, Poles, Armenians, Azerbaijanis, Tatars, Uzbeks, Kazakhs, Germans, and many other ethnic, linguistic, and religious groups. Russians were proud of the empire and used various means to celebrate its scale and diversity. Presented here are two sets of cards, circa 1800-33 and 1856, in which each card corresponds to a particular province or other administrative subdivision of the empire. Each card contains the map and coat of arms of the province and provides additional information about geographic features, cities, people, and local costumes.

A Year on the Medieval Farm What did medieval peasants do on a farm? Some documents from the period offer insights into the agricultural activities throughout the year. One of these works was the Liber ruralium commodorum, written by Pietro de’ Crescenzi around 1304-09. This treatise about agriculture offered advice on all kinds of things to be done on the medieval farm, ranging from beekeeping to winemaking, and includes a chapter detailing a monthly calendar of tasks. This work became very popular in the later Middle Ages, with numerous manuscripts and print versions coming out. Each spring would see the medieval farmers plant their fields and prepare their own gardens, as well as collect the wool from sheep. As the autumn moved into winter, work on the farm decreased but some of the outstanding chores could including repairing buildings, gathering firewood and bringing the animals in from the fields. Some of our other stories about medieval agriculture: A Medieval How-to Book for Shepherds Want more medieval?