Welcome to your planet - Planet Labs 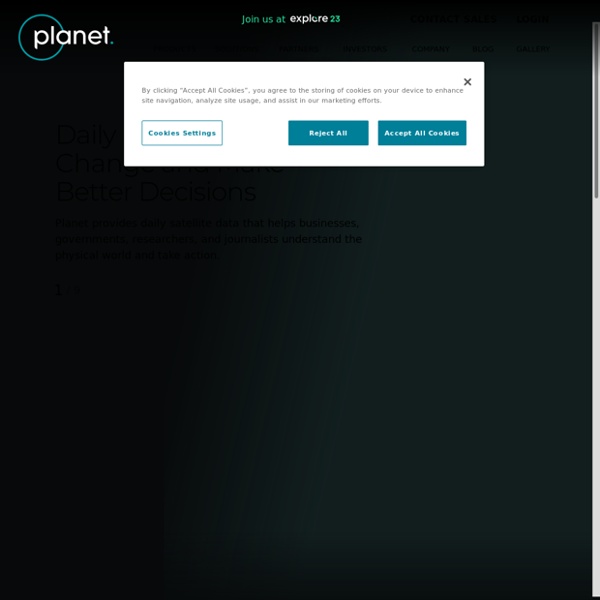 mars by 2033 A Mandate For Humanity Both chambers of Congress just passed the NASA Authorization Act of 2017. With this transformative development, the space agency got a lot more than just $19.508 billion in funding. They also got a very clear mandate: Get humanity to Mars. To be clear, Mars has been in the works for some time; however, the 2017 Act places a strong emphasis on this goal, making it the focal point of NASA’s long-term plans. In the document, congress asserts that the space agency is to get humans “near or on the surface of Mars in the 2030s.”

Origin of crops by Colin K. Khoury, Harold A. Achicanoy, Carlos Navarro-Racines, Steven Sotelo, and Andy Jarvis at the International Center for Tropical Agriculture (CIAT). Version 1.0 (May 2016). Space submarines will allow us to explore the seas of icy moons One of the most profound and exciting breakthroughs in planetary science in the last two decades has been the discovery of liquid methane lakes on the surface of Saturn’s largest moon Titan, and liquid oceans under the icy surfaces of many of the giant gas planets’ other moons. Thrillingly, these some of these “waters” may actually harbour life. Unfortunately, we don’t know much about them. Probes such as Juno and Cassini can only get so close. Also, subsurface oceans can only be sensed indirectly. The European Space Agency’s Huygens probe did land on Titan in 2005, but on a solid surface rather than on liquid.

Semantic Search The Problem with basic Search Engines Old search engines do not understand people’s natural language. If you have a lot of redundant email traffic it’s because people are struggling to find answers. When this happens customer support gets bombarded with common questions. If your support center operates on an older search engine your agents too will struggle to find answers to common and more challenging support issues. Semantic Search is the Solution

How ancient Aboriginal star maps have shaped Australia's highway network The next time you’re driving down a country road in outback Australia, consider there’s a good chance that very route was originally mapped out by Aboriginal people perhaps thousands of years before Europeans came to Australia. And like today, they turned to the skies to aid their navigation. Except instead of using a GPS network, they used the stars above to help guide their travels. Aboriginal people have rich astronomical traditions, but we know relatively little about their navigational abilities. We do know that there was a very well established and extensive network of trade routes in operation before 1788. These were used by Aboriginal people for trading in goods and stories, and the trade routes covered vast distances across the Australian continent.

Thank You, Houston: Unsung Heroes Star in New 'Mission Control' Doc A riveting new documentary about NASA's journey to the moon pays tribute to the many behind-the-scenes heroes of the Apollo program. "Mission Control: The Unsung Heroes of Apollo," which hits movie theaters today (April 14), tells the story of the men whose strenuous work put the first astronauts on the moon and launched a new era of human spaceflight. Along with plenty of archival NASA videos and photos, the documentary features several of the original flight-control staff who worked in the Manned Spacecraft Center (later renamed the Christopher C. Kraft Jr.

Vuforia Augmented Reality for 3D Mobile Content ©2015 Qualcomm Technologies, Inc. and/or its affiliated companies. Nothing in these materials is an offer to sell any of the components or devices referenced herein. References to "Qualcomm"; may mean Qualcomm Incorporated, or subsidiaries or business units within the Qualcomm corporate structure, as applicable. Materials that are as of a specific date, including but not limited to press releases, presentations, blog posts and webcasts, may have been superseded by subsequent events or disclosures.

Walk through the Continents - Print Maps Large and Small - Free Print free maps large or small; from 1 page to almost 7 feet across; PC or Mac. For classroom and student use. MegaMaps requires Adobe Flash. Free online software—no downloading or installation. Big Peanut-Shaped Asteroid Caught on Radar as It Zooms by Earth (Video) An asteroid that zoomed by Earth today (April 19) at less than five times the distance between the Earth and the moon has been caught on radar. The new images, which were taken yesterday (April 18), capture features on the near-Earth asteroid 2014 JO25 as small as 25 feet (7.5 meters) across, scientists said. The photos — which were combined to make this video of asteroid 2014 JO25 — reveal that the space rock rotates once every 5 hours and has a peanut-like structure, with the larger of the two lobes about 2,000 feet (620 m) wide. "The asteroid has a contact binary structure — two lobes connected by a neck-like region," Shantanu Naidu, a scientist from NASA's Jet Propulsion Laboratory in Pasadena, California, who led the observations, said in a statement. "The images show flat facets, concavities and angular topography."