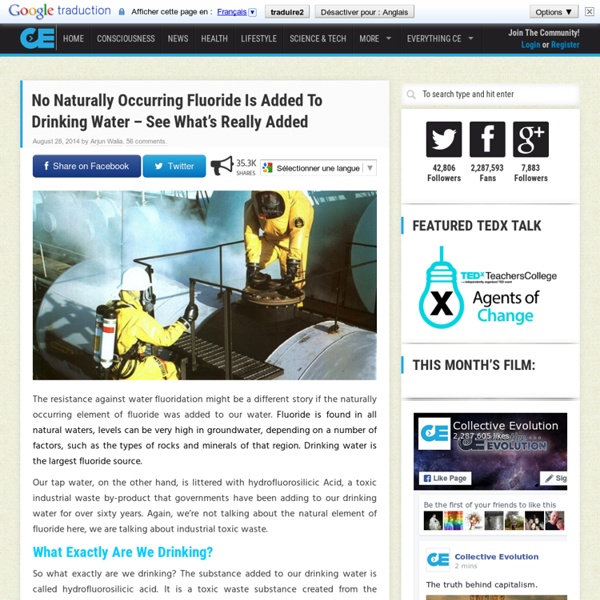 The resistance against water fluoridation might be a different story if the naturally occurring element of fluoride was added to our water. Fluoride is found in all natural waters, levels can be very high in groundwater, depending on a number of factors, such as the types of rocks and minerals of that region. Drinking water is the largest fluoride source. Our tap water, on the other hand, is littered with hydrofluorosilicic Acid, a toxic industrial waste by-product that governments have been adding to our drinking water for over sixty years. Again, we’re not talking about the natural element of fluoride here, we are talking about industrial toxic waste. What Exactly Are We Drinking? So what exactly are we drinking? For example, in the Phosphate Mining & Production Industry, much of the hydrofluorosilicic acid occurs from strip-mined rock. Against Environmental Regulations Industrial practices produce millions and millions of gallons of this liquid hazardous waste. Our Fluoride Documentary

A Failed Science Now Used for Social Control? By Dr. Mercola I've previously written about how your environment and lifestyle, particularly your diet, has a direct influence on your genetic expression. For example, research using identical twins have shown that diet trumps genes in terms of the level of health you achieve. Science Increasingly Used as a Tool for Social Control Latham starts off by discussing a truly blatant example of this type of manufactured PR. 9/11 Firefighter Blows Open WTC 7 Cover-Up by Joe Martino It’s been a little over 13 years since the events of 9/11 took place and yet there is still a huge divide in what the truth is about the events that took place on that day. For some, the idea that the official story is incorrect are mere conspiracy theories while for others it is closer to self evident. Whether it’s Daniel Ganser’s telling revelations about how the official story cannot be true or whether it’s over 2200 architects and engineers who have questioned the official story and scientifically shown how unviable it is, it’s clear that this isn’t simply a conspiracy theory. Eye Witness Firefighter Speaks Out

Unexpected Implications of Industry Involvement in Trans Fat Research By Dr. Mercola I’ve written many articles about the bias inherent in industry-funded research. Climate: 15 scary facts about rising seas (Opinion) Climate change gets couched, especially by skeptics, as an intangible, far-off issue. But meet people who are terrified their country -- everything they know -- will be drowned beneath the waves, and you can see that this is a crisis, and one that must be addressed immediately. I'll write more soon about my time on the islands -- and about the surprising U.S. community where some Marshallese people already are taking refuge from floods. These are topics, by the way, you voted for me to explore as part of my "2 degrees" series on climate change. For now, here's a look at some of the scariest data about how much ocean levels could rise, and when. We're talking about the future here, so estimates vary by source, but the bottom line is this: Our actions today will create the world future generations will have to inhabit.

Monsanto-funded academic shills plot to end all scientific transparency, demand ending Freedom of Information Act to operate in absolute secrecy using public funds (NaturalNews) Monsanto-funded scientists are calling for an end to Freedom of Information Act requests after they were ousted for colluding with the biotech industry to push GMOs and their associated pesticides. Rather than respect the public's right to greater transparency, industry-bought scientists are demanding total SCIENTIFIC SECRECY, deeming FOIA requests "harassment" and "terrorism." The collusion was discovered after the non-profit U.S. Right to Know (USRTK) obtained hundreds of documents and emails revealing the PR strategies of Big Ag, which involves bribing university faculty and staff to manipulate the public and policy makers into believing their products are safe when scientific literature proves otherwise. University of Florida professor Kevin Folta was implicated as being one of the most eager and cooperative taxpayer-funded scientists to comply with biotech giant Monsanto, which dominates the global market for GM crops. Sources:

When science sells out The rise in the dominance of financial and commercial interests sponsoring science on one hand, and an increasingly ideological agenda of government-funded research on the other hand, are thwarting and clouding science’s role to promote insight, innovation and progress. Decline and loss of credibility is the natural consequence when science is used as a means to advance corporate interests or to push ideological agendas. Without a change in course, this decline will endanger American scientific leadership. A recent study by the Pew Research Center in Washington showed that scientists view many important issues differently than the rest of the population. For example, 88 percent of scientists view genetically modified food as safe versus only 37 percent of the general population — a gap of 51 percent.

Projection of the World Population by Level of Education - Our World In Data The International Institute for Applied Systems Analysis (IIASA) is an interdisciplinary, highly-respected research institution near Vienna, Austria. The IIASA population projections are the most cited alternative to the UN work. Interestingly their medium projection – which they consider most likely – stands in stark contrast to the UN projection. While the medium variant of the UN projection sees the world population growing continuously throughout the 21st century the IIASA medium (most likely) scenario see the world population increase to 9.4 billion in 2070 and then starts a slow decline to below 9 billion by the end of the century.