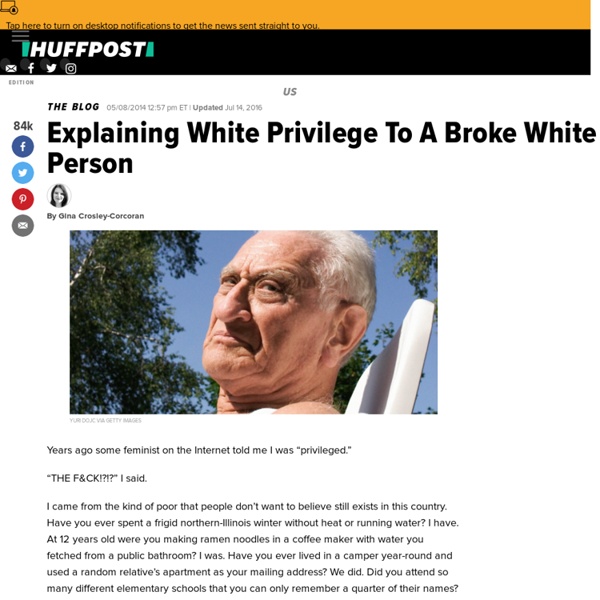 Years ago some feminist on the Internet told me I was “privileged.” I came from the kind of poor that people don’t want to believe still exists in this country. Have you ever spent a frigid northern-Illinois winter without heat or running water? I have. At 12 years old were you making ramen noodles in a coffee maker with water you fetched from a public bathroom? I was. This is actually a much nicer trailer setup than the one I grew up in. So when that feminist told me I had “white privilege,” I told her that my white skin didn’t do shit to prevent me from experiencing poverty. After one reads McIntosh’s powerful essay, it’s impossible to deny that being born with white skin in America affords people certain unearned privileges in life that people of other skin colors simply are not afforded. “I can turn on the television or open to the front page of the paper and see people of my race widely represented.” I do understand that McIntosh’s essay may rub some people the wrong way. 10.

This App Splits Your Dinner Bill According to Societal Racism and Sexism We all know that moment of dread. You’re out with eight friends for a relatively nice dinner. Your vegan roommate has been sulking over a side salad the whole time, while the good-time Charlie of the group is on her fourth glass of wine. Then there are the people who order $24 worth of appetizers and try to make their escape after “throwing a 20 on it,” without even an iota of consideration for the concepts of taxes and tipping. This is hell. Splitting evenly would totally fuck over the self-sustained picky eaters, but itemizing would take forever and likely result in enough bad math to make finalizing the total a nightmare.

White Privilege: Unpacking the Invisible Knapsack by Peggy McIntosh White Privilege: Unpacking the Invisible Knapsack "I was taught to see racism only in individual acts of meanness, not in invisible systems conferring dominance on my group" Peggy McIntosh White Privilege, Explained in One Simple Comic White privilege can be a tricky thing for people to wrap their heads around. If you’ve ever called out white privilege before, chances are you’ve heard responses like “But I’m didn’t ask to be born white!” or “You’re being reverse racist.” The next time that happens, just show the nay-sayer this succinct comic by Jamie Kapp explaining what white privilege is — and what it isn’t. Read more on white privilege and institutionalized racism at Jamie Kapp’s Tumblr page. Jamie Kapp is a 19-year old artist.

Dye-ing Culture : Color Run, White-washing Holi Since 2012 by Nadya Agrawal Co-opt: (v.) 1. divert to or use in a role different from the usual or original one. 2. adopt (an idea or policy) for one’s own use The Color Run™ and other similar ideas like Run or Dye™ is a great and fun way to run with your friends, come together as a community, get showered in colored powder and not have to deal with all that annoying culture that would come if you went to a Holi celebration. Everything You Know About Dinosaur Deaths Is Wrong PRINCETON, N.J. — Ask any T. Rex-obsessed 5-year-old boy how the dinosaurs died and he will tell you a giant asteroid killed them. He might describe a scene with a brontosaurus or two peacefully grazing, oblivious of the space rock whizzing past that will crash to Earth and ignite an explosion with the strength of a billion atomic bombs going off at once. A heat wave engulfs the globe, vaporizing most dinosaurs, with the rest starving to death as an ash cloud blocks the sunlight. The by-now iconic scene comes from a scientific paper first published on June 6, 1980, in Science magazine by a young geologist at the University of California, Berkeley, Walter Alvarez, and his Nobel Prize-winning father, Luis Alvarez. But according to geologist Gerta Keller this is simply not what happened.

3 Common Myths About Gentrification – And the Facts That Prove We Need to Sto... In New York, San Francisco, Chicago, other major cites across the country, people are talking about gentrification. Recently, I’ve been speaking to people randomly about gentrification, one thing I learned, is that people have generally heard the term, but they’re not quite familiar with what it exactly means. One guy said, “Isn’t that when neighborhoods become new? Or is when they’re old, and they get kind of revitalized?” Our understandings of gentrification are quite confused. The stories of a headscarf Muslim women are needed as critical agents of change in this historical transformative moment in Islamic history and the Middle East. Yet it’s tough to be a Muslim woman these days. We’ve become symbols, not individuals. And that’s in no small part thanks to the global fixation on the headscarf. The west might ostensibly value individual identity over collective identity — but not when it comes to a Muslim woman wearing a headscarf.

Entrepreneurs don’t have a special gene for risk—they come from families with money At first, it seems like a small thing. Reuters reports this morning that the European Union is weighing whether to start requiring visas from Canadian and US visitors to the region. This would be an incredibly shortsighted thing to do, given the lucrative tourist trade based on North Americans traveling to the continent. Why should American Muslims Have to Assimilate ? European no-go zones that non-Muslims may not enter have made headlines recently, despite the inconvenient fact that they don’t exist. Because of an overwhelming and unexpected reaction from France and England in particular, Fox News issued an apology for letting anchors and guests repeatedly discuss such zones. Yet there are those who refuse to back down. Case in point: Louisiana Gov. Bobby Jindal, a potential Republican presidential candidate.

Ex-candidate who plotted Muslim massacre released because judge isn’t sure he... A federal judge scuttled a plea agreement reached between prosecutors and attorneys for a former congressional candidate who plotted to massacre Muslims in a community identified by conservative media as a terrorist training camp. Robert Rankin Doggart pleaded guilty in May to one count of interstate communication of threats and faced up to five years in prison. However, U.S. District Court Judge Curtis Collier ordered attorneys who worked out the plea arrangement to show that Doggart’s plot was actually a “true threat,” reported The Chatanoogan. “(The government) has not shown by clear and convincing evidence defendant’s release would pose an unreasonable danger to the community or any particular individual,” Collier ruled. A federal magistrate then reversed her earlier ruling and allowed the 63-year-old Doggart to go free until the case is resolved.

Better Identification of Viking Corpses Reveals: Half of the Warriors Were Female Shieldmaidens are not a myth! A recent archaeological discovery has shattered the stereotype of exclusively male Viking warriors sailing out to war while their long-suffering wives wait at home with baby Vikings. (We knew it! We always knew it.) First woman to lead Friday prayers in UK A Canadian author will become the first Muslim-born woman to lead a mixed-gender British congregation through Friday prayers tomorrow in a highly controversial move that will attempt to spark a debate about the role of female leadership within Islam. Raheel Raza, a rights activist and Toronto-based author, has been asked to lead prayers and deliver the khutbah at a small prayer session in Oxford. She has been invited by Dr Taj Hargey, a self-described imam who preaches an ultra-liberal interpretation of Islam which includes, among other things, that men and women should be allowed to pray together and that female imams should lead mixed congregations in prayer. Three of the four mainstream schools of Sunni Islam allow women to lead exclusively female congregations for prayer, but the overwhelming majority of Muslim jurists are opposed to the notion of their presiding over mixed congregations outside the home.

People in Power Are Quick To Call Out Injustice When They Are Harmed You're being treated unfairly at work. How do you react — voice your concerns or stay quiet? That reaction may indicate whether you're a powerful or powerless person, a study says, but it could also explain how inequality is maintained in society. Powerful people react swiftly when they are victims of unfairness, while less powerful people are slow to notice and react to injustice, according to research published Friday in the Personality and Social Psychology Bulletin.

Being Objectified May Be Linked To Sexual Coercion In Romantic Relationships, Study Says Public discourse around objectification often deals with images we see in the media, from steamy Maxim covers to gratuitously sexual Burger King ads. But how does this cultural focus on appearance make itself felt at the level of one-on-one romantic relationships? A new study suggests that objectification within a relationship is, at best, a serious red flag.