6 Things The Most Organized People Do Every Day 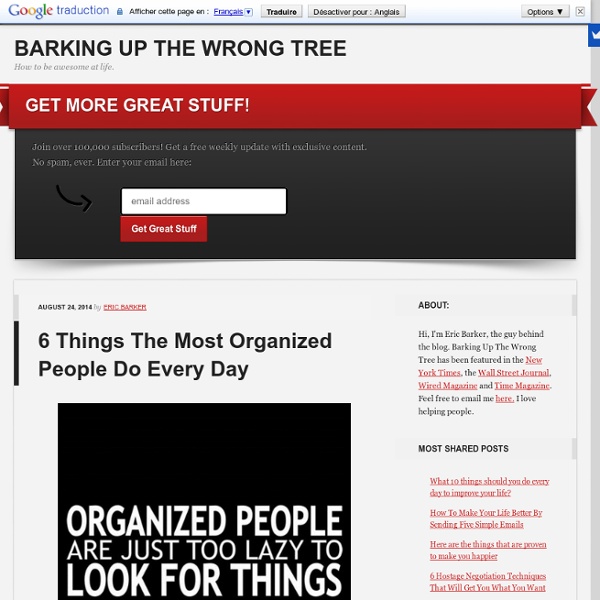 Time Assets vs. Time Debts: A Different Way of Thinking About Productivity Late in his career, Steve Jobs famously drove his car without a license plate. There were all sorts of theories about why Jobs decided to drive without tags. Some people said he didn’t want to be tracked. Others believed he was trying to make a game of avoiding parking tickets. Jon Callas, a former computer security expert who worked for Apple, revealed a different reason. According to Callas, Steve Jobs discovered a loophole in the California vehicle registration laws.

The 4 Most Common Negotiation Mistakes — And How To Avoid Them Miguel Villagran/Getty Russian foreign minister Sergei Lavrov goes to shake hands with former US secretary of state Hillary Clinton. Whether you're looking to close a $2.5 million deal or save money with your cable provider, it may be time to sharpen your negotiation skills. Cue University of Michigan Ross School of Business professor George Siedel. He's taught negotiation classes around the world, and he recently heard from students saying they used his tactics to secure both of the deals above, he tells us. The Online Life Coach In “Hard Choices,” Hillary Clinton writes, “All of us face hard choices.” She goes on, “Life is about making such choices. Our choices and how we handle them shape the people we become.” But what if there were a simpler way—one made in the mold of Silicon Valley, which could use a tidy algorithm to supplant grappling?

The 37 Best Websites to Learn Something New Forget overpriced schools, long days in a crowded classroom, and pitifully poor results. These websites and apps cover myriads of science, art, and technology topics. They will teach you practically anything, from making hummus to building apps in node.js, most of them for free. There is absolutely no excuse for you not to master a new skill, expand your knowledge, or eventually boost your career. You can learn interactively at your own pace and in the comfort of your own home. It’s hard to imagine how much easier it can possibly be.

Process Improvement: This Coach Improved Every Tiny Thing by 1 Percent In 2010, Dave Brailsford faced a tough job. No British cyclist had ever won the Tour de France, but as the new General Manager and Performance Director for Team Sky (Great Britain’s professional cycling team), Brailsford was asked to change that. His approach was simple. Brailsford believed in a concept that he referred to as the “aggregation of marginal gains.” He explained it as “the 1 percent margin for improvement in everything you do.” How To Be Efficient: Dan Ariely's 6 New Secrets To Managing Your Time It’s hard to be efficient. Sometimes it feels like the world doesn’t make any sense. Sometimes you don’t make any sense.

The Most Important Lesson in College: How to Learn by Robert Montenegro Jeffrey J. Selingo writes today in The Washington Post that too many college graduates are entering the workforce without the skills employers are looking for. He cites polls and other pieces of evidence indicating that a whole lot of people attending college today are more or less just there to eat their lunch. In America, there's a facile belief that having a college diploma automatically means you're skilled or accomplished. We place far too much value on the piece of paper rather than the intellectual core of what a diploma is meant to represent.

10 Native iPhone and iPad Apps You Should Replace - Part 3 Source: Apple.com Sometimes you love your iPhone, and other times you wish that it were a little bit different: that its features were more customizable or its native apps were more capable (or at least that you could delete those native apps when they’re just getting in the way). While we can’t change the shortcomings of your iPhone, we can give you some pointers on how to take advantage of one of the biggest benefits of having an iOS device: The huge selection of high-quality apps that developers have built for iOS. A good app can feel like an upgrade to your iPhone, so we’ve gathered the best alternatives for 10 of the major native apps that come preloaded on your device: Photos, Camera, Messages, Mail, Music, Safari, Calendar, Notes, Reminders, and Weather.

Longevity Health: 18 Foods to Help You Live Long and Healthy Want to live to 100? Research shows your diet plays a huge role in how many birthday candles you’ll blow out. The following 18 foods are packed with antioxidants, vitamins, and minerals that have been linked to longevity. Forget About Setting Goals. Focus on This Instead. We all have things that we want to achieve in our lives — getting into the better shape, building a successful business, raising a wonderful family, writing a best-selling book, winning a championship, and so on. And for most of us, the path to those things starts by setting a specific and actionable goal. At least, this is how I approached my life until recently. I would set goals for classes I took, for weights that I wanted to lift in the gym, and for clients I wanted in my business. What I'm starting to realize, however, is that when it comes to actually getting things done and making progress in the areas that are important to you, there is a much better way to do things. It all comes down to the difference between goals and systems.

How To Achieve Work-Life Balance In 5 Steps Achieving work-life balance can look impossible. And, frankly, it seems like it’s getting harder. In the ten years from 1986 to 1996 work-life balance was mentioned in the media 32 times. In 2007 alone it was mentioned 1674 times. Creating a New Mission Statement Photo Forget the New Year’s resolution. This year, try creating a personal mission statement instead. While it is common for businesses to define goals and values with mission statements, most people never take the time to identify their individual senses of purpose.

Related:  More Recently
Related:  Productivity   -  Daisy Girl Scout Leader Resources   -  Our Dear Leader makes a Stand   -  Our Dear Leader & Son, now Our Dear Leader   -  History of a Leader   -  Qualities of a Great Leader   -  the servant leader   -  The Art and Science of Leadership   -  iPad Tips And Tricks | 100 Essential | TCGeeks   -  50 Free Apps We're Most Thankful For   -  Pretentious Title: How I Went From Writing 2,000 Words a Day to 10,000 Words a Day   -  Insync: A Google Docs-Loving Dropbox Rival   -  How To Organize Your Files - Organize With Sandy : Organize With Sandy   -  10 iPad Apps for Web Curation   -  GuideGuide   -  Create Your Own Smartphone App With Infinite Monkeys - No Coding Knowledge Required   -  Problem loading page   -  Start Every Day as a Producer, Not a Consumer   -  Five Best Productivity Methods   -  Habits: How They Form And How To Break Them : NPR   -  Skitch - Snap. Mark up. Send.   -  Any.DO Listă de activități – Aplicații Android pe Google Play   -  How to Train Your Brain and Boost Your Memory Like a USA Memory Champion   -  Microsoft OneNote: Save Ideas and Organize Notes - Apps on Google Play   -  Customer Support Software & Ticketing System | Freshdesk   -  35 Great iPad Apps for Designers, Geeks and Creative Individuals - Creative CanCreative Can   -  Slice - Track Your Stuff (Packages, Purchases, Price Drops)   -  How to Use Text Expansion to Save Yourself Hours of Typing Every Week   -  Clarity — On Demand Business Advice   -  Springpad: Everyday life, done better   -  Wunderlist: To-Do List & Tasks - Apps on Google Play   -  7 Free iPad Apps for Educators and Students - The Edublogger   -  10 Ways You Should Never Describe Yourself   -  Dé werkplek voor al je werk   -  What multitasking does to our brains - The Buffer Blog   -  Business Model Fiddle