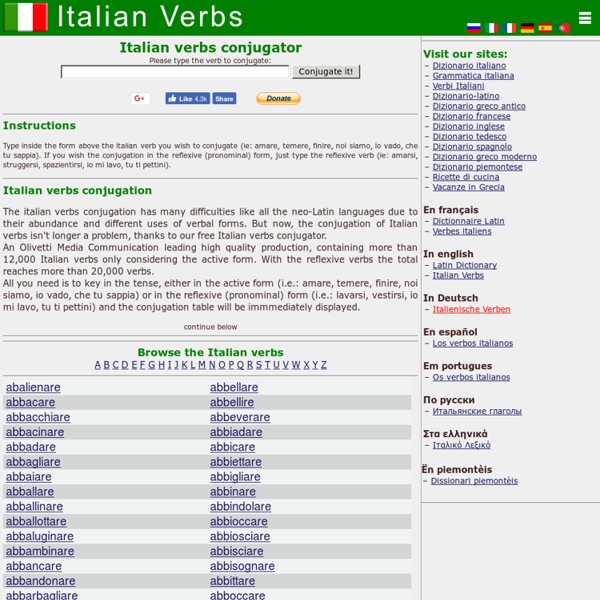 Italian I Tutorial: Basic Phrases, Vocabulary and Grammar If you're interested in buying books to supplement your Italian studies, I've recommended some books from Amazon. Also check out the Foreign Service Institute Italian FAST Course that I am converting to HTML. If you'd like to download the mp3s, use the DownThemAll add-on for Firefox to download all the mp3s at once instead of right-clicking on each link. Thanks to Corrado for the recordings! 1.

Italian crime looks into dark heart of society 27 December 2010Last updated at 09:06 By Francis Welch Producer, Italian Noir Andrea Camilleri says that crime fiction writers fill a void in society European crime fiction, particularly Scandinavian noir, is enjoying a huge boom with novels such as Stieg Larsson's The Millennium Trilogy and Henning Mankell's Wallander. But Italian noir is emerging as a force inspired by the dark side of Italian society. The Difficulties of Learning the Italian Language A look at how complicated and different Italian is for English speakers, and just what learning the language involves. A Few Basics This is not an Italian lesson, just a few interesting and convoluted facts about learning the language. In Italian, like other European languages, all objects have a gender, they are either masculine or feminine, and consequently all articles and adjectives used with these objects take on the same sex as the noun. The same applies for plurals – adjectives also become plural, so do articles, and this is hard for an English speaking person to learn.Adjectives usually follow the object, so a tall man becomes - a man, (who is) tall.1 in Italian is uno, but when used before a word beginning with any letter, except “z or s + consonant” it becomes “un”.In many cases the masculine word ends in “o” while the feminine word ends in “a” and the plural of “o” is “i” with the plural of “a” is “e”. Painting by Italian artist Lou Pizzi

Italian Language Blog: Language and Culture of the Italian-Speaking World Here in we have two lovely in our : , commonly called because it houses the council offices, and . Most of the time it’s difficult to appreciate the beauty of these piazze due to their unfortunate, and somewhat controversial use as car parks. Every and the ugly cars are evicted to make room for the local market, which is more attractive but still makes it difficult to enjoy these beautiful spaces without ‘clutter’. Yesterday, however, was perhaps the first time that I’d appreciated the use of Piazza del Comune as a car park.

Italian Grammar: Active & Passive Voices In passive sentences, the subject receives the action of the verb. In active sentences, the subject does the action. However, the meaning of both sentences is the same. The passive form is only possible with transitive verbs and is much more common in English than in Italian. The passive form consists of the verb essere plus the past participle of the main verb followed by da (by) and its contractions.

Fumetti A photonovel (sometimes spelled as fotonovel) is a type of book, adapting a film or television episode and using film stills instead of artwork along with the narrative text and word balloons containing dialogue.[1] The photonovel concept was most popular in the late 1970s and early 1980s, before the widespread advent of home recording devices such as VCRs, though some are still published. Several popular films and television programs were adapted to the format.[2] List of photonovels[edit] Film[edit] Television[edit]