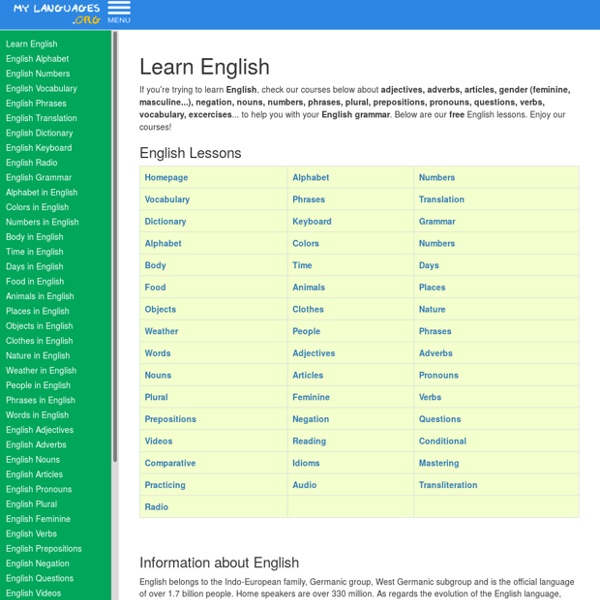 English Lessons Information about English English belongs to the Indo-European family, Germanic group, West Germanic subgroup and is the official language of over 1.7 billion people. Home speakers are over 330 million. As regards the evolution of the English language, three main phases can be distinguished. From the 6th and 5th centuries B.C., the Celtics are believed to have lived in the place where we now call Britain. The words "England" and "English", come from the word, "Angles". We hope the lessons above helped you learn English.

Word Skills Board Game Words Skills is a fun game that is easy to play and can be used to review word skills such as indicating the beginning sound of a word, the ending sound of a word, middle sound of a word, rhymes, synonyms, and antonyms. It can be used as a stand alone board game or as a supplement for reviewing the 7 core phonics units at Lanternfish ESL (or any other similar phonics program). Why Word Skills? Word skills are a valuable tool for students as they set out on the road to becoming independent learners. Being able to talk about words is an essential skill language learners will need as they interact with their teachers to figure out spelling, pronunciation, and meaning of new words they encounter. The words skills include identifying beginning sounds, middle sounds, ending sounds, rhyme, synonyms, antonyms and, if you use one of the advanced versions, spelling and past tense of words.

Vocabulary It is more fun to talk with someone who doesn't use long, difficult words but rather short, easy words like 'What about lunch?'Winnie-the-Pooh Welcome to EnglishClub Vocabulary! Restaurant English: Ordering Food Time: 1 hour Focus: The purpose of this lesson is to give false beginners the skills to order food in a restaurant. English Grammar Resource Guide English language grammar includes an ever-unfolding set of rules. As a subject of study, it’s more deep than broad: students in the early grades learn a basic overview of the parts of speech and sentence types, and as they advance in grade level, older concepts are broken into more complex systems. In that way, English grammar is like the branches of a tree, with new rules and concepts extending outward from previously learned principles. Source: