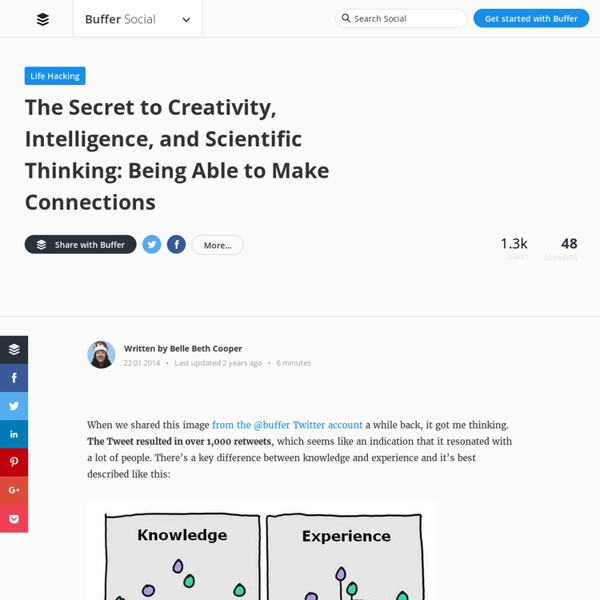 When we shared this image from the @buffer Twitter account a while back, it got me thinking. The Tweet resulted in over 1,000 retweets, which seems like an indication that it resonated with a lot of people. There’s a key difference between knowledge and experience and it’s best described like this: The original is from cartoonist Hugh MacLeod, who came up with such a brilliant way to express a concept that’s often not that easy to grasp. The image makes a clear point—that knowledge alone is not useful unless we can make connections between what we know. Whether you use the terms “knowledge” and “experience” to explain the difference or not, the concept itself is sound. Lots of great writers, artists and scientists have talked about the importance of collecting ideas and bits of knowledge from the world around us, and making connections between those dots to fuel creative thinking and new ideas. Intelligence and connections: why your brain needs to communicate well with itself 1. 2. 3. P.S.

Uncommon Genius: Stephen Jay Gould on Why Dot-Connecting Is the Key to Creativity “Originality often consists in linking up ideas whose connection was not previously suspected,” wrote W. I. B. Beveridge in the fantastic 1957 tome The Art of Scientific Investigation. “The role of the imagination is to create new meanings and to discover connections that, even if obvious, seem to escape detection,” legendary graphic designer Paul Rand seconded. Indeed, longer ago than I can remember, I intuited the conviction that creativity is a combinatorial force — it thrives on cross-pollinating existing ideas, often across divergent disciplines and sensibilities, and combining them into something new, into what we proudly call our “original” creations.

The Sound of Hate In December, 1989, the Panamanian dictator Manuel Noriega was expelled from power by American forces. To escape capture, he took refuge in the Papal Nunciatura in Panama City. When an American general arrived to confer with the papal nuncio, the U.S.

The Secret of Creativity with Deepak Chopra Description: Deepak Chopra explores the dynamics of a creative life and the relationship between age and creativity (we don’t have to lose our imagination as we grow older!).* How do you keep your creative spirit alive even as you progress further into adulthood? THE RABBIT HOLE features visually-stunning explorations of BIG questions: What is death? Who is God? Is life an illusion?

The Third Self: Mary Oliver on Time, Concentration, the Artist’s Task, and the Central Commitment of the Creative Life “In the wholeheartedness of concentration,” the poet Jane Hirshfield wrote in her beautiful inquiry into the effortless effort of creativity, “world and self begin to cohere. With that state comes an enlarging: of what may be known, what may be felt, what may be done.” But concentration is indeed a difficult art, art’s art, and its difficulty lies in the constant conciliation of the dissonance between self and world — a difficulty hardly singular to the particular conditions of our time. Two hundred years before social media, the great French artist Eugène Delacroix lamented the necessary torment of avoiding social distractions in creative work; a century and a half later, Agnes Martin admonished aspiring artists to exercise discernment in the interruptions they allow, or else corrupt the mental, emotional, and spiritual privacy where inspiration arises. Oliver writes:

TLSPower to the people? – TheTLS One of the most curious sub-plots on Referendum day was what quickly, and predictably, became known on social media as “pen-gate”. Groups of Brexit campaigners started to hand out pens in polling stations to replace the government-issued pencils with which voters are usually asked to make their cross. Their worry was that, somewhere along the electoral line, a pencil cross in the “Leave” box could easily be erased by those working on behalf of “the establishment”, and replaced with a vote for “Remain”. Police were apparently called to one polling station to investigate the potentially disruptive distribution of alternative voting instruments. There is a tiny glimpse here of the edgy anxieties of Western democracy. Modern historians have found in ostracism one of the most appealing inventions of fifth-century BC politics.

Science Reveals Artists Really Do Have Different Brains We might now have neurological proof that artists actually are different creatures from everyone else on the planet. According to a study published in Neurolmage, researchers believe that artists have brains that are structurally different from non-artists. It appears that there's now justifiable support for the idiom "she's just wired differently, idk." The study, titled "Drawing On The Right Side Of The Brain: A Voxel-Based Morphometry Analysis Of Observational Drawing," included 44 graduate and post-grad art students and non-art students who were asked to complete various drawing tasks. The completed tasks were measured and scored, and that data was compared to "regional grey and white matter volume in the cortical and subcortical structures" of the brain using a scanning method called voxel-based morphometry.

20 Things Only Highly Creative People Would Understand There’s no argument anymore. Neuroscience confirms that highly creative people think and act differently than the average person. Their brains are literally hardwired in a unique way. But that gift can often strain relationships. I’ve seen it firsthand while working with New York Times bestselling authors and Grammy-winning musicians.