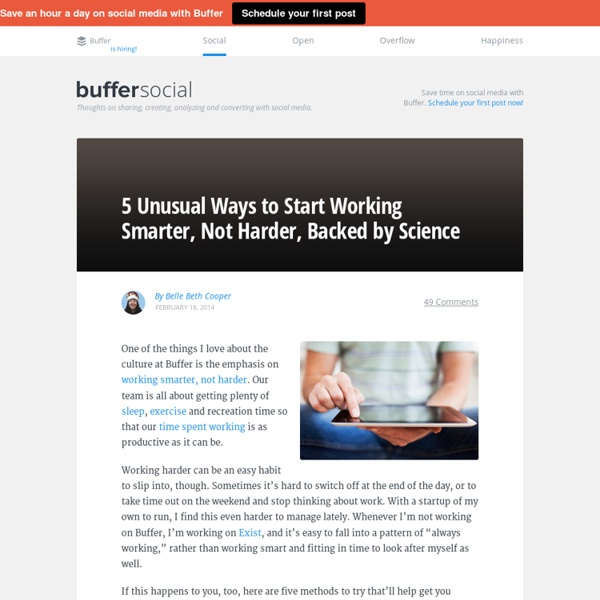 One of the things I love about the culture at Buffer is the emphasis on working smarter, not harder. Our team is all about getting plenty of sleep, exercise and recreation time so that our time spent working is as productive as it can be. Working harder can be an easy habit to slip into, though. Sometimes it’s hard to switch off at the end of the day, or to take time out on the weekend and stop thinking about work. With a startup of my own to run, I find this even harder to manage lately. Whenever I’m not working on Buffer, I’m working on Exist, and it’s easy to fall into a pattern of “always working,” rather than working smart and fitting in time to look after myself as well. If this happens to you, too, here are five methods to try that’ll help get you working smarter, not harder. 1. In one of my favorite books, Stephen Covey tells a story about a woodcutter whose saw gets more blunt as time passes and he continues cutting down trees. 2. So when should you be taking a nap? 3. 4. 5.

The Morning Routine Experts Recommend for Peak Productivity What’s the best way to start your day so that you really get things done? Laura Vanderkam studied the schedules of high-achievers. What did she find? Almost all have a morning routine. I’ve interviewed a ton of top experts about their productivity secrets: Tim Ferriss, Cal Newport, Dan Ariely, Charles Duhigg, and others. But you’re busy.

5 More Unexpected Ways to Work Smarter, Not Harder I wrote a post recently about ways that you can work smarter, not harder. As I worked through the list of techniques I’d collected, the post became so long that I had to split it in half. Here are even more suggestions to help you make your day more productive without putting in extra hours. 12 Ways To Still Be Productive When You Don't Feel Like Working There are some days when you don’t feel like working, but you still want to do something. You want to be productive. You want to get things done. You want to feel accomplished! The next time the “no-work bug” strikes, try these 12 ways of getting things done. Fixed vs. Growth: The Two Basic Mindsets That Shape Our Lives “If you imagine less, less will be what you undoubtedly deserve,” Debbie Millman counseled in one of the best commencement speeches ever given, urging: “Do what you love, and don’t stop until you get what you love. Work as hard as you can, imagine immensities…” Far from Pollyanna platitude, this advice actually reflects what modern psychology knows about how belief systems about our own abilities and potential fuel our behavior and predict our success. Much of that understanding stems from the work of Stanford psychologist Carol Dweck, synthesized in her remarkably insightful Mindset: The New Psychology of Success (public library) — an inquiry into the power of our beliefs, both conscious and unconscious, and how changing even the simplest of them can have profound impact on nearly every aspect of our lives. One of the most basic beliefs we carry about ourselves, Dweck found in her research, has to do with how we view and inhabit what we consider to be our personality.

How Keeping Things Simple Makes You A Productive Entrepreneur Running your own business is a complicated affair; making it successful can be even more complicated. If you don’t have a plan to be productive and keep focused, the details that you are responsible for can quickly overwhelm you. In fact, one of the biggest failings of new entrepreneurs is to get so caught up in an avalanche of unimportant details that more important priorities get left unattended on the table.

6 Tips to Be a Productive Procrastinator There are advantages to putting things off—really! Here’s how to "do it tomorrow" the right way. As a freelance writer who works from home, I spend a lot of time procrastinating (if I have ever met you, even in passing, I have Facebooked/Googled you, just FYI). But I spend even more time beating myself up about my procrastination. The Complete Guide to Productivity Like us on Facebook. We'll love you forever. Let’s face it. We all want more time in our lives.

10 Foolproof Tips for Overcoming Procrastination …and the very best tip is the easiest (hint: it’s the first one). Procrastination has been extensively studied by psychologists, probably because they have some world-class procrastinators close at hand: students. Students don’t have a monopoly on wasting time, though, almost everyone procrastinates now and then. The difference is that some people learn effective strategies for dealing with it and get some stuff done; others never do.

Benefits of Simplicity to Productivity Simplicity is often perceived as boring, unattractive and unremarkable. Majority of people want something striking and complicated. But as Leonardo da Vinci has said, The Secret to Productivity: Focus Technology has helped us do so much more, so much faster. But many experts argue that work-related systems and tools haven’t necessarily made us more productive. How many times does your phone, tablet or computer chime to indicate email or a Facebook notification? The reality is that while technology has the ability to improve productivity, too many people allow it to distract. Ultimately, the key to getting more done in less time requires focus. Ultimate Guide to Productivity Tools Welcome to Solo PR Pro’s Tool School series! Designed to fight overwhelm, all this month we’re offering specific recommendations for services that are cost-effective for indies, and aren’t enterprise-focused or overkill for our needs. First up, we look at Productivity Tools.

Stop Beating Yourself Up for Not Getting Everything Done Every Day One of the biggest challenges that we all face is the steadily increasing number of things that we have to do on a daily basis. There is nothing new about this but many people struggle with a sense of daily frustration simply because they can't get everything done and in all likelihood they never will. I get the feeling that this sense of frustration is becoming a little more desperate every day. I'm suggesting a simple process that can dramatically change how you feel. At the end of the day, when you look at your to do list, and start the afternoon "I'm not good enough" session, beating yourself up because you didn't get everything done, try making a new list. On this list, jot down a few bullet points for each of the following 5 questions?

10 requirements of the perfect manager If you could hire your next boss, what selection criteria would you use? Alan Norton shares a make-believe want ad aimed at finding the ideal manager. Haven't you wished at least once that you could hire your next boss? You might win the lottery, buy the company, and do just that. But chances are if that happened, you would be out the door in less time than it took to pick the numbers.