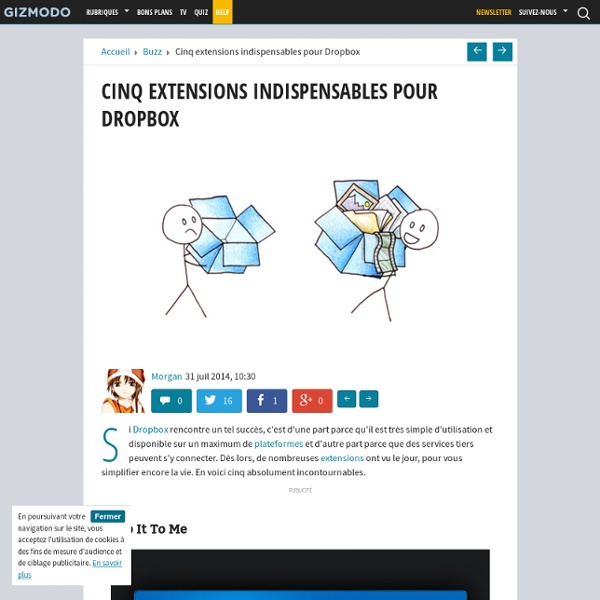 One Stop Resource for Google Docs If you’re a Google Docs user, curious about Google Docs, work with Google Docs with students, and especially if you’re looking for help understanding all of the features of Google Docs, then you’ve got to bookmark MaryFran’s Google Docs Tutorials. Created as a Google Site (of course), this is a huge collection of resources, tutorials, videos, … all devoted to helping the visitor understand the ins and outs of working with Google Docs. That’s really the best description I can think of to describe this site. Navigation and use is as simple and powerful as Google Docs itself. Just select a topic of interest from the left side navigation menu and read on. Screen captures are included along with complete descriptions of just what activity is being discussed.

10 Great Tools to Integrate with your Google Docs Since Google officially changed Google Docs name to Google Drive and a number of updates have been introduced to improve its overall performance. One very recent update is an increase of cloud storage capacity to 15GB usable across Gmail, Drive, and Google Plus. It is quite obvious that Google is trying to outsmart its immediate competitor Dropbox and I think Google is successful in its strategy so far. To make Google Drive stand out from the crowd, Google opened it to apps developers and allowed users to select from a wide variety of web apps to integrate into their Google Drive accounts. With the integration of these apps, users can now handle their files and documents ways not affordable by any other cloud storage tool out there. How I moved my websites to Dropbox and GitHub A few months ago I cancelled my hosting and server accounts and moved all my websites to the cloud. I tried it as an experiment; never for a second I thought it would work this well. I did the switch out of impulse: I was pissed. I was pissed at the hosting companies charging so much, having such crappy support, and much downtime. I’m very glad I switched. Why I switched

10+ Best Apps For Your Dropbox If you’ve been using Dropbox for a while, you may not have noticed that a whole ecosystem of applications have been built up to use the service. Over time, these apps have sprung up to fill all of the little holes Dropbox left unfilled. There are apps now for just about everything. It’s possible to sync Google Docs to Dropbox, automatically send Gmail attachments to Dropbox, play music in a browser from your Dropbox music files, encrypt your Dropbox, easily host a website or blog in Dropbox, collect URLs and web clippings to Dropbox and to automate file syncs between all of your social networks and Dropbox.

Top 10 Uses For Dropbox You May Not Have Thought Of For many advanced computer users, Dropbox is the premiere cloud-based storage and sharing document service. It has replaced the Documents folder on my Mac, and is the primary way I sync files between my devices. Similar and equally useful free services include Google Drive and Box.com. We’ve already covered some awesome uses for Dropbox, including How to Run Multiple Dropbox Accounts Simultaneously [Mac], how to send send files to your Dropbox without using Dropbox, how to upload files faster and easier with Dropbox, and even how to host a WordPress blog on your Dropbox account. The following are a handful of other ideas for new and maybe more experienced users of Dropbox.

JustCloud What does JustCloud do? JustCloud uses a small desktop application to backup all of your computers files to the cloud. Your files are constantly backed up and you can access them at anytime from any device in the world by logging in to the JustCloud online control panel. Cloud Explorer for SkyDrive Microsoft Office Mobile is the official Office companion optimized for your Android phone. You can access, view and edit your Microsoft Word, Microsoft Excel and Microsoft PowerPoint documents from virtually anywhere. Documents look like the originals, thanks to support for charts, animations, SmartArt graphics and shapes.

Compare SkyDrive, Google Drive and Dropbox We compare the features of Windows SkyDrive, Google Drive and Dropbox to help you pick the best file storage and sync service for your specific requirements. You have your files, photos and documents on your home computer that you would like to access from other locations on different devices. Dropbox has been the de-facto choice for long but that could potentially change as Microsoft and Google have just entered the arena with the launch of Windows Live SkyDrive and Google Drive respectively.