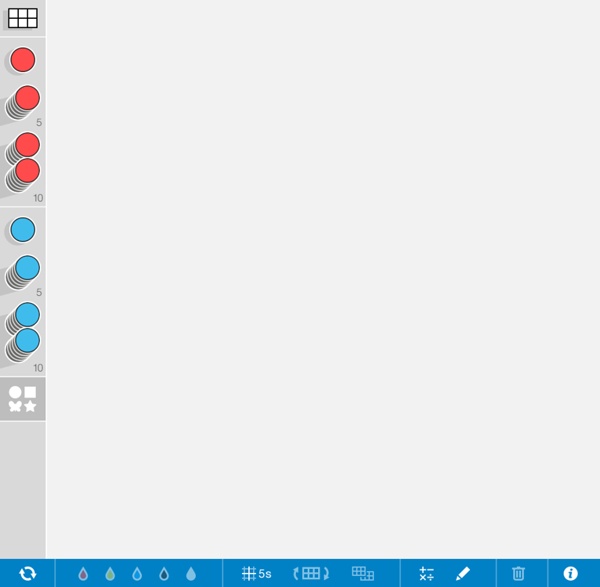 Overview Number Frames help students structure numbers to five, ten, twenty, and one hundred. Students use the frames to count, represent, compare, and compute with numbers in a particular range. The frames help students see quantities as equal groups of other quantities and in relation to benchmark quantities. This helps primary students move away from one-by-one counting toward more efficient ways of counting and computing. As students advance, custom frames can be constructed to help visualize factors, products, fractional parts and more. About Us This resource is brought to you by The Math Learning Center, a nonprofit organization dedicated to K-12 education since 1976. This app was crafted by Clarity Innovations. www.clarity-innovations.com © 2015 Math Learning Center | Number Frames version 1.1.2

The Elementary Math Maniac: A Fun Free Tool for Practicing Counting If you have ever been in a K-2 math class, you know how important counting is. I recently posted some of my favorite you tube videos for practicing counting, my favorite counting books, and have written a seven part series on estimating and counting routines that I use in my classroom. I have also written about interventions I use to help kids learn to count. Fun Kids Online Math Games "Sheppard offers everything from early math to pre-algebra. The lessons include interactive activities to practice concepts. Students can shoot fruit, pop balloons, and even play math man (the math version of pac man!). Webtools: No Registration Needed for Students Welcome to my list of webtools that don’t require student registration. This started off as a simple curation for myself and has ballooned into something that I never thought would get this big. And it is still growing. I started added comments to each link, but that is taking a long time to complete.

Gravitational waves – your questions answered The final piece of Einstein's general theory of relativity, which has stubbornly evaded detection since his predictions a century ago, has been detected. Scientists announced today at a press conference they’ve successfully picked up gravitational waves, formed during the cataclysmic collision and fusion of two mammoth black holes 1.3 billion light-years away. Not only does this confirm Einstein’s predictions, it gives astronomers a new method of “seeing” the Universe. Nailing down gravitational waves – ripples through the fabric of space-time – has not been an easy task. Even Einstein was pessimistic about finding the miniscule vibrations. Indeed, in 2014 the astrophysics world was elated with the announcement that the Background Imaging of Cosmic Extragalactic Polarisation (BICEP2) telescope at the South Pole had picked up faint echoes of the Big Bang, only to have those hopes dashed when the signal turned out to be dust in our own galaxy.

base ten math cards audrey Math Ten Pins - Couldn't link to directives for this activity but there are some great ORGANIZATION ideas on this site! LOVE THE BASE TEN BLOCKS IN A DIVIDED LUNCH CONTAINER!! Neatly organized The eClock - Learn all about time - Interactive Clock Digital On/Off Words On/Off Roman/Arabic To rotate the hands on the interactive e-Clock, move the cursor over the clock face, press the left mouse button down and move the mouse. Rotate the mouse clockwise around the centere of the e-Clock to move the time forward and move the mouse in an anticlockwise direction around the center of the eClock. to move time backwards. Notes

Math Tests and Quizzes That Are Aligned Core Math Curriculum Math Tests and Topic/Skill Based Quizzes We now have a full line of tests for each section of the common core curriculum. Test are fully available to members for immediate download. There is a test sampler in each section for those who haven't signed up yet and want to see what it is all about. We will continue to add new tests on a monthly basis. Tests By Grade Level Number Rack by The Math Learning Center Overview Number Rack facilitates the natural development of children's number sense. The movable, colored beads encourage learners to think in groups of fives and tens, helping them to explore and discover a variety of addition and subtraction strategies. About Us

What Does E=mc2 Truly Mean? What does E=mc2, the most famous equation in history, mean? (Image Credit: PBS Space Time) Albert Einstein remains one of the greatest minds in history. His contributions to the fields of cosmology, physics and mathematics are unquantifiable, but arguably, the most important works were his theories of general and special relativity. Ultimately, they shed light on the intimate workings of the universe—from the nature gravity itself, to the outermost edges of black holes. Debbie Diller I wish I knew the best way to explain my Math Stations. I've said it many times, I like it simple, clear and meaningful. So ... in a nutshell... here is how I run my math stations in my 2nd grade class. Each month I cover 12 CC standards. 4 from each domain:

Interactive Fraction Wall explore Fractions Percentages and Decimals Fraction walls are a great way to teach about fractions and in particular equivalent fractions. In a fraction wall each row or layer of the wall represents one whole number. The layers are divided into a number of bricks and hence each brick represents a fraction whose denominator is equal to the number of bricks in that layer. Each brick can be turned on or off by clicking it. This wall also allows the display of decimal and percentage values. To the right of the wall are boxes which can be hidden, the value of each box is fraction of the wall that has been turned on. 14 Virtual Tools: Favorite Math Apps More and more classrooms are gaining access to technology that can be used with students. Whether you’re modeling a lesson, creating stations, or working in a one-to-one classroom, virtual tools can promote student engagement while increasing academic success. Here are some apps for iPads — along with a few other tips — that can transform your daily lessons and are definitely worth checking out! Base Ten Blocks