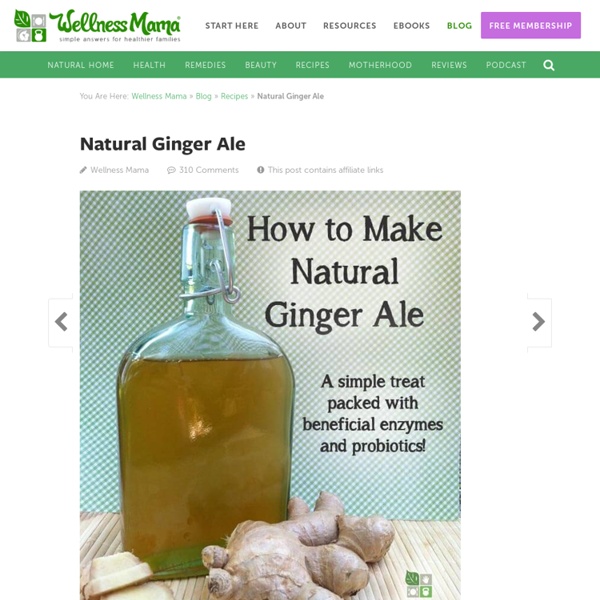 Serene and Pearl's All Day Sippers - An ongoing list! - FP I don't know how Serene and Pearl keep coming up with these great all day sippers. I love trying them, but I can't keep track of all the recipes! I am going to collect the sipper recipes here and keep adding the new ones as they come out. I'm going to try to always put the newest one on top so you don't have to scroll to the bottom of the post to see if there are anymore new ones. Apple Pie Sip Place 4 chamomile tea bags in 8-12 oz. of boiling water.

Honey as an antibiotic: Scientists identify a secret ingredient in honey that kills bacteria Sweet news for those looking for new antibiotics: A new research published in the July 2010 print edition of the FASEB Journal explains for the first time how honey kills bacteria. Specifically, the research shows that bees make a protein that they add to the honey, called defensin-1, which could one day be used to treat burns and skin infections and to develop new drugs that could combat antibiotic-resistant infections. "We have completely elucidated the molecular basis of the antibacterial activity of a single medical-grade honey, which contributes to the applicability of honey in medicine," said Sebastian A.J. Zaat, Ph.D., a researcher involved in the work from the Department of Medical Microbiology at the Academic Medical Center in Amsterdam. "Honey or isolated honey-derived components might be of great value for prevention and treatment of infections caused by antibiotic-resistant bacteria."

Top 10 non-alcoholic drinks While some of you choose to decline alcohol all year round, the notion of giving up the sauce for a stint is ever popular. “Dry January” has truly manacled itself to our national psyche, with over 170,000 people participating in the ‘dryathlon’ in 2014, according to the scheme’s website. It seems the lure of saving money, trimming the waist and skipping hangovers is a potent one. Ginger Beer Recipe - Earth Energy Healings There are all kinds of ways that herbs can be enjoyed. Some more traditional, as in a tea or as food. As medicine or beverage. Ginger beer is a deliciously easy beverage to make and it is absolutely amazing. You can easily feel the effect ginger has on you when you are drinking a cold glass filled with bubbly ginger beer and ice cubes. In short, the general outline for making ginger beer is as follows:

Basic Coconut Flour Baking Mix + 15 flavors of Breakfast Bread EDITED 3/17/2014 I have been able to add a few almonds back into my diet, and tried almond flour in place of the flax seed meal. It is VERY yummy, too, and works great. I put it in the recipe amount. =) I should call this “Good Morning Mix”…I like simple….I like easy. My life, family, work and schedule are busy…not my breakfast. My first meal of the day must be able to be prepped with 1/2 an eye open and only one cup of coffee consumed….this requires simple. Lemon Lavender Mocktail » The Merrythought Today we’re sharing our final floral mocktail for this month! Lavender is finally starting to pop up around here so it’s the right time to go snag a bundle and make yourself one of these lemon lavender mocktails. These are perfect for a get-together with your favorite ladies! Lady Lavender Mocktail

homemade coconut butter - Ashley Neese It’s recipe time! Just as we were settling into cooler weather we’re back in hopefully our final heatwave this year. I’ve been working on new fall recipes but it’s just too hot to turn on the oven today so I’m sharing a superfood staple in my pantry – homemade coconut butter. If you already buy this from the store you’re going to love how easy it is to create at home. If this coconut butter stuff is new to you, welcome, it’s AMAZING! Coconut butter is the blended fleshy part of the coconut.

"Spanish rice" quinoa - Simply Healthy Home Tacos are a favorite in our home. We probably have some variation of them at least once a week. I love it because while it isn’t extra work, everyone can enjoy them they way they like, picking their own toppings. My kids love “spanish rice” so I decided to try “spanish rice” quinoa to see how it would go over and it was a success! This recipe works well on the Trim Healthy Mama plan and is an E meal.

Mold Mold growth covering a decaying peach. The frames were taken approximately 12 hours apart over a period of six days. Spinellus fusiger growing on fungi Moldy tomatoes A mold (US) or mould (UK / NZ / AU / CA) is a fungus that grows in the form of multicellular filaments called hyphae.[1][2] In contrast, fungi that can adopt a single celled growth habit are called yeasts. Angelina’s Easy Bread Kvas Recipe You’re gonna appreciate this; a simple, authentic kvas that doesn’t need a concentrate! My hubby’s cousin, Angelina, shared this recipe with us. We’ve made it with rye bread and with black bread and both were so refreshing! New favorite for sure – thanks Angelina! This kvass lasts up to a week in the fridge (probably longer, but it might start tasting kinda strong). You’ll notice it loses sweetness daily as it stands.

Tuna Casserole - Mrs. Criddles Kitchen Another HIT in our home last night! Growing up my mom would make a Hamburger Helper boxed meal called Tune Tetrazzini. As crazy as it sounds it was delish and we LOVED it! HAha! I have never tried making my own tuna casserole but for some reason the memory of that boxed dinner sounded good. Also, I wanted to make it easy, just something to throw into a crockpot.

Turgor pressure Turgor pressure pushes the plasma membrane against the cell wall of plant, bacteria, and fungi cells as well as those protist cells which have cell walls. This pressure, turgidity, is caused by the osmotic flow of water from area of low solute concentration outside of the cell into the cell's vacuole, which has a higher solute concentration. Healthy plant cells are turgid and plants rely on turgidity to maintain rigidity. In contrast, this phenomenon is not observed in animal cells which have no cell walls to prevent them from being burst by the flow of water into the cell and must either continually pump out water or live in an isotonic solution where there is no osmotic pressure. Mechanism[edit] A physical phenomenon known as osmosis causes water to flow from an area of low solute concentration to an area of high solute concentration until the two areas have an equal ratio of solute to water.

Pulled pork with ginger-bourbon sauce recipe We've sent an email with instructions to create a new password. Your existing password has not been changed. We'll send you a link to create a new password. Foods That Balance Hormones Your hormones are your body's control system. But in an age when hormone-disrupting chemicals lurk in processed foods, shampoos, and even scented candles and air fresheners, it doesn't take much to throw off that delicate balance. And out-of-whack hormones could affect almost every facet of your health, making it really hard to lose weight, have babies, and even feel happy. Unhealthy hormone levels can even increase your risk of certain cancers and other chronic diseases.