4 Things You Thought Were True About Time Management - Amy Gallo 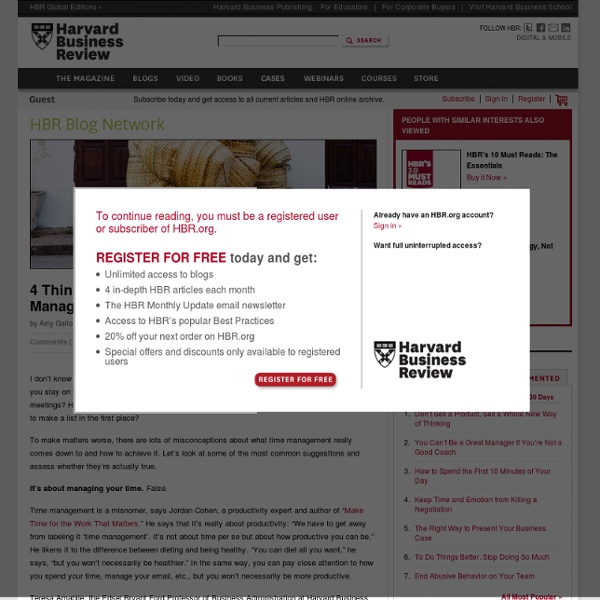 by Amy Gallo | 1:00 PM July 22, 2014 I don’t know anyone who doesn’t struggle with how to make the most of their time at work. How do you stay on top of an overflowing inbox? How do you get work done when your day is taken up by meetings? How can you get through a continually expanding to-do list? How do you even find time to make a list in the first place? To make matters worse, there are lots of misconceptions about what time management really comes down to and how to achieve it. It’s about managing your time. Time management is a misnomer, says Jordan Cohen, a productivity expert and author of “Make Time for the Work That Matters.” Teresa Amabile, the Edsel Bryant Ford Professor of Business Administration at Harvard Business School and coauthor of The Progress Principle, whose expertise in this area comes from reading the work diaries of thousands of workers who documented their struggles to get work done, says it’s more about managing your overall workload. This may be partly true.

How To Motivate Yourself: 3 Steps Backed By Science You make goals… but then you procrastinate. You write a to-do list… but then you don’t follow through. And this happens again and again and again. Seriously, what’s the problem? Leadership Style Survey This questionnaire contains statements about leadership style beliefs. Next to each statement, circle the number that represents how strongly you feel about the statement by using the following scoring system: Almost Always True — 5 Frequently True — 4 Occasionally True — 3 Seldom True — 2 Almost Never True — 1 How To ‘Wire’ Self-Love Into Your Brain by David R. Hamilton Ph.D. I think of self-love as an inner sense of your own worthiness and value. Despite the fact that we often think of it as such a difficult thing to learn, you really can wire self-love into your brain. It’s based on the fact that your feelings are usually written all over your face. Here’s how. You can instantly recognise a happy person by the genuine smile on their face.

Here's How to Get it Out of Your System Experts have been warning for years against the dangers of sodium fluoride, but recently more awareness has spread than ever before. Following the rampant success of essential news stories centered around fluoride, including a story I authored just three short days ago highlighting the horrendous amount of sodium fluoride in doctor recommended toothpaste (500,000% higher than fluoridated water), it’s now important to discuss how to actually get it out of your system through fluoride detox. Even if you somehow managed to escape the ingestion of fluoridated water in your younger years, chances are you’ve been exposed to food items that actually can contain about 180 times the sodium fluoride content as fluoridated water according to fluoride expert Jeff Green.

Employee Effectiveness - The Clemmer Group Webinar: 9 Ways to Build Effective Relationships “No man is an island, entire of itself; every man is a piece of the continent, a part of the main.” These are a few lines of a poem penned by the metaphysical English poet, John Donne, around the time of Shakespeare. Community, interdependence, and oneness has been a central part of many ancient philosophies […]

Éiriú Eolas Early anatomical drawing of the vagus nerve. When was the last time that you had to perform gracefully in a high-pressure situation? How did you handle it? Did you choke or did you have grace under pressure? Researchers continue to confirm that daily habits of mindset and behavior can create a positive snowball effect through a feedback loop linked to stimulating your vagus nerve. In this entry I will show you 7 habits that will stimulate healthy ‘vagal tone’ and allow you to harness the power of your vagus nerve to help you stay calm, cool, and collected in any storm.

The Spice That Prevents Fluoride From Destroying Your Brain Sayer Ji | Activistpost | April 8th 2014 Fluoride is found everywhere today, from antibiotics to drinking water, no-stick pans to toothpaste, making exposure inevitable. All the more reason why new research proving this common spice can prevent fluoride damage is so promising! Fluoride’s neurotoxicity has been the subject of academic debate for decades, and now a matter of increasingly impassioned controversy among the general public, as well.

Kotter's 8-Step Change Model - Change Management Tools from Mind Tools "Change is the only constant."– Heraclitus, Greek philosopher What was true more than 2,000 years ago is just as true today. We live in a world where "business as usual" is change. How to Stimulate Your Vagus Nerve to Relieve Migraines Fast! The vagus nerve is the tenth cranial nerve. It leaves the brain at the brainstem and travels down the neck to affect the heart and digestive systems. It influences all sorts of things including heart rate, peristalsis (moving food through the intestines), speech and sweating, just to name a few. It’s even responsible for the gag reflex. Main Function of the Vagus Nerve The vagus nerve is involved in many processes, but they are all part of the parasympathetic branch of the autonomic nervous system.

Cilantro and Chlorella can Remove 80% of Heavy Metals from the Body within 42 Days Christina Sarich | Naturalsociety | July 7th 2014 There are many heavy metals that people are exposed to regularly without realizing it. Mercury, cadmium, and aluminum, among others, are able to imbed themselves into our central nervous systems and bones, bio-accumulating for years until we start to suffer acute health problems from heavy metal poisoning. Fortunately, there is a simple one-two-combination that helps to chelate heavy metals so that they are no longer circulating in the body cilantro and chlorella. Chelating agents are those that bind to heavy metal toxin ions, and then are removed from the body through our regular excretory channels.

PDCA PDCA (plan–do–check–act or plan–do–check–adjust) is an iterative four-step management method used in business for the control and continuous improvement of processes and products. It is also known as the Deming circle/cycle/wheel, Shewhart cycle, control circle/cycle, or plan–do–study–act (PDSA). Another version of this PDCA cycle is OPDCA. The added "O" stands for observation or as some versions say "Grasp the current condition."

About - Welcome to Workplace Resilience After graduating from Ohio State University with a B.A. in Organizational Communications, Shari spent 10 years working in Business Operations with progressive responsibility. She was an integral part of the company’s growth from 2 to 50 store operations. In the Educational and Social Services field, she redesigned numerous systems to run more efficiently and effectively. She strategically developed a Social Service program that grew from 3 to 30 employees and changed the 30-year-old protocol for serving emotionally disturbed children in the County. After receiving a Masters in Social Work, she worked as a Mental Health Therapist, serving a variety of clients seeking life changes. She began coaching, consulting and speaking extensively in 2011.