How to Build a New Habit: This is Your Strategy Guide 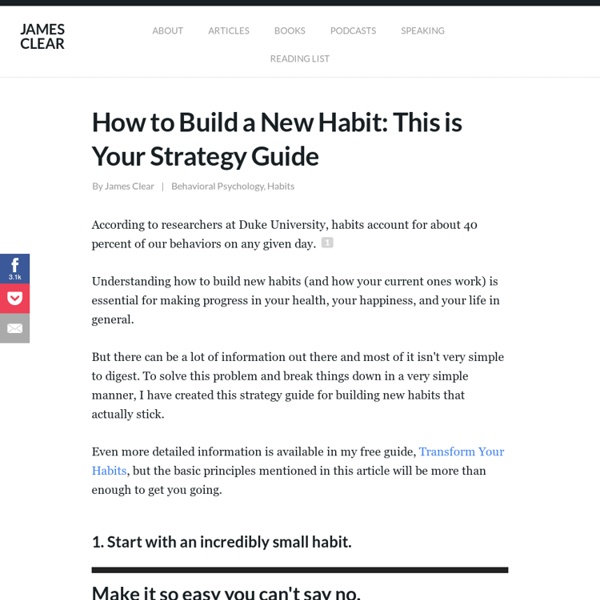 According to researchers at Duke University, habits account for about 40 percent of our behaviors on any given day. [1] Understanding how to build new habits (and how your current ones work) is essential for making progress in your health, your happiness, and your life in general. But there can be a lot of information out there and most of it isn’t very simple to digest. To solve this problem and break things down in a very simple manner, I have created this strategy guide for building new habits that actually stick. Even more detailed information is available in my Habits Workshop and in my free guide, Transform Your Habits. But the basic principles mentioned in this article will be more than enough to get you going. 1. Make it so easy you can’t say no. When most people struggle to stick with a new habit, they say something like, “I just need more motivation.” This is the wrong approach. Further reading: Identity-Based Habits: How to Actually Stick to Your Goals 2. 3. 4. 5.

How Habits Shape Your Health, Happiness, and Wealth In 1936, a man named Kurt Lewin wrote a simple equation that changed the way we think about habits and human behavior. The equation makes the following statement: Behavior is a function of the Person in their Environment. [1] Known today as Lewin’s Equation, this tiny expression contains most of what you need to know about building good habits, breaking bad ones, and making progress in your life. Let’s talk about what we can learn from it and how to apply these ideas to master the habits that shape your health, happiness, and wealth. What Drives Our Behavior? Before Lewin’s Equation became famous, most experts believed that a person’s habits and actions were a result of the type of person they were, not the environment they were in at the time.

5 Common Mistakes That Cause New Habits to Fail (and What to Do About Them) Welcome to 2015. It’s New Year’s Resolution time. Depending on where you get your numbers, somewhere between 81 percent and 92 percent of New Years Resolutions fail. [1] Translation: At least 8 times out of 10, you are more likely to fall back into your old habits and patterns than you are to stick with a new behavior. Behavior change is hard. No doubt about it.

Identity-Based Habits: How to Actually Stick to Your Goals This Year Change is hard. You’ve probably noticed that. We all want to become better people — stronger and healthier, more creative and more skilled, a better friend or family member. But even if we get really inspired and start doing things better, it’s tough to actually stick to new behaviors. It’s more likely that this time next year you’ll be doing the same thing than performing a new habit with ease. How To Trick Your Brain To Hold On To Positive Habit Changes We truly are creatures of habit. Nearly half of our everyday behaviors tend to be repeated in the same location almost every day, according to research out of Duke University. That means most of the time we are running on autopilot. This is a good thing. "Without habits, people would be doomed to plan, consciously guide, and monitor every action, from making that first cup of coffee in the morning to sequencing the finger movements in a Chopin piano concerto," the researchers David Neal, Wendy Wood, and Jeffrey Quinn write.

Why Do We Fail to Break Bad Habits? (Backed by Science) Source: PicJumbo. We all want to improve our health, our wellness and our happiness. And in order to achieve our goals, we need to break bad habits and form good ones that actually stick. But despite our good intensions, we often fail to act on them and even if we do, it’s ephemeral. There’s no doubt about it: change is hard. And no matter how hard we try to change, the comforts of eating sugary snacks, shopping and online surfing and difficult to resist.

Content Guide (Start Here) Welcome to Deep Existence. Let me show you around! Mini Habits: Smaller Habits, Bigger Results As the best and most important piece of content I have ever written, I must mention my book, Mini Habits. It and the Mini Habit Mastery Video Course are the only for-sale items right now associated with my work, and they support me. A quick look at the reviews (which I promise are 100% genuine except for this one) shows you the impact this book has on the lives of people who read it!

5 Secrets to Better Life Habits There’s an oft-quoted rule of thumb that says it takes 21 days to change a habit. Meanwhile, it’s day 23, and you still can’t forgo your morning croissant in lieu of packing the cheaper (and healthier) granola bar from home. Seems easy enough to do—and yet, your autopilot has you entering the bakery every morning, like clockwork. Does that make you feel down? Well, it shouldn’t. Here’s Why Believing People Can Change Is So Important in Life How a growth mindset affects stress levels and health. Adolescents who believe people can change cope better with the challenges of attending high school, a new study finds. In contrast, those who believed that people’s personalities are fixed and unchangeable fared worse, suffering higher levels of stress and poorer physical health.

Why Successful Habits Are About Structure, Not Effort As the founder and CEO of Lift, a popular set-goals-and-do-them-every-day app, Tony Stubblebine is immersed in the hows and how nots of what makes for productive habits. In a recent talk with us, he shared his own secrets of productivity, like the necessity of rituals, why he found an office right next to a gym, and why putting your running shoes on is better than setting a goal of running 20 miles. An edited version of the interview is below. Start with a small goal The number one driver of whether a habit change is a success or not that we see is how big is the initial goal is. Because everyone, if they're consistent, will eventually achieve something massive.

How to Change Your Beliefs and Stick to Your Goals for Good In one of my very first articles, I discussed a concept called identity-based habits. The basic idea is that the beliefs you have about yourself can drive your long-term behavior. Maybe you can trick yourself into going to the gym or eating healthy once or twice, but if you don’t shift your underlying identity, then it’s hard to stick with long-term changes. How to Believe in Yourself By Leo Babauta There was a long time when the lack of belief in myself was a major factor in my life. I didn’t pursue an ideal career, or start my own business, because I didn’t think I could. I didn’t stick to habits because I didn’t really believe I had the discipline. I was shy with girls, I had a hard time making new friends, I didn’t assert myself in the workplace.

How Simple Mini Habits Can Change Your Life “The only way to make sense out of change is to plunge into it, move with it, and join the dance.” ~Alan Watts It was late 2012, just after Christmas, and like many others I was reflecting on the year. I realized that I had ample room for improvement in too many areas of my life, but knowing that New Year’s Resolutions have a poor 8% success rate (University of Scranton research), I wanted to explore some other options. I knew I wanted to start before January 1st too, because arbitrary start dates don’t sit well with me. On December 28th, I decided that I wanted to get in great shape.

How to Stay Focused When You Get Bored Working Toward Your Goals We all have goals and dreams, but it can be difficult to stick with them. Each week, I hear from people who say things like, “I start with good intentions, but I can’t seem to maintain my consistency for a long period of time.” Or, they will say, “I struggle with mental endurance.

The Miracle of the Self-Compassion Habit By Leo Babauta Let’s hypothesize that there’s a substance that’s been irritating you and causing problems in all areas of your life: it causes you to be unhappy, to be stressed, to procrastinate, to be distracted, to be angry with people, to be dissatisfied with your life, to be overweight and unhealthy, to not exercise or eat healthy, and much more. Horrible substance, right? Now imagine there were a salve that could ease the bad effects of this substance, and make all those other areas better. The substance is real: it’s your suffering.