20 History Questions They Refuse To Answer In School 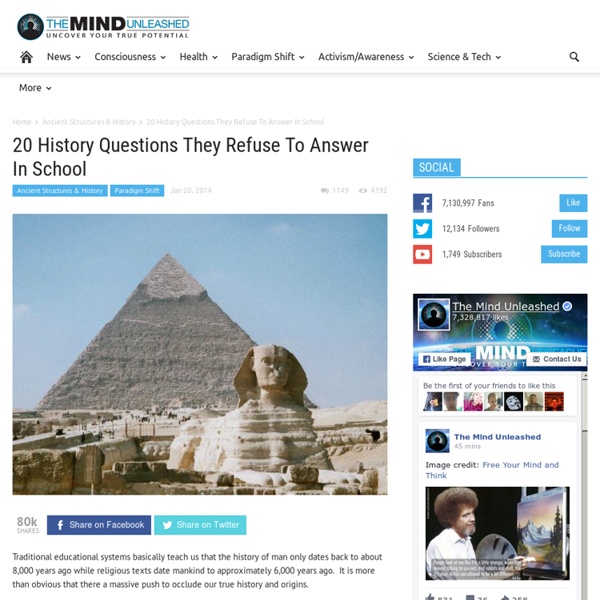 Traditional educational systems basically teach us that the history of man only dates back to about 8,000 years ago while religious texts date mankind to approximately 6,000 years ago. It is more than obvious that there a massive push to occlude our true history and origins. While you may not agree with some of the questions, please try to view them with an open mind. As you’ll see, the history we have been taught has been manipulated and obscured from us. Ask yourself (or others) the following questions and feel free to comment at the end of the article! A map drawn on a gazelle skin of an unfrozen Antarctica was found in 1929. 1. The last time Antarctica was not frozen was at least 4,000 BC, so… 2. A tiny figurine made of baked-clay (right) was brought up in amongst the debris churned out by a huge drill bit during the drilling of a well in Nampa Idaho in 1889. 3. 4. According to Darwinism, man evolved from ape. 5. 6. In Ecuador, one large Jade cup and 12 smaller Jade cups were found. 7.

10 Life Hacks to Help You Cut Plastic Out of the Picture By Kate Good / onegreenplanet.org Plastic is so ubiquitous that it can be found in or associated with nearly every tangible item in existence. Just think about how many different things you used today that either were plasticor came packaged in plastic, you’re guaranteed to come up with at least five. It’s no secret that we all have a rather sordid relationship with plastic: it’s incredibly convenient, but it’s equally wasteful.

A Colossal Dilemma Within Science & Religion Christina Sarich, In5D GuestWaking Times “The Destiny of Man is to unite, not to divide. If you keep on dividing you end up as a collection of monkeys throwing nuts at each other out of separate trees.” ~ T.H. White Let me assure you – I do believe in God. I believe in the Divine, with a big ‘D.’ Genesis creation narrative The Genesis creation narrative is the creation myth of both Judaism and Christianity. It is made up of two parts, roughly equivalent to the first two chapters of the Book of Genesis. In the first part, Genesis 1:1 through Genesis 2:3, Elohim, the generic Hebrew word for God, creates the world in six days, then rests on, blesses and sanctifies the seventh day.

Plants Have Memories: The Spiritual Case Against Agricultural Manipulation The Lakota of North America have many stories about seeds and how to know when each plant is in its sacredness. One seed flowers during a spiritual window called the Timpsila Ttkahca Wi, or when the Moon of Timpsila (turnip) is ripe. If you were to prematurely dig for the plant, it will not grow into a full nutrient. If you're too late in collecting the flower top, it breaks aboveground, and fierce winds blow the top away, leaving no trace where the underground root is located. During the short spring-summer months the Timpsila flower is in its calling — to let one know the time for collecting and abundance.

How to Memorize Things Quickly People like to joke that the only thing you really “learn” in school is how to memorize. As it turns out, that’s not even the case for most of us. If you go around the room and ask a handful of people how to memorize things quickly, most of them will probably tell you repetition. That is so far from the truth, it’s running for office. If you want to memorize something quickly and thoroughly, repetition won’t cut it; however, recalling something will. Fibonacci Leonardo Bonacci (c. 1170 – c. 1250)[2]—known as Fibonacci (Italian: [fiboˈnattʃi]), and also Leonardo of Pisa, Leonardo Pisano, Leonardo Pisano Bigollo, Leonardo Fibonacci—was an Italian mathematician, considered as "the most talented Western mathematician of the Middle Ages.".[3][4] Fibonacci introduced to Europe the Hindu–Arabic numeral system primarily through his composition in 1202 of Liber Abaci (Book of Calculation).[5] He also introduced to Europe the sequence of Fibonacci numbers (discovered earlier in India but not previously known in Europe), which he used as an example in Liber Abaci.[6] Life[edit] Fibonacci was born around 1170 to Guglielmo Bonacci, a wealthy Italian merchant and, by some accounts, the consul for Pisa.

7 ways for Modern Society to Reconnect with Nature I got a question recently which I spent a while pondering, and now am striving to try and put into words this idea that i’m having about the way that modern society and nature interact with each other. The question went something like – “If the Flower of Life is everything, then is stuff like traffic jams and office cubicles a representation of the Flower of Life too?” So far, the short answer that I have for that is “Yes and No”. terribleminds 1. A Series Of Word Choices Here’s why this matters: because both writing and storytelling comprise, at the most basic level, a series of word choices.

The 20 Things You Need To Let Go To Be Happy Everyone has one common goal in life: to achieve true happiness. The biggest factor holding us back from achieving our dreams is, simply and sadly, our own selves. We put limitations on ourselves everyday, whether intentionally or unintentionally. There are so many ways we can alleviate these restraints. Remember, life can either be something you embrace or something you hide from. Stop making things complicated and just live your life. Hermann Hesse on What Trees Teach Us About Belonging and Life “When we have learned how to listen to trees, then the brevity and the quickness and the childlike hastiness of our thoughts achieve an incomparable joy.” I woke up this morning to discover a tiny birch tree rising amidst my city quasi-garden, having overcome unthinkable odds to float its seed over heaps of concrete and glass, and begin a life in a meager oasis of soil. And I thought, my god*, what a miracle. What magic. What a reminder that life does not await permission to be lived. For me, trees have always been the most penetrating preachers.

An Illustrated History of Sherlock Holmes All illustrations © Nathan Gelgud Editor's Note: The release of "Mr. Holmes" starring Ian McKellen left us thinking here at Word & Film about all of the various incarnations of Sherlock Holmes. Ketamine and near death experience Back to NDE Page Does Ketamine Produce NDEs? Discussion of this topic can occur in the newsgroup alt.consciousness.near-death-exp Vandana Shiva: Everything I Need to Know I Learned in the Forest Today, at a time of multiple crises, we need to move away from thinking of nature as dead matter to valuing her biodiversity, clean water, and seeds. For this, nature herself is the best teacher. My ecological journey started in the forests of the Himalaya. My father was a forest conservator, and my mother became a farmer after fleeing the tragic partition of India and Pakistan. It is from the Himalayan forests and ecosystems that I learned most of what I know about ecology. The songs and poems our mother composed for us were about trees, forests, and India’s forest civilizations.