Find the Right Words - Words To Use 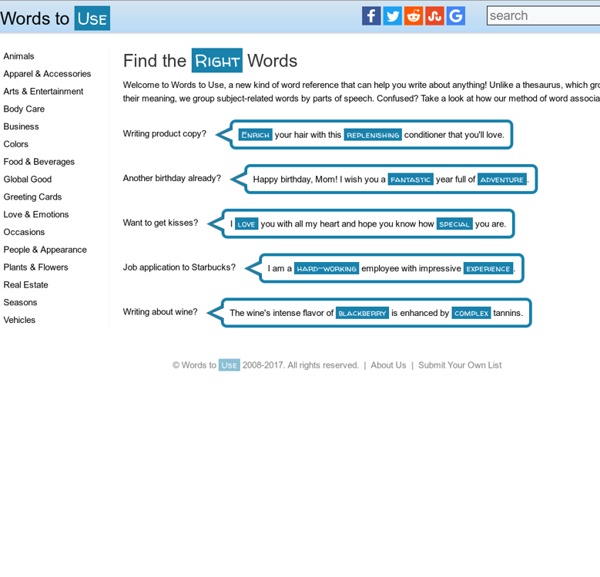 US State Department Creates Illustrations Depicting Differences Between British And American English People in America and the UK both speak English, and while most words remain the same there are a few differences that could potentially create a misunderstanding. To help English speakers from all over the world better communicate, the US State Department created these useful illustrations that highlight key differences between British and American English. English originated as early as the mid-5th century, and has since been brought to a number of countries. How to Write a Fanfiction: 12 Steps Edit Article Four Parts:Exploring the Source MaterialPlanning Your Own StoryWriting Your MasterpieceGetting Your Work Out ThereQuestions and Answers Fanfiction refers to a type of fiction using the settings or characters of an existing work in tribute to it.

Vocabulary Exercises Teaching Matters WebEnglish.se has compiled a list of 20 vocabulary exercises to practise or rehearse new words without bilingual translations. The aim is to provide the teacher with a variation of vocabulary practices and to reduce the use of translations in class. WebEnglish.se complies with the research that promotes learning new vocabulary in context and through various activities, diminishing the use of the students’ first language. Word by word translations can misinform the students of the word’s usage, variations in meaning and connotations.

How to Learn English Words Learn English words quickly and easily with these tips and resources. We all know we must learn English words—and lots of them—to speak the language well. A native English speaker knows approximately 12,000 to 20,000 words according to experts. 21 Actual Analogies Used By High School Students in English Essays. 1. When she tried to sing, it sounded like a walrus giving birth to farm equipment. 2. 45 ways to avoid using the word 'very' Writers Write is your one-stop resource for writers. Use these 45 ways to avoid using the word ‘very’ to improve your writing. Good writers avoid peppering their writing with qualifiers like ‘very’ and ‘really’. They are known as padding or filler words and generally add little to your writing. According to Collins Dictionary: ‘Padding is unnecessary words or information used to make a piece of writing or a speech longer.