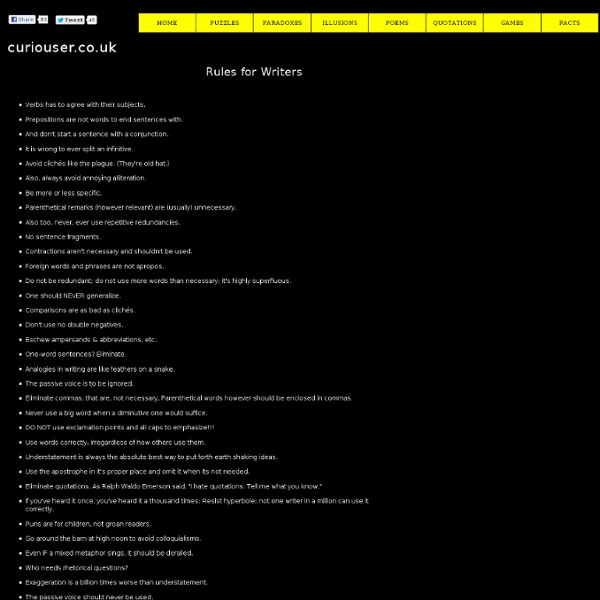 The Ren'Py Visual Novel Engine Ink - Quotes about writing by writers presented by The Fontayne Group Writing "I put a piece of paper under my pillow, and when I could not sleep I wrote in the dark." Henry David Thoreau "Writing is an adventure." Winston Churchill "Know something, sugar? "Whether or not you write well, write bravely." "The first rule, indeed by itself virtually a sufficient condition for good style, is to have something to say." My Writing Spot

Bouba/kiki effect This picture is used as a test to demonstrate that people may not attach sounds to shapes arbitrarily: American college undergraduates and Tamil speakers in India called the shape on the left "kiki" and the one on the right "bouba". The bouba/kiki effect is a non-arbitrary mapping between speech sounds and the visual shape of objects. This effect was first observed by German-American psychologist Wolfgang Köhler in 1929.[1] In psychological experiments, first conducted on the island of Tenerife (in which the primary language is Spanish), Köhler showed forms similar to those shown at the right and asked participants which shape was called "takete" and which was called "baluba" ("maluma" in the 1947 version). In 2001, Vilayanur S. More recently research indicated that the effect may be a case of ideasthesia.[5] Individuals who have autism do not show as strong a preference. Jump up ^ Köhler, W (1929).

Lexipedia - Where words have meaning Creative Writing Prompts, Creative Writing Ideas, Creative Writing Exercises, ... — Helping Writers and Poets Get Some Writing Done Create paintings from photos Did you ever wanted to be a great artist? But unfortunately you are really bad at it? Well that's ok because now with Psykopaint you can be a great artist with no skills. But how does it work? Open a photo you like and paint it using a variety of tools like brush, spraycan, ribbon, knife, Psykopaint will choose the colors automatically for you So you don't need to worry about it and focus on a style you like.

Archetype: The Fiction Writer's Guide to Psychology About a little thing called 750 Words One Page Per Day: A web typewriter for authors. 5 Ways Not to Write a Novel Writing a novel? There's first-draft flow, and there's editing flow. And then there comes a time when you think you might be done, yet the manuscript is still not quite "there." To sell your work to an agent, and then to a publisher, and finally to a great many readers, put thoughts of flow aside now, and consider the following advice. Each of the guides mentioned is worthy of your careful attention. , such as "Danielle was a woman of medium height with brown hair and brown eyes." , such as: "He shaved, and then he wiped off the shaving cream," "She walked to the corner, and she looked both ways," or "We opened the door, and we found the mail on the porch." . such as the following: the difficult task, both share, blend together, on account of, considering the fact that, report back. [Better: Add some tension, impending tension, or trouble to every page. * Did you miss my post about the sometimes unpolished writing of Stephen King ? * Or the one about best writers' resolutions ?

10 Creative Block Breakers That Actually Work Doesn't matter what you call it: writer's block or creative block or simply "Where is my inspiration when I need it?!" All creative individuals find their work coming less easily at some times than others. That's when you need strategies, and plenty of them. There are at least 90 such tips, tools, and techniques in , edited by Alex Cornell, with a foreword by Erik Spiekermann. is a fresh compilation of practical, real world solutions offered by a range of creative individuals, including graphic designers, artists, writers, and photographers. These are people who are employed in jobs where they are required to be creative, regularly (brief bios are in the back of the book). The insights in this perkily designed, light-hearted, and useful little volume are sometimes amusing, often unexpected. to find it more compelling. Place an ink-stained handprint on its blankness so you have something to fix. You can't criticize the results. in your episodes of creative block. , not just one. Blocked?