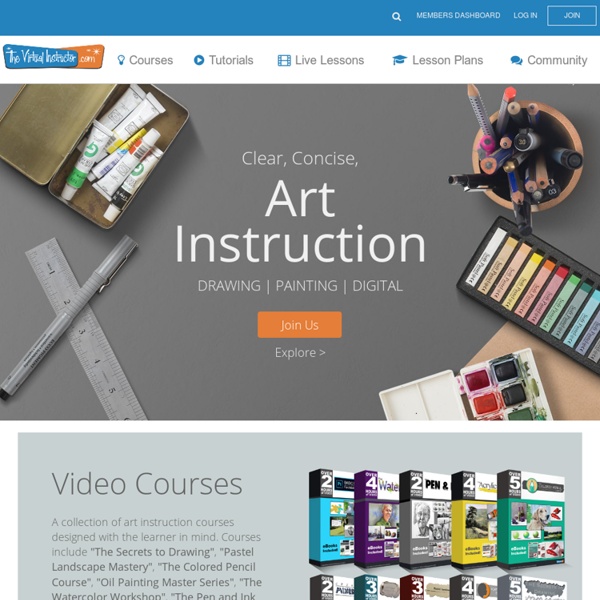 Learn how to Draw, Paint, and create Digital Art Welcome to TheVirtualInstructor.com, your online source for high-quality art lessons. This site is constructed for you. Whether you are an artist, an aspiring artist, a student, a teacher, want art instruction at home, or if you are just curious, TheVirtualInstructor.com has a tutorial for you. Some of these tutorials require membership, but many of the tutorials are free. This site is jam-packed with drawing tutorials, painting lessons, videos, art fundamentals, and resources - all of which are high-quality.

Monster Zero x SciFi Japan jellydonut25 wrote:yes lets move on, this thread has some merit (nice pics btw legion) and to have it devolve into name-calling "you're clearly a virgin because you like Godzilla" type stuff would be a shame Especially from two members who have been here for so long. No need to be fighting, guys. How to Draw a Portrait of the Head The most important part of a drawing is the start, not the finish. This tutorial will focus on how to start a portrait drawing, using basic blocking-in techniques. When drawing a portrait from life, you don’t want to just jump-in and draw. I always walk around the model to get a better understanding of the model and plan out my composition.

Godzilla 3D News And Info: A Classic Godzilla Comic Strip - The Monsters That Devoured Canarsie Written By: Ken Hulsey Ah, it was a great time to be a Godzilla, and monster movie fan in general, during the 1970s. There were several great monster movie magazines and fan publications produced during the decade, including Forrest Ackerman's "Famous Monsters of Filmland" and Dean Latimer's "The Monster Times." Well, today I want to flash-back to the groovy 70s, and Latimer's "Monster Times" for a great Godzilla related comic strip called "The Monsters That Devoured Canarsie." Realistic Eyes Have trouble drawing eyes? Well, you’re probably not alone. Eyes are the first thing that the viewer is drawn to in a portrait. To make sure you create a lasting impression, you need a few techniques to create a sense of realism. A quick rundown on the basics of drawing realistic eyes after the jump! What you’ll need:HB (#2) Pencil, 4B pencilEraserDrawing paperDrawing surface

The World's Most Unusual Data Centers at WhoIsHostingThis.com Whether you’re on a PC, tablet, or smartphone, chances are you rely on a series of data centers to access the websites, email, and applications you use every day. It’s easy to take these hubs of connectivity and commerce for granted, but hidden among the more than half a million data centers are some truly innovative and intriguing marvels of technology. In the craggy mountains of Sweden, hosting provider Bahnhof gave new life to a former military bunker in 2007, transforming it into a data center straight out of an Ian Fleming novel. Anyone passing through the reinforced doors of this “nuke-proof” hosting provider will find themselves beneath almost 100 feet of solid rock, surrounded by retro-futuristic flourishes like underground waterfalls, simulated daylight, and a backup system powered by old submarine engines. Steeped in high-tech mystique, Bahnof was a natural choice to host several servers for the controversial information clearinghouse Wikileaks.

How to Think of What to Draw Edit Article Edited by Dvortygirl, Laptop123, Nicole Willson, Random and 41 others Have you been inspired to draw, including getting inspiration from famous artists, or are just doing it for fun? Drawing can often be fun, but sometimes it can be hard to think of ideas for what to draw. Well, don't worry about that -- there are many, many different ideas - just read this article to find out what they are. Ad Gazette du Bon Ton Antique Fashion Prints 1912-1913 L'Epousee aux Dentelles by Alex Rzewuski BTG19 $125 Each single print measures approximately 7 1/4 inches wide by 9 1/2 inches long. We at Panteek are unexpectedly entranced by the beauty of these rare pochoir illustrations from the magazine Bon Ton Gazette published by Lucien Vogel 1912-1928. Designed as a journal to appeal to the elite of Paris, full of high fashion plates and chatty articles on all aspects of life for the privileged, it transcends its mundane goals through the incredible quality of the publication from the high quality paper to the breath taking beauty of the prints and the high quality of the art throughout. Here in the so called “forgotten years” of the 1920’s we see the art that evokes the whole gamut of that fabulously creative era in France, from the Impressionists and the Fauves to the Cubists, Belle Epoque, Art Nouveau & Deco periods.

Preparing for Your Digital Afterlife at WhoIsHostingThis.com For as long as the human race has existed, we’ve been (perhaps understandably) more than a little concerned about what happens when we die. Past civilizations envisioned everything from chilly limbos to lush gardens of delight, but modern humans have a problem the ancients never needed to consider: what becomes of our online selves when we die? It’s a question that’s growing more and more pressing with every passing year. On Facebook alone, more than 30 million accounts now belong to the dead, and with an average of three Facebookers dying every single minute, the ranks of the dead continue to swell.

How to Draw the Nose Update 09-26-2012 – Above is a video version of this tutorial. For more video tutorials visit Proko.com and subscribe to the newsletter In this tutorial I will go over the structure of the nose and give detailed information about the bridge, ball, and nostrils of the nose. At the end, I will show a step by step of a nose drawing. How to Disappear Online at WhoIsHostingThis.com Home » Data Visualization » How to Disappear Online New round here? Be sure to subscribe to our RSS feed. Social media has made everyone’s life an open book (one that’s open a bit too far in some cases).

Perspective - How to Draw Perspective An understanding of perspective drawing is important no matter what subject you choose. It's easier than you think. Just start at the beginning, follow the examples, then progress to the next lesson when you are comfortable. Don't be afraid to experiment with perspective drawing. Your eyes will tell you when something looks right or wrong. Have fun! Lackadaisy Expressions - StumbleUpon Boy, I didn't know what I was getting myself into when I started this. I've had requests for some sort of expressions tutorial dating back a while now, so I figured, "Sure! I can explain expression drawing...and it'll be way better than all those tutorials out there that are nothing but charts of generic expressions. Yeah!