26 iPad Apps For A Paperless Classroom 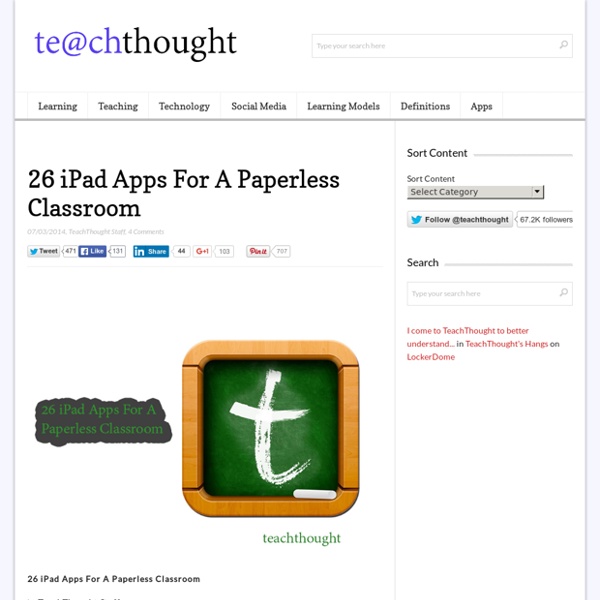 26 iPad Apps For A Paperless Classroom by TeachThought Staff The paperless classroom is a compelling concept for what it symbolizes as much as anything else. While it sounds sleek and futuristic and easy to organize and environmentally friendly, the reality is that paperless classrooms aren’t that simple. The “environmentally-friendly” part, for example, is wildly subjective: the costs of manufacturing–and eventually recycling and disposing of–tablets versus the loss of “renewable” trees and the subsequent waste that is environmentally-friendly. The same with being organized. But what a paperless classroom represents is important. But if you’re looking for tools to give it a go, the following 26 ipad apps for a paperless classroom can help. 26 iPad Apps For A Paperless Classroom; Related Posts 14 Teacher-Recommended Classroom Management Appsby edshelf: Reviews & recommendations of tools for education One of the top frustrations of classroom teachers is behavior management.

Using E-Portfolios in the Classroom For decades, students have been completing assignments in school. Often, these were seen only by the teacher, graded and returned to the student. Sometimes, the work was posted on a classroom wall or in a school hallway. Many teachers kept portfolios of student work for report card conferences, and the rare teacher taught students how to build their own portfolios from their work. With more and more schools going paperless or migrating to the "cloud" (storing files on the Internet), student work has become more easily shareable, accessible by many, and more easily organized. Many teachers have turned to digital portfolios -- or "e-portfolios" -- for their students.

Apps That Rise to the Top: Tested and Approved By Teachers Michelle Luhtala/Edshelf With the thousands of educational apps vying for the attention of busy teachers, it can be hard to sift for the gold. Michelle Luhtala, a savvy librarian from New Canaan High School in Connecticut has crowd-sourced the best, most extensive list of apps voted on by educators around the country. “I wanted to make sure we had some flexibility because there’s no one app that’s better than all the others,” Luhtala said.

Educational Technology and Mobile Learning: Video Tutorials for Teachers on U... July 3, 2014 Talking about augmented reality technology in teaching and learning the first thing that comes to mind is this wonderful app called Aurasma. Since its release a few years ago, Aurasma gained so much in popularity and several teachers have already embraced it within their classrooms. For those of you who are not yet familiar with how Aurasma works and how to use in it in your class, the video tutorials below will help you out. Aurasma is an augmented reality app that’s changing the way millions of people see and interact with the world. Bring tagged images, objects and even physical locations to life with interactive digital content, such as video, animations and 3D scenes ( called Auras).

60 Apps to Teach STEAM in the Classroom Using a tablet to explore STEAM concepts is a natural pairing—as kids drag, draw and create they learn more about technology and the world around them. That's why we've gathered 60 of our favorite apps for teaching STEAM in the classroom, with recommendations for every grade level. Read on to get our list! Science Apps for Grades K-2 A Short Overview of 12 Tools for Creating Flipped Classroom Lessons One of the most frequent requests that I get is for suggestions on developing flipped classroom lessons. The first step is to decide if you want to create your own video lessons from scratch or if you want to develop lessons based on videos that others have produced. In this post we'll look at tools for doing both. Developing flipped lessons from scratch with your own videos. The benefit of creating your own videos is that you can tailor them to exactly match your curriculum. The drawback to this is that it requires more time on your part.

The Teacher's Guide To Flipped Classrooms Since Jonathan Bergman and Aaron Sams first experimented with the idea in their Colorado classrooms in 2004, flipped learning has exploded onto the larger educational scene. It’s been one of the hottest topics in education for several years running and doesn’t seem to be losing steam. Basically, it all started when Bergman and Sams first came across a technology that makes it easy to record videos. They had a lot of students that regularly missed class and saw an opportunity to make sure that missing class didn’t mean missing out on the lessons. Once students had the option of reviewing the lessons at home, the teachers quickly realized the shift opened up additional time in class for more productive, interactive activities than the lectures they’d been giving.

The 15 Best iPad Apps For The World Language Classroom The iPad has fundamentally changed how and what I teach in my Spanish classes. First of all, I no longer use textbooks. Ever. Why would I when everything I need and more is available online or through an app? As educators, we are often told to teach students “21st century skills”, but let’s be honest, more often than not; it is the teachers who need to become more proficient in how to reach young people through technology. 21 Things You Didn't Know Your iPhone Could Do Your iPhone can do all sorts of magical things that you probably aren't aware of. Here's a list of some of the iPhone's coolest hidden features. 1. Shake to undo