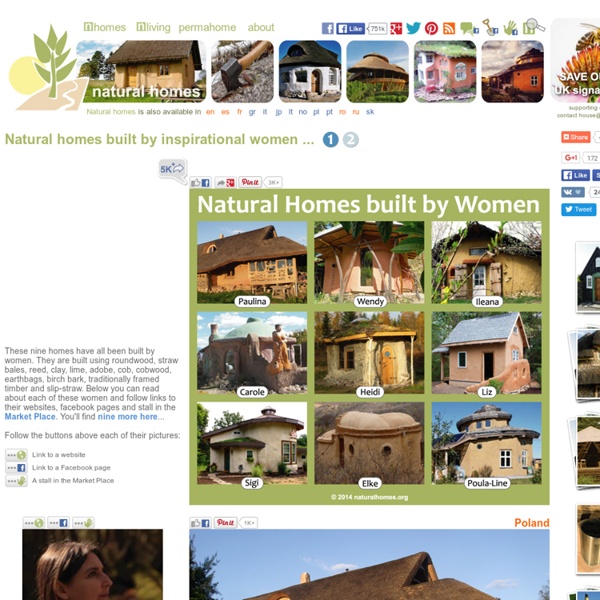 Cob Builders Handbook: Making Test Bricks To figure out a good mix for your soil, make up some test bricks. Try various recipes and combinations, making sure you label each one carefully so you can reproduce the best ones. Make your first couple of test bricks out of the soil from the site or from where you've dug out for the foundation. One easy way to check the clay shrinkage in your test bricks is to bury in a stick the same length as the brick. When the bricks have dried completely, have a look at them. If you want to reassure yourself and do a more extensive test, build a garden wall, an outdoor sculpture, or a bench, and observe how hard it dries and how well it weathers.

What would our homes look like if designed around how we use them? It's probably no secret that the American home is a bit of a porker. In 2013, the median and average new, single family house was 2,478 and 2,662 square feet respectively--higher than previous, 2007 pre- bubble figures. Compare this to 1950, when the average new home was a mere 983 square feet. But somehow the McMansion pill would be a bit easier to swallow if these big homes were used. A book released a couple years ago called "Life at Home in the 21st Century" tracked 32 middle class Los Angelino families as they went about their daily affairs, tracking their movements and habits to see how people actually lived nowadays. What did they find? So the question becomes, if Family 11 is representative of the average American family, and if their home is about average size (tag an upper floor on the 1000 square feet and you're about there) why does their home have so much more room than needed?

BIOTOP Natural Pools | Garden Ponds | Nature Pools Self-ownership is irrelevant in the abortion debate | Your social constructs are showing Self-ownership is a fallacious concept that sounds nice, but doesn’t do women any favors. In the abortion debate, this takes the form of,”Women can do whatever they want with their bodies.” Yet such a concept is not pro-abortion, instead tip-toeing around in an attempt to be a balanced view and make the issue an individualistic and not a collective one. Women need to have this policy completely decided now, either supportive of abortion or not. We do not own our bodies, because if we did, that implies we can give ownership over to someone else. You cannot be the owner of something and the owned at the same time. I noticed also that when people start talking about refusing to procreate or are even just criticizing heterosexuality, the arguments tend to devolve to,”But humans need to reproduce or they’ll go extinct! That’s not even talking about the number of unwanted children in the U.S - 1/3 of births are unintended x - – 1.5 million homeless children in America X Like this: Like Loading...

Top 8 Basic Home Design Flaws - Verge Permaculture Over the past 10 years I’ve seen a lot of mistakes in home design in both urban and rural properties. Over the next few blog posts, I want to look at some of those blunders and point to possible solutions. I’m writing this partly for myself and partly for all the folks out there who want to build their own homes right. But before I begin, let me tell you my biases so that it will help you understand how I critique design: I believe the next 20 years will be fundamentally different than the past 20. As a consultant, I see all too often people rushing through the design phase only to make a ton of changes during construction. Home Design Flaw #1: Too Big Cheap natural gas, propane, and electricity have fooled people into thinking they can build massive without consequences. I’ve lived in a 1,000 square-foot bungalow for almost 10 years now, with my wife, mother-in-law, two kids and two staff. Home Design Flaw #2: Building for a View Home Design Flaw #3: Basements and Sump Pumps

Three Tent Home A homes in Northern, California comprised of three tents and outdoor living/cooking area. Tents by Sweetwater Bungalows. Photos by Fair Companies. Video tour here. She Brought Old Cinder Blocks Into Her Living Room. When I Saw Why? I'm Doing This! Upcycling ideas are my favorite kinds of DIY projects. Anytime I can transform something that has been taking up space in my garage into something new and useful, I am excited to give it a try. I’ve heard about creative ideas like repurposing old picture frames but I never thought that these old building materials could be so perfect for my next DIY project. Leftover cinder blocks might seem like junk at first glance, but there are seemingly endless possibilities for upcycling them into something new. Scroll through below to see these cool and creative ideas, and let us know your favorites in the comments. Please SHARE if you love creative new uses for old cinder blocks!