Aquascaping Is Underwater Art Unlike Anything You’ve Ever Seen 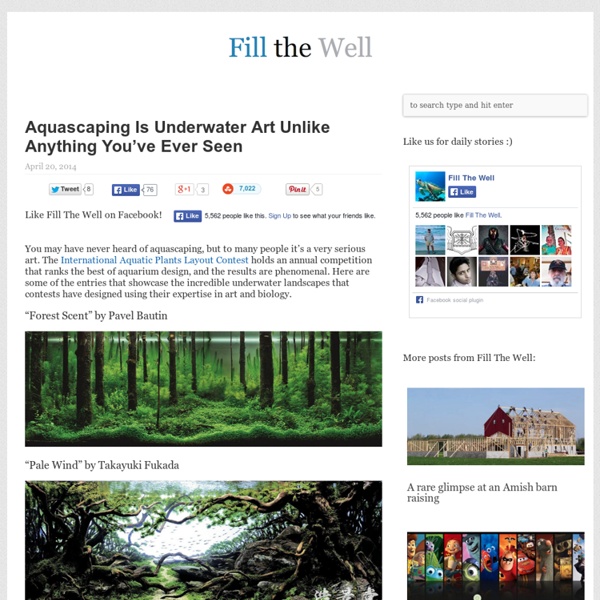 Like Fill The Well on Facebook! You may have never heard of aquascaping, but to many people it’s a very serious art. The International Aquatic Plants Layout Contest holds an annual competition that ranks the best of aquarium design, and the results are phenomenal. Here are some of the entries that showcase the incredible underwater landscapes that contests have designed using their expertise in art and biology. “Forest Scent” by Pavel Bautin “Pale Wind” by Takayuki Fukada “Whisper of the pines” by Serkan Çetinkol “Verve!” “Way to heaven” by Dmitriy Parshin “Wild West” by Stjepan Erdeljić By Georgi Chaushev By Francisco Wu By Long Tran Hoang “Pilgrimage” by Shintaro Matsui If you liked this, please share: Related:  crafting

Tiny Houses That Are Cooler Than Mansions Whoever said bigger is better must have never stepped foot into one of these tiny, but totally awesome houses. That, or they had already bought a mansion and didn't keep their receipt. The houses below are really quite amazing. I was already on board with the smaller home thing when I realized there'd be less cleaning, but now that I've seen what you can do with such little space, I'm very much into it. I won't say tinier is better, since it's subjective, but smaller is definitely super! Take a look! Millau, France Machynlleth, Wales Weston Super Mare, England Ojai, California Hampshire, England Green Mountain, North Carolina Seguin, Texas Turin, Italy Stanwood, Washington Rocky Mountains, Colorado (via Tiny House Swoon, H/T Lifebuzz) These are so awesome. Share these awesome lil houses with others by using the buttons below.

What This Guy Does Using Just Post-It Notes Is Terrifying. #14 Is Insane. Artist Don Kenn opens a window to a different world when he draws monsters on post-it notes. Don't be afraid alone. Share this with your friends by clicking below! The Future Global Universe Origami Butterfly by Akira Yoshizawa - tutorial Today is the 101st birthday of Akira Yoshizawa, the great origami master and the father of the modern origami. You have probably noticed that Google marked the occasion with a special origami doodle created by Robert Lang! Why not celebrate the event by making your own origami butterfly?! Here is a step-by-step tutorial for a 3-d variation of a classic butterfly by Akira Yoshizawa (first spotted on Nick Robinson’s blog), enjoy! UPD. Tags: Akira Yoshizawa, Animals

The Cradle-to-Cradle Alternative By William McDonough & Michael Braungart, ©2003 from State of the World 2004 (Worldwatch / W.W. Norton, 2004) Imagine a world in which all the things we make, use, and consume provide nutrition for nature and industry—a world in which growth is good and human activity generates a delightful, restorative ecological footprint. While this may seem like heresy to many in the world of sustainable development, the destructive qualities of today’s cradle-to-grave industrial system can be seen as the result of a fundamental design problem, not the inevitable outcome of consumption and economic activity. This new conception of design—known as cradle-to-cradle design—goes beyond retrofitting industrial systems to reduce their harm. Cradle-to-cradle design, on the other hand, offers a framework in which the effective, regenerative cycles of nature provide models for wholly positive human designs. Over the past decade, the cradle-to-cradle framework has evolved steadily from theory to practice.

Childhood = Ruined: These Realistic-Looking Pokémon Are Absolutely Terrifying (Photos) Stock photos — they’re literally everywhere. If you’re an avid web-surfer, you’ve seen them used on various websites and online publications. If you like to walk around major cities, you’ve seen them used in advertisements. If you were looking to have fun in the tristate area back in the 1980s, there’s a high chance you placed all your bets on Action Park in New Jersey. Re-creating any kind of photo generally takes an ounce of creativity and a whole lot of skill. Famous musicians are already incredibly influential, so it was only a matter of time before they not only filled our homes with beautiful music, but also became our homes. Ever walk by a restaurant and have to do a double-take after seeing its outrageously absurd name? New 3D-printing technology has been taking the world by storm lately.

architecture - My Modern Met The LEAF kitchen by Dutch company Culimaat High End Kitchens is a modern room that’s inspired by nature. Its clean, minimalist aesthetic is accented by the stunning island in the center. Designers didn’t follow conventional geometric forms and instead opted for a rounded, organic shape that, in certain angles, seems to flow from the ground. Although the kitchen might look like it’s lacking in features, it’s actually well-equipped with a complete set of modern appliances. The design cleverly hides them when not in use but they’re still within an arm’s reach. Storage space was created in the wall units, and it’s where the oven, steamer, dishwasher, refrigerator, and wine cooler are also installed. To construct LEAF, Culimaat used a material called HI-MACS, which is a smooth, non-porous acrylic stone that’s heat resistant; it made the graceful curves of the kitchen island…

Star Box I suppose it isn't exactly the right time of year for stars and lanterns, but I've got a paper folding fascination at the moment and so was drawn to a project I had wanted to do back in Autumn. During last lantern season I was looking everywhere for instructions to make these beautiful paper lanterns and couldn't find them anywhere. I ended up purchasing a lantern that was already made and since I've been struggling with some difficult folds and designs of other paper crafts, I decided to unfold the seemingly simple lantern I bought and figure the thing out for myself. Since in my own quest for instructions I crossed paths with many other people looking for the same thing, I thought I'd do my best to share what I learned. Begin with a 12" square of paper to end up with a lantern that is about 7" across when complete. (Feb., 2012 edit: A video tutorial of this project can now be found here.) For crisper creases and to help fold thicker card stocks, try using a bone folder.

Deep ecology Deep ecology is a contemporary ecological and environmental philosophy characterized by its advocacy of the inherent worth of living beings regardless of their instrumental utility to human needs, and advocacy for a radical restructuring of modern human societies in accordance with such ideas. Deep ecology argues that the natural world is a subtle balance of complex inter-relationships in which the existence of organisms is dependent on the existence of others within ecosystems.[1] Human interference with or destruction of the natural world poses a threat therefore not only to humans but to all organisms constituting the natural order. Deep ecology's core principle is the belief that the living environment as a whole should be respected and regarded as having certain inalienable legal rights to live and flourish, independent of their utilitarian instrumental benefits for human use. Principles[edit] These principles can be refined down into three simple propositions: Development[edit]

Vertical Gardens: A Look Into Six Of The World's Best Green Walls - TheUrbanDeveloper.com As the world’s population increases and cities become denser, the demand and popularity of vertical gardens is on the rise. The concept of a vertical garden is not a new one, however with increased urbanisation, the benefits of vertical gardens and green walls are becoming significantly more important. Here we look at six of the world’s best vertical gardens: Tree House – Singapore Standing 24 storey’s tall in Bukit Timah, Singapore, Tree House is a recently completed condominium developed by City Developments Limited. The two vertical gardens on the facade of the apartment building span 2,289 square metres, making it the largest vertical garden in the world according to The Guinness World Records. The development, which also features heat reducing windows and motion sensor lighting is expected to save more than $500,000 in energy and water savings annually. Central Park – Sydney Related Article: Frasers Property’s Central Park Awarded Three Green Star Ratings Rubens Hotel – London