How not to say the wrong thing 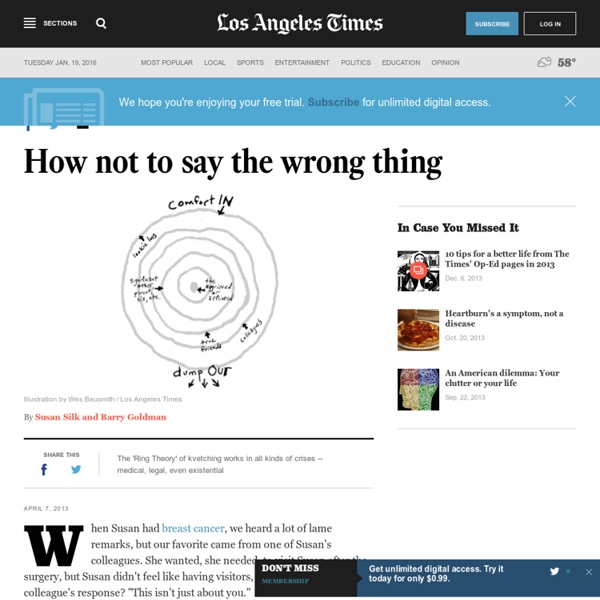 When Susan had breast cancer, we heard a lot of lame remarks, but our favorite came from one of Susan's colleagues. She wanted, she needed, to visit Susan after the surgery, but Susan didn't feel like having visitors, and she said so. Her colleague's response? "This isn't just about you." "It's not?" Susan wondered. The same theme came up again when our friend Katie had a brain aneurysm. YEAR IN REVIEW: 10 tips for a better life from The Times' Op-Ed pages in 2013 This woman loves Katie, and she said what she did because the sight of Katie in this condition moved her so deeply. Susan has since developed a simple technique to help people avoid this mistake. Draw a circle. Here are the rules. Everyone else can say those things too, but only to people in larger rings. When you are talking to a person in a ring smaller than yours, someone closer to the center of the crisis, the goal is to help. Comfort IN, dump OUT. Most of us know this. And don't worry. Susan Silk is a clinical psychologist.

Woman Endures Endless Catcalls During 10 Hour Walk In NYC: Gothamist A woman wearing jeans and a crewneck t-shirt walked around NYC for ten hours with a hidden (to everyone else) camera fixed on her. Below is the result, which features a greatest hits of catcalls, like: "Smile!" and "Hey baby!" Also featured is the most infuriating catcall of all: "Somebody's acknowledging you for being beautiful—you should say thank you!" Ladies whenever will we learn to smile and thank our street harassers? On the non-verbal side, there's a cameo by the creepy lingerer who decides to walk right next to you forever like you're on you're on a goddamn first date or something.

Auditory Illusions : Holophonic Sound update: July 27, 2008 – Mike Costa emailed me tonight with this tidbit.. I thought I’d share the information and link. Thanks to Mike for the 411. Hey, I just got a Stumble Upon your bog about “holophonic sound” today and though you might be intersted to know that it was more-than-likely recorded with one of these: A Neumann KU 100, two microphones that are essentially a replica of a human head. Now you know! Childhood Depression: What Parents Can Do To Help Article Body Encourage Healthy Habits These include exercise, outdoor play, healthy diet, sleep, limiting screen time, one-on-one time with parents, praise for positive behavior, and acknowledgment of the child’s strengths. Caring for oneself can be honestly presented as therapeutic. Consider the Environment Think about whether there are grief and loss issues in your child and/or other family members.

It’s a “Story Problem”: What’s Behind Our Messed-Up Economy by David Korten The peoples of earlier times prospered from the guidance of simple stories that offered answers to their deepest questions. We need those now more than ever. posted Jul 18, 2013 For people, generally, their story of the universe and the human role in the universe is their primary source of intelligibility and value. ... The deepest crises experienced by any society are those moments of change when the story becomes inadequate for meeting the survival demands of a present situation. —Thomas Berry, Dream of the Earth 27 Badass Images Of Women Winning And Exercising The Right To Vote In 1921, Missouri voters passed a ballot measure amending the state constitution to allow women to hold political office. This was also the first election after the passage of the 19th Amendment, granting all U.S. women the right to vote. The ability of women's votes to affect women's lives revealed itself instantly, and it's as pressing as ever in 2014.

The Loneliness Of Not Knowing Ourselves People are “connected” to others more than ever before because of technology: Texting, emailing, social-networking—we are constantly plugged in and communicating with other people from across town to the other side of the world. But are we really sharing our lives, or are we just passing information back and forth? Are we actually “connecting” with others, or are we like stones skipping across the surface of relationships, never diving into their depths? Mood Disorders and Teenage Girls Ron J. Steingard, MD Associate Medical Director; Senior Pediatric PsychopharmacologistChild Mind Institute Anxiety and depression occur in both genders, but by the teenage years, girls are much more at risk than boys. Before puberty, the prevalence of mood disorders is about the same in boys and girls—3 to 5%. But by mid-adolescence girls are more than twice as likely to be diagnosed with a mood disorder as boys, with the prevalence at adult levels, 14 to 20%.

Every President’s Executive Orders In One Chart President Obama is due to announce an executive action Thursday, one that will change the legal status of millions of immigrants and is likely to be remembered as a major effort to change the country’s immigration system. The action would reportedly allow up to 4 million undocumented immigrants legal work status, and an additional 1 million protection from deportation. It would be one of the most wide-reaching executive actions in history. That has made Republicans furious. The New York Times has a good roundup of the reaction, including quotes from Sens. John Cornyn (“I believe his unilateral action, which is unconstitutional and illegal, will deeply harm our prospects for immigration reform”) and Tom Coburn (“The country’s going to go nuts, because they’re going to see it as a move outside the authority of the president, and it’s going to be a very serious situation”).

The Night My Girlfriend Dissociated and Forgot Who I Was Images by Mark Duffy The situation, as it stood, couldn't have looked much worse. A man had cornered a tearful, terrified woman in the lobby of an apartment building and wouldn't let her leave. If another person entered at that moment, the woman would say the man was a complete stranger. She'd say she had no recollection of how she'd got here.

Show Your Work: Austin Kleon on the Art of Getting Noticed by Maria Popova How to balance the contagiousness of raw enthusiasm with the humility of knowing we’re all in this together. In 2012, artist Austin Kleon gave us Steal Like an Artist, a modern manifesto for combinatorial creativity that went on to become one of the best art books that year. He now returns with Show Your Work! #HistoricPOC Is the Powerful Illustration of Black History Month Everyone Needs to See A new viral hashtag is shattering stereotypes about the way many Americans view Black History Month. #HistoricPOC, founded by #solidarityisforwhitewomen hashtag creator Mikki Kendall, has taken social media by storm this week. She created a platform to showcase the diversity of multiculturalism and race throughout America's history and prove that there is so much more for us to learn. Understanding the power of the photograph, Kendall's goal in creating the hashtag was to try to dismantle the singular narrative of American history pervasive throughout both the media and the education system. "I have a history degree.