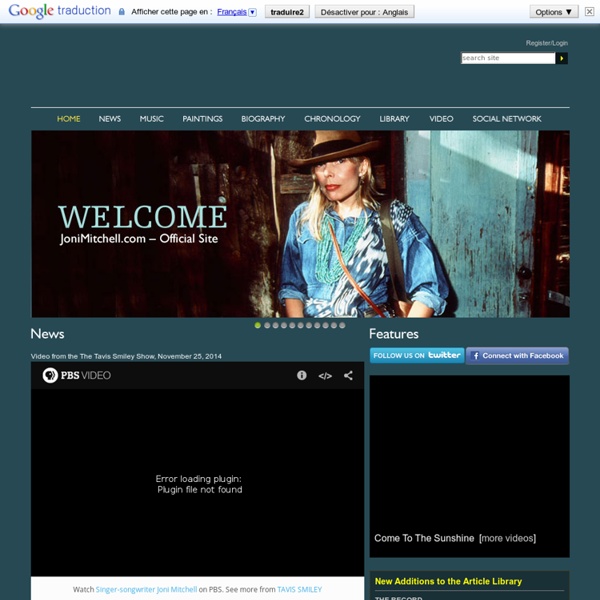 Sufjan Stevens | Asthmatic Kitty Records Sufjan Stevens is a singer-songwriter currently living in Brooklyn, NY. A preoccupation with epic concepts has motivated two state records (Michigan & Illinois), a collection of sacred and biblical songs (Seven Swans), an electronic album for the animals of the Chinese zodiac (Enjoy Your Rabbit), two Christmas box sets (Songs for Christmas, vol. 1-5 and Silver & Gold, vol. 6-10), and a programmatic tone poem for the Brooklyn-Queens Expressway (The BQE). His most recent records are from 2010: an expansive EP (All Delighted People) and the full length The Age of Adz, a collection of songs partly inspired by the outsider artist Royal Robertson. Born in Detroit and raised in Northern Michigan, Sufjan attended Hope College, in Holland, Michigan, and the masters program for writers at the New School for Social Research.

Project Gutenberg - free ebooks online download for iPad, Kindle, Nook, Android, iPhone, iPod Touch, Sony Reader Joni Mitchell Tribute Grows As Community Adds Notes, Art In Hayes Valley | Hoodline A tribute to singer songwriter Joni Mitchell in Hayes Valley is getting some grassroots attention from members of the local community. Earlier this month, SFJAZZ installed a large tribute to the singer on the side of a Franklin Street building across from the jazz center. Now, it's being added to by neighbors and residents who wish to offer their own gestures of gratitude for Mitchell's music and art. Handmade signs, paintings and poems are popping up daily on a chain-link fence below SFJAZZ's tribute. SFJAZZ honored Joni Mitchell with a lifetime achievement award this year—an event she was planning on attending before she fell ill several weeks ago. Marshall Lamm from SFJAZZ says the center supports the community's interaction with their tribute. "Almost immediately after the unveiling, people spontaneously began attaching cards, flowers, and messages to the fence.

beefbone music Dining philosophers problem - My first Java applet Joni Mitchell on Therapy and the Creative Mind By Maria Popova It’s paradoxical that while “art holds out the promise of inner wholeness” for those who experience it, the relationship between creativity and mental illness is well-documented among those who make it, as is the anguish of artists who experience it. This, perhaps, renders the cultivation and preservation of mental health all the more urgently important for artists and those operating on a high frequency of creativity. Eight-time Grammy recipient Joni Mitchell (b. When Marom asks why Mitchell chose to record her unusual cover of Annie Ross’s old jazz song “Twisted” from the 1974 album Court and Spark — a song about psychoanalysis — she answers, half-jokingly, that her own experience of therapy earned her “the right to sing it.” And yet Mitchell sees therapy as a kind a clarifying tool for her inner life, for her priorities and values, at a point in time: Ultimately, however, she champions the benefits of therapy unequivocally: I think it did me a lot of good.

Jurassic5 Home : Kacey Musgraves Welcome - The Ukulele Orchestra of Great Britain DEEP SEA DIVER Reviews | The Duckworth Lewis Method On paper, a band and album created around the concept of cricket has the sound of something rather niche, hardly universal, and perhaps a little tongue-in-cheek. Clearly their love of the game was very genuine but the greatest thing about The Duckworth Lewis Method was its ability to truly strike a chord beyond the boundary of the cricket field with brilliantly crafted, clever pop songs that were accessible to anyone whether or not they knew their LBW from a googly. This applies even more on the band's second inning, Sticky Wickets. It's quite a challenge for Hannon and Walsh to come back with fresh ideas after pouring what appeared to be every ounce of cricketing history and folklore into their debut. The opening track 'Sticky Wickets' is a pretty direct 70s style prog-rocker with plenty of cowbell. And really it is the songs that find a greater depth that make this collaboration so special. These more serious moments aside, Sticky Wickets is, as you might suspect, a lot of fun too.