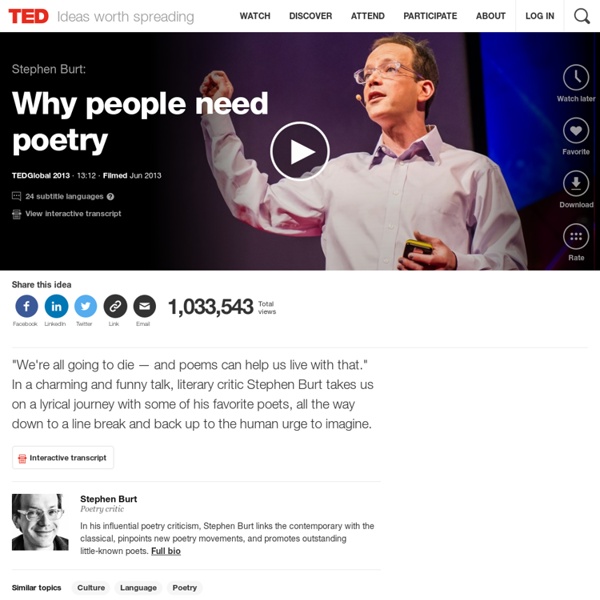 10 poems to read on National Poetry Day In honor of National Poetry Day, TED-Ed asked writing teachers at the San Francisco Writers Grotto to recommend their favorite poems worth sharing. Below, a short poetry reading list for TED-Ed learners of all ages. Constance Hale, author of Sin and Syntax: How to Craft Wickedly Effective Prose, recommends: “Design” by Robert Frost For younger readers, I would go with some of the easier Robert Frost poems, which would set the stage for the more complex ones. “Design” is a great one for middle school students, allowing a good discussion of imagery and metaphor and rhyme (when it works and when it doesn’t) and structure … and the lessons of nature. Caroline Paul, author of Lost Cat: A True Story of Love, Desperation, and GPS Technology, recommends: Billy Collins, in general Poetry is about concision, beauty — and the sudden swerve that tweaks the reality we thought we knew. Ethan Watters, author of Crazy Like Us: The Globalization of the American Psyche, recommends:

The Lake Isle of Innisfree by William Butler Yeats I will arise and go now, and go to Innisfree, And a small cabin build there, of clay and wattles made; Nine bean-rows will I have there, a hive for the honey-bee, And live alone in the bee-loud glade. And I shall have some peace there, for peace comes dropping slow, Dropping from the veils of the morning to where the cricket sings; There midnight’s all a glimmer, and noon a purple glow, And evening full of the linnet’s wings. I will arise and go now, for always night and day I hear lake water lapping with low sounds by the shore; While I stand on the roadway, or on the pavements grey, I hear it in the deep heart’s core. Buy or borrow this book: Source: The Collected Poems of W. Biography William Butler Yeats is widely considered to be one of the greatest poets of the twentieth century. Continue reading this biography

How to choose your news - Damon Brown How the media landscape has changed Media visionary Clay Shirky gave a TED Talk on how the media landscape has changed. “The moment we’re living through, the moment our historical generation is living through, is the largest increase in expressive capability in human history.” In other words, the amount of information we are capable of capturing is unprecedented. Watch Clay Shirky’s fascinating media discussion on TED-Ed. Understanding social media The TED Book “Our Virtual Shadow: Why We Are Obsessed with Documenting Our Lives Online” discusses the challenges of social media turning every day folks into journalists. You can read an excerpt of Our Virtual Shadow on the TED blog. Journalism can be much more than reporting. In 1992, Stella Liebeck spilled scalding McDonald's coffee in her lap and later sued the company, attracting a flood of negative attention.

10 Ways To Use Poetry for English Language Teaching Online This is in celebration of National Poetry Month and springtime. My daffodil image is in honour of one of the first poems I learnt as a child called ‘I wandered lonely as a cloud‘. We are, perhaps, less lonely here in our cyber-cloud online, which just serves to enhance our ability to appreciate poetry in the modern age. Today I will share some experiences, resources, and ideas about teaching with poetry. 1. When I first decided to teach online in 2010, I made facebook a place to build up my online presence. We tried acrostic poetry, topic-based free form poetry, and shared ideas on using limericks or Haiku poetry. This kind of synergy spread like wild fire and literally changed the way our language learners could experience English. As this work was all voluntary, it cannot be seen as sustainable in the long-term. 2. (Must have /deduction and use of modal verbs in the past). Between Us I must have hurt you. by my arrogance.. and you must have forgiven me by your patience.. 3. 4. 5. 6. 7.

Shadow Poetry - Poetry Types Introduction What Is Poetry - This section contains a definition of poetry, poetry is... quotes, and other helpful definitions for beginning poets. Poetry Quotes - An enjoyable collection of famous poetry quotes along with quotes from previous Shadow Poets. Traditional Poetry Forms - Displays a handful of traditional poetry forms. Most of the definitions have at least one example of each particular type of poetry for better understanding. All examples were provided by previous members of Shadow Poetry or Egroup (when Shadow Poetry was an interactive web site). More definitions for related poetry items may be found in the Shadow Poetry Handbook (link located above). Invented Poetry Forms - As a bonus, Shadow Poetry feature poetry forms created by selected poets as new and challenging writing styles.

Ron Mann - Poetry in Motion (1982) Duration: 90 minutes Ron Mann's groundbreaking 1982 documentary feature, Poetry In Motion, remains a treasure-trove of performance and poetry, and poetry-in-performance, and features a stellar group of (mostly North American) poets (twenty-five from a group of sixty-five originally filmed), among them, Allen, Anne Waldman, John Giorno, William Burroughs, Amiri Baraka, Ed Sanders, Robert Creeley, Michael McClure, Gary Snyder, John Cage, and Jim Carroll. Introduced and punctuated by the acerbic thoughts of Charles Bukowski, the film also affords us rare glimpses of such legendary figures as Ted Berrigan and Helen Adam and - it was partially Canadian-financed - Christopher Dewdney (reading a, perhaps, Christopher Smart-influenced piece), and "The Four Horsemen" (Rafael Barreto-Rivera, Paul Dutton, Steve McCaffery, and bpNichol). It was re-released in 1994 in an innovative format on CD-R0m (the CD-Rom remains available), and, in 2002, as a DVD. 1. UbuWeb Film | UbuWeb

In Texas by May Sarton Share In Texas the lid blew off the sky a long time ago So there's nothing to keep the wind from blowing And it blows all the time. Everywhere is far to go So there's no hurry at all, and no reason for going. In Texas there's so much space words have a way Of getting lost in the silence before they're spoken So people hang on a long time to what they have to say; And when they say it the silence is not broken, But it absorbs the words and slowly gives them Over to miles of white-gold plains and gray-green hills, And they are part of that silence that outlives them. Nothing moves fast in Texas except the windmills And the hawk that rises up with a clatter of wings. (Nothing more startling here than sudden motion, Everything is so still.) In time like a great swelling never-ending ocean, And the houses that ride the tawny waves get smaller As you get near them because you see them then Under the whole sky, and the whole sky is so much taller With the lid off than a million towers built by men. Noah Smith

TED TALK Ignorance Using music and songs | TeachingEnglish | British Council | BBC Songs sung in English are listened to around the world and students can often feel real progress in their level of English when they can begin to sing along to the chorus or even just to be able to separate what at first seemed to be a constant stream of words! I am going to split this article into using music and using songs and I will share twelve of my favourite activities with you. Before bringing music into the class, it may be worthwhile to do a music survey or questionnaire to find out what the students enjoy listening to. As much as possible try to use music they will like. I have found that the students’ motivation levels are the determining factor in whether or not a song will work with them. Using music Music in the classroom doesn’t always mean listening to a song and using the lyrics in some way. Set the scene: If music is playing as students enter the class it can be a nice way to settle the group. I hope that at least some of these ideas will be good for your classes.