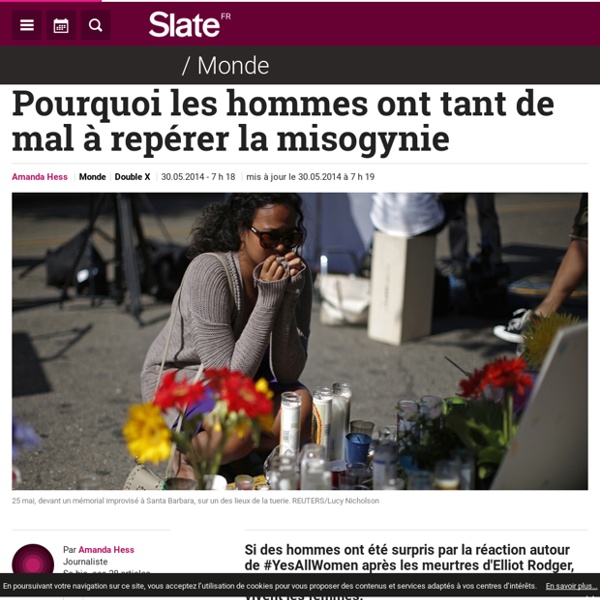 7 Things I Learned Reading Every Issue Of ISIS's Magazine #3. Here's What Scares ISIS Obviously, Dabiq is propaganda. But you can learn a lot about what scares a given regime by reading its propaganda, and ISIS is no exception. For example: ISIS is having financial trouble right now. The Hypermasculine Violence of Omar Mateen and Brock Turner They are also more likely to promote homophobia, hypermasculinity and male dominance; tolerate violent and sexist jokes; endorse misogynistic attitudes and behaviors; and endorse false beliefs about rape. Accordingly, athletes are responsible for an outsized number of sexual assaults on campus, and women who attend fraternity parties are significantly more likely to be assaulted than those who attend other parties with alcohol and those who don’t go to parties at all. Status, masculinity and violent homophobia Omar Mateen’s crime is related to this strand of masculinity. Mateen’s father told the media that his son had previously been angered by the sight of two men kissing, and reports claim that he was a “regular” at the Pulse nightclub and was known to use a gay hookup app.

We Met Syria's War Refugees: 7 Awful Things They Told Us #3. The Backlash Is Terrifying Here is a video of a camerawoman for a Hungarian TV station happily kicking refugee children: Yes, she was fired. But she's far from the only one -- it turns out that Hungary is the European country that's had the biggest hate-boner for these refugees, even though hardly any of them plan on actually staying in Hungary (we wonder why?). Hungarian Prime Minister Viktor Orban said the following to a group of journalists, so it's apparently official policy: "I think we have a right to decide that we do not want a large number of Muslim people in our country." Of course all men don’t hate women. But all men must know they benefit from sexism This is going to hurt. In the past few months, it has been almost impossible to open a newspaper or turn on a television without encountering a story about another underage girl being raped, another female politician harassed, another trans woman murdered. But as women, girls and a growing number of male allies start speaking out against sexism and injustice, a curious thing is happening: some people are complaining that speaking about prejudice is itself a form of prejudice. These days, before we talk about misogyny, women are increasingly being asked to modify our language so we don’t hurt men’s feelings. Don’t say, “Men oppress women” – that’s sexism, as bad as any sexism women ever have to handle, possibly worse.

Girl trouble: we care about young women as symbols, not as people Another week, another frenzy of concern-fapping over teenage girls. A few days ago, I was invited onto Channel 4 News to discuss a new report detailing how young people, much like not-young people, misunderstand consent and blame girls for rape. The presenter, Matt Frei, tried to orchestrate a fight between myself and the other guest, Labour MP Luciana Berger, because it’s not TV feminism unless two women shout at each other.

7 of the most badass women who ever lived (who you've probably never heard of) For centuries, women all over the world have fought and ruled, written and taught. They’ve done business, explored, revolted and invented. They’ve done everything men have done — and a lot of things they haven’t. My Two Cents on Feminism and Miley Cyrus We’re celebrating the end of the year with our most popular posts from 2013, plus a few of our favorites tossed in. Enjoy! Oddly, three high profile female musicians find themselves in a public debate about what it means to be a feminist.