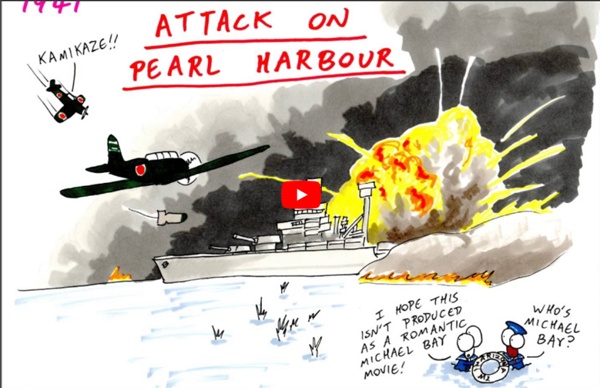 World War II: The Invasion of Poland and the Winter War - Alan Taylor - In Focus In August of 1939, Nazi Germany and the Soviet Union signed a non-aggression treaty. One week later, Germany invaded Poland and World War II began. The first attack of the war took place on September 1, 1939, as German aircraft bombarded the Polish town of Wielun, killing nearly 1,200. Five minutes later, the German battleship Schleswig-Holstein opened fire on a transit depot at Westerplatte in the Free City of Danzig. Use j/k keys or ←/→ to navigate Choose: View of an undamaged Polish city from the cockpit of a German medium bomber aircraft, likely a Heinkel He 111 P, in 1939. In 1939, the Polish army still maintained many cavalry squadrons, which had served them well as recently as the Polish-Soviet War in 1921. Associated Press correspondent Alvin Steinkopf broadcasting from the Free City of Danzig -- at the time, a semi-autonomous city-state tied to Poland. Aerial view of bombs exploding during a German bombing run over Poland in September of 1939 Click to view image

Lesson Plans: Analyzing WWII Propaganda Posters Winning Over Hearts and Minds: Analyzing WWII Propaganda Posters Propaganda played a key part in the United States’ war effort. Although much more subtle, propaganda was as much a weapon of the war as manpower and ammunition. Objective:By examining propaganda posters from WWII students will increase their knowledge of propaganda tools and develop an understanding of the specific goals and strategies used by the U.S. government and OWI during WWII. Grade Level: 7-12 Standards: History Thinking Standard 2—the student comprehends a variety of historical sources and appreciates historical perspectives as revealed through the arts. Content Era 8 (1929-1945) Standard 3C—the student understands the effects of the war at home. Time Requirement: One class period. Download a printable pdf version of this lesson plan Directions: 1. Types of Propaganda SheetPoster Analysis SheetStudent Worksheets 2. 3. 4. Assessment: Enrichment: Poster Gallery for Discussion: 1. 2. 3. 4. 5. 6. 7. 8. 9. 10. About the Posters

Intro to WW2 Lesson Plans Lesson Plans NEH Summer Institute at Ashland University Sunday, July 23 to Saturday, August 5, 2006 About | Sponsors | Faculty | Program Site | Lesson Plans In summer 2006, 28 teachers attended the National Endowment for the Humanities Summer Institute “Churchill and America” co-sponsored by The Churchill Centre, Washington, D.C. and the Ashbrook Center for Public Affairs in Ashland, Ohio. These lessons are the personal responses of teachers who attended the Institute. Course and Level reflect the audience teachers had in mind when planning their lessons. The Path to World War IIThe “Wooing” of America: Winston Churchill and the Strengthening of Anglo-American Relations, 1938-1941 by Robert B.

A Knight in a Medieval Castle | historyvault.ie Culture: Feudal System Philosophy: Code of Chivalry Training of a Knight: PageSquire‘Dubbing Ceremony’ Armour & Weapons: Chain-mailPlate armourhelmetBroad SwordLanceShield Medieval Castle: DrawbridgePortcullisCurtain WallsBattlementsKeepMoatArrow Slits Tournaments: JoustsMelees Pastimes: FalconryHawkingChess Top 10 Battles of World War II History World War II was the bloodiest conflict in human history. The world was in a state of “total war.” Motivated by the threat of global tyranny, the Allies eventually prevailed, but this victory was marked by battles won and lost. This list looks at ten battles that decisively changed the course of the war. Battles are ranked based on what was at stake, and the effect they had on the war as a whole. After the German conquest of Poland in September 1939, Hitler turned his attention to the west. The German Army was actually outnumbered by the Allies. By the summer of 1944, the Red Army was at Germany’s doorstep. Operation Overlord commenced with the Normandy landings in June of 1944. Up until August 1942, the Allies had been on the defensive in the Pacific Theatre. On 7 August, 11,000 Marines of the 1st Marine Division under the command of Major General Alexander Vandergrift landed on Guadalcanal. For the first time, the Germans retreated on a large scale.

Lesson Plans: My Dear Little Boys: A Letter Home from War "My Dear Little Boys…" Interpreting a Letter Home from the War Letters written by soldiers in World War II to family, loved ones, and friends were a lifeline between the writer and those on the Home Front. By carefully reading these letters, students can learn about the experiences of war, and the emotions, fears, and desires of soldiers away from home, enriching their understanding of historical sources, war, and human relations. Objective:Students will analyze an individual soldier’s feelings about World War II and in turn learn how to use letters as a primary source for research. Grade Level: 7-12 Standards: History Thinking Standard 2— the student comprehends a variety of historical sources and can reconstruct the literal meaning of a historical passage and identify its central message. Content Era 8 (1929-1945), Standard 3B—the student understands World War II and how the Allies prevailed. Time Requirement: One class period, and possible homework assignment. Directions: 1. 2. 3. 4. 5.

WWI End Leads to World War II "The Peace Treaty of Versailles: This is not Peace. It is an Armistice for twenty years." -- Foch Neither side was defeated in The Great War. With the entry of the United States on the side of the Allies, the German side saw that victory was not possible and sought a mutual end to the fighting. Germany applied directly to President Wilson by agreeing to accept his Fourteen Points for Peace. The Allies considered themselves victors and wished to punish Germany for the years of war and to make them pay for what had been suffered and for the millions of lives lost. Wilson stressed Fourteen Points of self determination which violated established principles of European politics. Just as no one won the war, so too, no one won the peace. All European participants lost a generation of young men. Concerning the Pacific Japan entered the war on the allied side with the goal to conquer the German colony of Kiaochow in China.

Operation Overlord Preparations for D-Day[edit] The decision to undertake a cross-channel invasion within the next year was taken at the Trident Conference in Washington in May 1943. Churchill favoured making the main Allied thrust into Germany from the Mediterranean theatre, but was over-ruled by his American allies, who were providing the bulk of the men and equipment. British Lieutenant-General Frederick E. Morgan was appointed Chief of Staff, Supreme Allied Commander (COSSAC) to begin detailed planning. The initial plans were constrained by the number of available landing craft, most of which were already committed in the Mediterranean and Pacific. The Pas de Calais is the closest point in continental Europe from Britain and was the location of launch sites for V-1 and V-2 rockets, which were still under development. Allied invasion plan[edit] D-day assault routes into Normandy "Overlord" was the name assigned to the establishment of a large-scale lodgement on the Continent. Reconnaissance[edit]

Lesson Plans The Museum has created these Lesson Plans that you may print out for your classroom use. Each lesson comes complete with directions, enrichment suggestions, and reproducible handouts and incorporate primary sources. Most lessons can be modified for middle or high school level. Some Preliminary Considerations: Guidelines to consider before teaching about WWII The National WWII Museum & The Common Core: How the Museum's lesson plans meet Common Core Standards Key: The European and Pacific Theaters The Home Front WWII Overview Please help us improve our lessons! Fill out and submit an Online Lesson Plan Evaluation Form