An experiment in game design and teaching 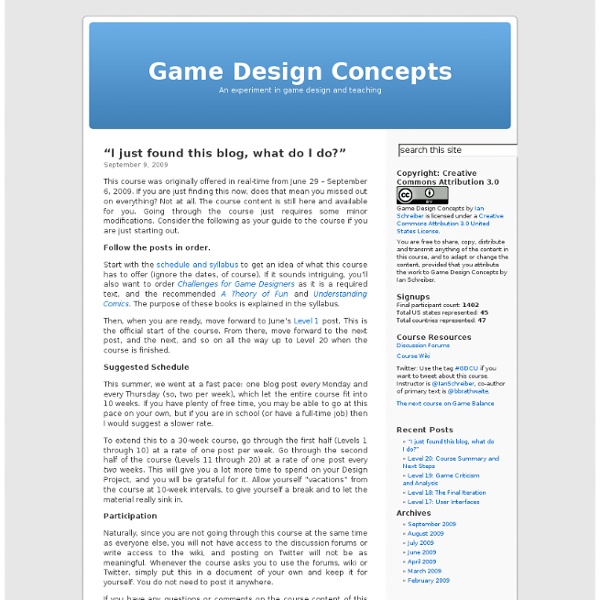 The 4 Keys 2 Fun | Nicole Lazzaro's Blog Emotion and the Fun of Games As experts in player experiences we see a huge gap between “market research” and what players most enjoy about play. Players may check “good graphics” on a online survey, but our cross-genre contextual research reveals a more interesting story. We know how games deliver more emotions than frustration, excitement, and fear. The secret is in the gameplay. The 4 Fun Keys create games’ four most important emotions 1. Hard Fun: Fiero – in the moment personal triumph over adversity 2. These four main reasons why people play games are how best sellers create more emotions for more captivating play. Nicole Lazzaro, President, of XEODesign,® Inc. has shared the insights and analysis from XEODesign’s independent player research with the game development and human-computer interaction communities. The 4 Fun Keys create emotion from interaction in productivity software as well as games.

I Have No Words & I Must Design This article was published in 1994 in Interactive Fantasy #2, a British roleplaying journal. A more recent version of the piece may be found here. There's a lotta different kinds of games out there. A helluva lot. Cart-based, computer, CD-ROM, network, arcade, PBM, PBEM, mass-market adult, wargames, card games, tabletop RPGs, LARPs, freeforms. But do these things have anything at all in common? Well, we can all do the latter: "Good game, Joe," you say, as you leap the net. As game designers, we need a way to analyze games, to try to understand them, and to understand what works and what makes them interesting. We need a critical language. What Is a Game, Anyhow? It's Not a Puzzle. In The Art of Computer Game Design, Chris Crawford contrasts what he call "games" with "puzzles." Some puzzles are obviously so; no one would call a crossword a "game." A puzzle is static. It's Not a Toy. According to Will Wright, his Sim City is not a game at all, but a toy. Just so Sim City. It's Not a Story.

SCVNGR's Secret Game Mechanics Playdeck Some companies keep a playbook of product tips, tricks and trade secrets. Zynga has an internal playbook, for instance, that is a collection of “concepts, techniques, know-how and best practices for developing successful and distinctive social games”. Zynga’s playbook has entered the realm of legend and was even the subject of a lawsuit. SCVNGR, which makes a mobile game with real-world challenges, has a playdeck. It is a deck of cards listing nearly 50 different game mechanics that can be mixed and matched to create the foundation for different types of games. I’ve republished the accompanying document below, which should be interesting to anybody trying to inject a gaming dimension into their products. Rght now, that should be a lot of people. SCVNGR’s playdeck tries to break down the game mechanics into their constituent parts. SCVNGR Game Dynamics Playdeck 1. Definition: A virtual or physical representation of having accomplished something. 2. 3. 4. 5. 6. 7. 8. 9. 10. 11. 12. 13. 14.

Pixel Art Tutorial Meta-Game Design: Reward Systems that Drive Engagement One of the hottest topics in the Web-meets-Gaming world is metagame design -- the practice of applying game-like reward and feedback systems to non-game applications for the purpose of driving loyalty and engagement. In the physical world, we're surrounded by metagames: Karate belts, scout badges, employee incentive plans, and frequent flyer miles are all reward systems, layered onto an existing activity to drive loyalty and communicate social status. On the Web, metagames peform a similar function. Social networks like MyYearBook and Hi5 let players earn redeemable points by logging in and engaging in various social activities. Foursquare uses points, badges and leaderboards to turn club-hopping into a game-like social experience. In this design-focused talk, you'll learn about the three levels of metagame design -- points tables, feedback and rewards, and viral outreach -- and the key questions to answer at each level.

Effectively Organize Your Game’s Development With a Game Design Document Have you ever dived right in to developing a game, but found yourself having to constantly change aspects of the design or the gameplay due to a lack of planning? You should consider using a game design document: a guiding vision of the game as a whole, pulling together ideas and plans for the design, development, and business sides of your game. Introduction To put it simply: we like to tell stories. Some true, some not so much. But the point is that we have been crafting tales for a very long time, and as time went by these tales began to evolve, becoming more complex, with richer details, with more and more fantastic backgrounds and appealing plots. And as the stories grew in complexity, so did the tools used in their making. Although video games were first just about getting the highest score possible when faced with a determined task, developers soon realized the endless possibilities laying ahead of them. A GDD is a tool that helps merging the components of a game together. Art

Game mechanics Game mechanics are constructs of rules intended to produce a game or gameplay. All games use mechanics; however, theories and styles differ as to their ultimate importance to the game. In general, the process and study of game design, or ludology, are efforts to come up with game mechanics that allow for people playing a game to have an engaging, but not necessarily fun, experience. Game mechanics vs. gameplay[edit] Gameplay refers to the overall game experience or essence of the game itself. There is some confusion as to the difference between game mechanics and gameplay. For example, the basic gameplay of a shooting or fighting game is to hit while not being hit. However, from a programming or overall design perspective, basic gameplay can be deconstructed further to reveal constituent game mechanics. Game mechanics vs. theme[edit] Games that are mechanically similar can vary widely in theme. Turns[edit] Even in real-time computer games there are often certain periodic effects.

Level 1: Intro to Game Balance « Game Balance Concepts Class Announcements I have to admit I was a little surprised to see that people were still signing up for the paid course after it started, but I suppose it’s common enough for people to join a class early in the term. However, to be fair to those who signed up well in advance, I’ll be closing signups this Sunday (July 10) at midnight EDT. So, if you haven’t signed up and still want in, make sure to click the Paypal link before then! Readings/Playings If you haven’t already, you should watch the intro video for this course first, before reading on. This Week’s Topic This week is probably going to start a bit slow for those of you who are experienced game designers (or those who are hoping to dive deep into the details). You can think of this week like a tutorial level. What is Game Balance? I would start by asking the question “what is game balance?” This immediately brings up the question: what if a game doesn’t have any numbers or math involved? How do you tell if a game is balanced?