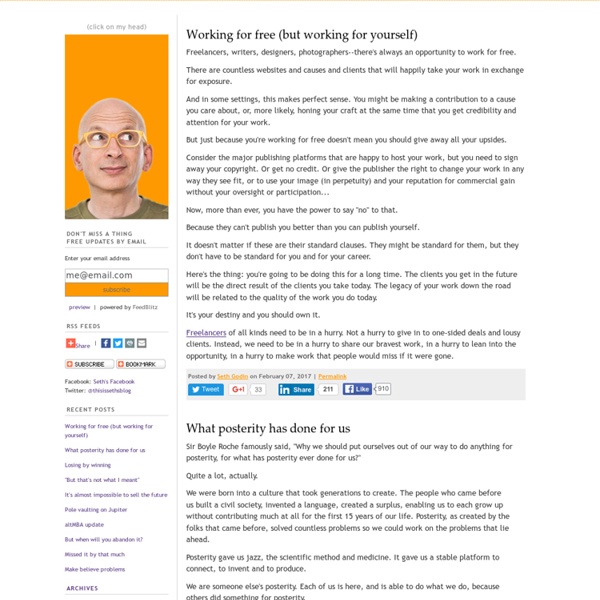 We still teach a lot of myths in the intro to economics course, myths that spill over to conventional wisdom. Human beings make rational decisions in our considered long-term best interest. Actually, behavioral economics shows us that people almost never do this. Our decision-making systems are unpredictable, buggy and often wrong. We are easily distracted, and even more easily conned. Every time we assume that people are profit-seeking, independent, rational actors, we've made a mistake. The free market is free. The free market only works because it has boundaries, rules and methods of enforcement. Profit is a good way to demonstrate the creation of value. In fact, it's a pretty lousy method. Profit is often a measure of short-term imbalances or pricing power, not value. I hope we can agree that a caring nurse in the pediatric oncology ward adds more value than a well-paid cosmetic plastic surgeon doing augmentations. The best way to measure value created is to measure value, not profit.

AgencySpy - Inside Your Agency. Deep Inside Bicoastal Arcade Edit has strengthened its roster with the addition of editors Jen Dean and Mark Paiva. Dean joins Arcade Edit from Whitehouse Post, where since 2011 she has honed her skills for brands including Google, New York Times, Cotton, BMW, TJ Maxx and Sprint. She began her commercial editing career under Hank Corwin (Natural Born Killers, Tree of Life) at Lost Planet, where spent almost 12 years. Dean discovered her love of film while studying under legendary experimental filmmaker Stan Brakhage at the University of Colorado. Paiva joins Arcade Edit with over 10 years of experience. Last year alone he worked with agencies including 180 Amsterdam, Droga5, The Corner and Wieden+Kennedy. First, ten This, in two words, is the secret of the new marketing. Find ten people. Ten people who trust you/respect you/need you/listen to you... Those ten people need what you have to sell, or want it. And if they love it, you win. If they love it, they'll each find you ten more people (or a hundred or a thousand or, perhaps, just three).

25 Cool and Creative MacBook Stickers As much as I hate Apple and their often overpriced hardware, I do admit that their products look beautiful and can be used just like jewelry to make you look better. Heck, one of my friends even put an Apple logo sticker on her Dell laptop! *insert a facepalm image here* However, with more and more people getting Macs these days it’s getting harder to stand out of the crowd. Information & Advice Blog The UK economy is recovering from the deepest recession since the Second World War and this recovery has been slower than forecast. According to the latest figures from The Ofﬁce for Budget Responsibility, the economy is predicted to shrink by 0.1 per cent in 2012. Chancellor George Osborne used his Autumn Statement , delivered last Wednesday, to announce a one year extension of the "era of austerity" to 2017-18. More bad news is promised in the spring as yet further cuts are set to be announced in the Spending Review, which has been brought forward to next year. This is a bleak prognosis and it would be foolish not to expect LIS professionals working in all parts of the economy to feel the chill. But first for some of the potentially good news.

Sallie Krawcheck Should We Care About Diversity This post originally appeared on LinkedIn. Follow Sallie on LinkedIn Ok, I admit it. In the wake of the Ann Marie Slaughter “Atlantic” article and its re-ignition of the “women having it all” discussion, I asked myself whether debating this issue is a luxury of the overprivileged. How Green Affiliate Marketing Can Grow Your Sustainable Business Warren Fligg is the Founder of Performance-Based.com, a niche green affiliate marketing network that serves organic, fair trade green merchants and retailers. Warren is a veteran affiliate marketing professional whose experience in Internet marketing goes back to the 1990s. Warren launched his green business in response to an “Aha!” moment that came with the pending arrival of baby number one. When he and his wife were cleaning the room that they intended to turn into their nursery, they felt sickened by the toxic chemicals in their cleaning products, and realized that the ingredients in their everyday cleaning products were most likely harmful to their soon-to-arrive baby, their pet, and themselves. Warren then decided to start an affiliate network that would help promote eco-friendly products and businesses.

Perfect Summer Bangle Here's a fun tutorial on how to make a message bangle that's one-of-a-kind, done in the sun, waterproof and weatherproof. Even after several trips to the beach, it won't fade or wash off! Essentially, it's the Perfect Summer Bangle. Used in this tutorial: Inkodye Red Prepare. I want to The issue of backups is always an important one, but something we so often ignore, right up until the moment has passed and it's too late. I have backed up important material onto discs in the past (both CD and DVD), and I have also got data backed up onto several external hard drives. You should also make sure that one of your backups is off site - the distance that I once saw was something like 'double the wing span of a crashed aircraft on your house' which is rather dramatic, but not a figure that you'll forget. Obviously the best place to backup to these days is into the Cloud, and after having a look around I've chosen to go with SquirrelSave which claims to be the UK's #1 service. It's a commercial offering, costing around £60 a year, but it's all automated and works entirely in the background, which is exactly what I wanted. I also have an unlimited amount of space, which is just as well, given that I'm backing up rather a lot.

Marketing to Hispanics Univision is rolling out TheLaFlama.com, an English-language video channel aimed at 15- to 30-year-old Hispanic Millennials. Ad agency Sensis and ThinkNow Research have launched a new study on Latino Millennials. Titled "The Hispanic Millennial Project," the initiative takes a 360-degree look at this important demographic and their older Hispanic brethren. Both companies specialize in cross-cultural subjects.

Low Hanging Passive Income Idea Fruit I was recently asked what my process was at the beginning of my niche marketing career. My answer: “I just threw shit at the wall and saw what stuck”. One of the greatest advantages for new internet marketers is their inexperience. They don’t know what works and what doesn’t so they have to feel their way through it. That means trying lots of things and, if you stick with it long enough, carving out your own specialty or niche that hasn’t been exploited by someone else yet. My early success actually revolved around micro coupon niche sites targeting a very small segment of the “deals” market.