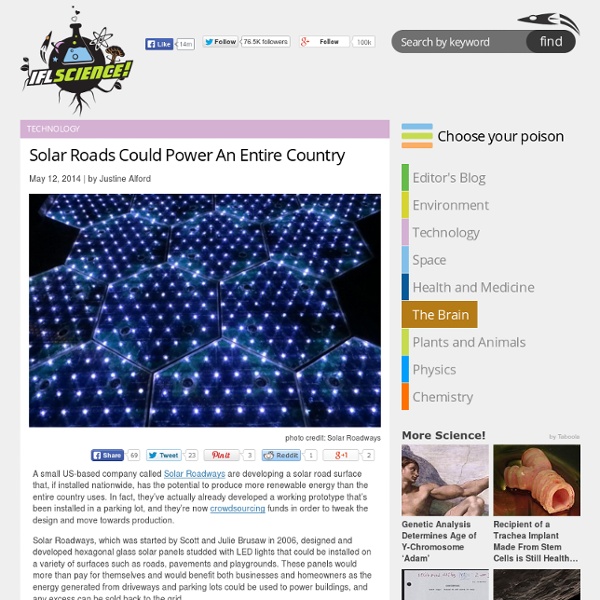 A small US-based company called Solar Roadways are developing a solar road surface that, if installed nationwide, has the potential to produce more renewable energy than the entire country uses. In fact, they’ve actually already developed a working prototype that’s been installed in a parking lot, and they’re now crowdsourcing funds in order to tweak the design and move towards production. Solar Roadways, which was started by Scott and Julie Brusaw in 2006, designed and developed hexagonal glass solar panels studded with LED lights that could be installed on a variety of surfaces such as roads, pavements and playgrounds. These panels would more than pay for themselves and would benefit both businesses and homeowners as the energy generated from driveways and parking lots could be used to power buildings, and any excess can be sold back to the grid. Snow test: the powered row of panels are free of snow/ice. Image credit: Solar Roadways. Obviously, this project isn’t going to be cheap.

Related:  science and beyond • Science • Energy

The Spice That Prevents Fluoride From Destroying Your Brain Fluoride is found everywhere today, from antibiotics to drinking water, no stick pans to toothpaste, making exposure inevitable. All the more reason why new research proving this common spice can prevent fluoride damage is so promising! Fluoride’s neurotoxicity has been the subject of academic debate for decades, and now a matter of increasingly impassioned controversy among the general public, as well. Kirlian Energy Fields Radiation Fields - Energy Fields - Reflected Zones The human energy field is thought to contain information that relates to all the activity going on within and around the person. The human aura or light body is invisible because our eyes only respond to a band of wavelengths called the visible spectrum and as the aura lies outside of this most people are unable to see it with the naked eye. However throughout history many seers and sensitive’s have claimed to see this aura surrounding people. From their accounts it has been reported that disturbances or dis-ease within the individual shows itself as distortions or anomalies within the aura.

'Artificial Leaf' Reaches Best Level Of Solar Energy Efficiency Yet Humans have been struggling for years to create clean, renewable energy that doesn't decimate the planet. What's even more infuriating is that plants, waving gently in the breeze all the while, have been creating 'green' energy before mankind even existed. During plant photosynthesis, water and carbon dioxide is turned into glucose and oxygen. Recently, mankind has been trying to learn from plants to produce our own clean, green machines – in this case, artificial leaves. The latest advancement in the artificial leaf comes from Monash University in Melbourne and brings us another step closer to a commercially viable method of turning water into fuel.

Data Storage in Crystal Quartz will change Everything! You know how much I LOVE talking about new technology, right? Well, this is one that is going to blow your mind, make an excellent case for the Crystal Movement, and also mop the floor with “limited data storage” forever! There’s a new kind of storage device which many tech companies have been diving into in secret for the past few years, which Hitachi recently came out with a technology they are developing which is essentially a sheet of Quartz Glass, which could potentially save data up to 300 Million Years! If you didn’t know anything about storage devices that we currently have, but anything from records, CD’s, USB sticks, magnetic tape, none of these can even lay a finger on this new, very impressive technology. "The prototype is made of a square of quartz two centimeters wide and two millimeters thick. It houses four layers of dots that are created with a femtosecond laser, which produces extremely short pulses of light.

New Physics Formula Links Quantum Mechanics And Pure Math The notorious number Pi has succeeded in becoming even more prevalent in science. Researchers from the University of Rochester discovered that a formula which approximates the energy levels of a hydrogen atom is the same as the one developed 360 years ago by English mathematician John Wallis to find the value of Pi. The pair of physicists realized that when the variational method was employed to calculate the energy levels of the hydrogen atoms, the formula could be simplified into the Wallis Product, the one used for Pi.

Caltech Team Announces Their Creation Of The Artificial Leaf, Part ITrending Solar energy is the perfect energy source, except for one thing: you can’t store it, at least, you couldn’t until now. Five years ago Caltech established the Joint Center for Artificial Photosynthesis (JCAP) along with its partnering institution the U.S. Department of Energy’s Energy Innovation Hub with one goal: creating a cost-effective system that, like plants, uses only sunlight, water, and carbon dioxide to create storable energy. Over the past five years, JCAP researchers at have made major advances toward this goal, and yesterday they reported that they have, in fact, created the first complete, efficient, safe, integrated solar-driven system for splitting water to create hydrogen fuel. Chengxiang Xiang and Erik Verlage, JCAP team members, assemble part of the artificial leaf.

Scientists Just Created Crystals That Make Breathing Underwater A Possibility Danish scientists are a step closer to significantly helping people who suffer from respiratory ailments, thanks to a revolutionary new absorption crystal. Working out of the University of Southern Denmark, the group has uncovered crystalline materials which are capable of pulling oxygen out of both air and water, a discovery which could eventually mark the end of the need to carry around cumbersome oxygen tanks. The revolutionary crystalline material can bind and store oxygen in high concentrations, then control its release time depending on what the user needs. This new discovery could even benefit deep sea divers, giving them superhero-like abilities to stay submerged for extended periods of time without an air tank. The standard human body can function with only 21% oxygen in the air around us, but about when we need it in higher concentrations?

Scientists Create Solid Light On a late summer afternoon it can seem like sunlight has turned to honey, but could liquid—or even solid—light be more than a piece of poetry? Princeton University electrical engineers say not only is it possible, they’ve already made it happen. In Physical Review X, the researchers reveal that they have locked individual photons together so that they become like a solid object. "It's something that we have never seen before," says Dr. The World's First Solar-Powered Sports Car Could Drive Forever Can a road-legal car be powered by the Sun alone? One company thinks so, and they’re planning to unveil a scaled-down version of their proposal later this year. Called “The Immortus,” the two-person vehicle is the work of EVX Ventures, an electric vehicle technology startup based in Melbourne, Australia. The car is decked out in solar panels, covering up to eight square meters (86 square feet), and also has a lithium battery to store energy, between five and 10 kilowatt-hours. So light is the car though, 500 kilograms (1,100 pounds) when empty and 700 kilograms (1,550 pounds) when fully laden, it is able to run on just solar power alone.

Human Cells have Electric Fields as Powerful as Lighting Bolts -A Galaxy Insight Using newly developed voltage-sensitive nanoparticles, researchers have found that the previously unknown electric fields inside of cells are as strong, or stronger, as those produced in lightning bolts. Previously, it has only been possible to measure electric fields across cell membranes, not within the main bulk of cells, so scientists didn't even know cells had an internal electric field. This discovery is a surprising twist for cell researchers.

7 Incredible Inventions by Teenage Wunderkinds When many of us were in our teens, work for science fairs comprised cut and paste displays on colorful presentation boards, and our hobbies weren't exactly about to change the world. But across the globe, teenagers with creative, scientific minds are already devising extraordinary devices, revolutionary materials and renewable technologies that might just change our planet for the greener. Click through to see some of their most incredible inventions - from bioplastics made from bananas to pee-powered energy generators and an ocean cleanup array to rid the world's oceans of waste. An Ocean Clean Up Array to Remove 7,250,000 Tons of Plastic From the World’s Oceans When we first covered Boyan Slat’s Ocean Cleanup Array it generated a phenomenal amount of excitement, as well as debate. The 19-year-old Dutch aerospace engineering student devised the array to be dispatched to the world’s garbage patches, with an initial estimate the the oceans could be cleaned up in around 5 years.

Flowers get an electrifying buzz out of visiting bees - life - 21 February 2013 Plants could turn out to be one of the more chatty organisms. Recent studies have shown they can communicate with a surprising range of cues. Now it turns out they could be sending out electrical signals, too. As they fly through the air, bees – like all insects – acquire a positive electric charge. Flowers, on the other hand, are grounded and so have a negative charge.

New wonder drug matches and kills all kinds of cancer — human testing starts 2014 Stanford researchers are on track to begin human trials of a potentially potent new weapon against cancer, and would-be participants are flooding in following the Post’s initial report on the discovery. The progress comes just two months after the groundbreaking study by Dr Irv Weissman, who developed an antibody that breaks down a cancer’s defense mechanisms in the body. A protein called CD47 tells the body not to “eat” the cancer, but the antibody developed by Dr Weissman blocks CD47 and frees up immune cells called macrophages — which can then engulf the deadly cells.