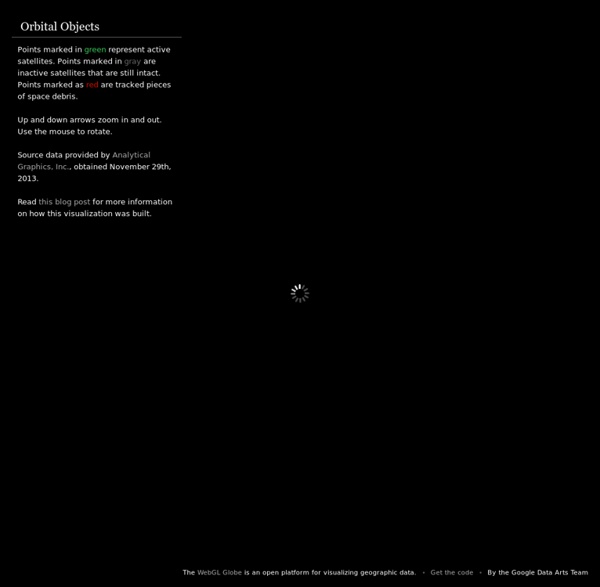 Big Data Is Teaching Us About the Nighttime Migrations of Birds, by M.R. O'Connor In Ithaca, New York, a virtual machine in a laboratory at the Cornell Lab of Ornithology sits in the night, humming. The machine’s name is Bubo, after the genus for horned owls. About every five minutes, Bubo grabs an image from Northeast weather radar stations, and feeds it through a pipeline of artificial-intelligence algorithms. What does this radar image show me? Bubo asks.

Interactive Panorama Lets You Stand on the Moon With Neil Armstrong Though 12 men have walked on the moon, only one could be the first. When Neil Armstrong, who died Aug. 25, touched down in 1969 on the lunar surface, he and fellow astronaut Buzz Aldrin made history and photographed their landing site in detail. This fitting panoramic tribute transports you to the Apollo 11 landing site and lets you see what Armstrong saw. Stitching together photographs taken by Armstrong himself, the full 360-degree view shows the flat volcanic regolith where the Apollo Lunar Module landed. Aldrin unloads material for seismology experiments in the background. Best viewed in full-screen mode, the panorama lets you take control, panning and zooming across the landscape.

Si la Luna fuera un pixel - Un mapa aburridamente exacto del sistema solar Mercury Venus Earth You Are Here Moon The Political Controversy of Wikipedia Science Articles - Pacific Standard Whether you like it or not, Wikipedia has become the de facto source when you want fast access to information on, well, just about anything. Some studies suggest Wikipedia is generally a pretty reliable source of information. But new research suggests that even if Wikipedia is usually reliable, disputes over politically controversial science pages could prevent users from getting the facts they need. "As our society turns to Wikipedia as a primary source of scientific information, it is vital we read it critically and with the understanding that the content is dynamic and vulnerable to vandalism and other shenanigans," ecologists Adam Wilson and Gene Likens write in PLoS One. Likens has something of a personal stake in this. He was among the first scientists to study acid rain and its link to air pollution, and he won the National Medal of Science in 2001 for his research.

Slingshot Instructions: (after you've read these, click here to get a bigger picture.) Click and drag the arrow to change the direction of launch of the spaceship. Choose Jupiter's path distance (the shortest distance of the initial launch point from Jupiter's orbital path) and initial speed of the spaceship. RESET: puts Jupiter into ready position at far left

Atomic Summer: An Essay by Joni Tevis Operation Teapot, the Met Shot, a tower burst weapons effects test April 15, 1955 at the Nevada Test Site. Photo via Wikimedia Commons Joni Tevis | The World Is On Fire: Scrap, Treasure, and Songs of Apocalypse | Milkweed Editions | May 2015 | 28 minutes (7,494 words) Below is Joni Tevis’s essay “Damn Cold in February: Buddy Holly, View-Master, and the A-Bomb,” from her book The World Is On Fire, as recommended by Longreads contributing editor Dana Snitzky. This essay originally appeared in The Diagram. Daylight Hours Explorer Shows the hours of daylight received during the year for an observer at a given latitude. This is an important factor contributing to the seasons. Running this animation on your computer... right-click to download daylighthoursexplorer.swf and daylighthoursexplorer.html to the same directory open the html file in a browser to run the animation

Our Sun Came Late to the Milky Way’s Star-Birth Party This graphic shows the evolutionary sequence in the growth of massive elliptical galaxies over 13 billion years, as gleaned from space-based and ground-based telescopic observations. The growth of this class of galaxies is quickly driven by rapid star formation and mergers with other galaxies. Credits: NASA/ESA/Niels Bohr Institute/STScI How Radio Enthusiasts Are Listening to Earth’s Secret Symphony Stephen McGreevy looked nervously at the sky. Outside his camper van in Nevada’s Black Rock Desert, angry black clouds gathered on the horizon as 30-mile-per-hour winds whipped across the flat expanse. At his feet, an array of copper wire—hundreds of feet of it—writhed like snakes.

Earthprints: Andasol solar power station On a barren, sun-baked plateau in southern Spain, row upon row of gleaming mirrors form one of the world's biggest solar power plants and harness the sun's power even after dark. Near the town of Guadix, where summer temperatures often top 40 degrees Celsius, the main sound at the site is a whirring of motors to keep the mirrors - mounted on giant steel frames - tracking the sun as the Earth turns. There is little sign of life here, at an altitude of 1,100 meters near the snow-capped Sierra Nevada range. Some hardy red and yellow flowers grow around the fringes, a few pigeons flap past and workers say that the odd fox lopes by at night. Her Code Got Humans on the Moon—And Invented Software Itself Margaret Hamilton wasn’t supposed to invent the modern concept of software and land men on the moon. It was 1960, not a time when women were encouraged to seek out high-powered technical work. Hamilton, a 24-year-old with an undergrad degree in mathematics, had gotten a job as a programmer at MIT, and the plan was for her to support her husband through his three-year stint at Harvard Law. After that, it would be her turn—she wanted a graduate degree in math. But the Apollo space program came along. And Hamilton stayed in the lab to lead an epic feat of engineering that would help change the future of what was humanly—and digitally—possible.

Why the Great Glitch of July 8th Should Scare You — The Message Over at Fusion, Felix Salmon tells folk to chill out over The Great Technical Glitch of July 8, 2015 when a computer glitch grounded all mainland United flights, the NYSE went down for the day, and the website of the Wall Street Journal was down, too. All this came one day after a huge drop in Chinese stocks. Felix says: Don’t be scared. Don’t even be worried. He explains that, heck, the whole United fleet was grounded last month too, and that NYSE is one stock exchange among many. Earth - Your life on earth Explore BBC Earth's unique interactive, personalised just to you. Find out how, since the date of your birth, your life has progressed; including how many times your heart has beaten, and how far you have travelled through space. Investigate how the world around you has changed since you've been alive; from the amount the sea has risen, and the tectonic plates have moved, to the number of earthquakes and volcanoes that have erupted.