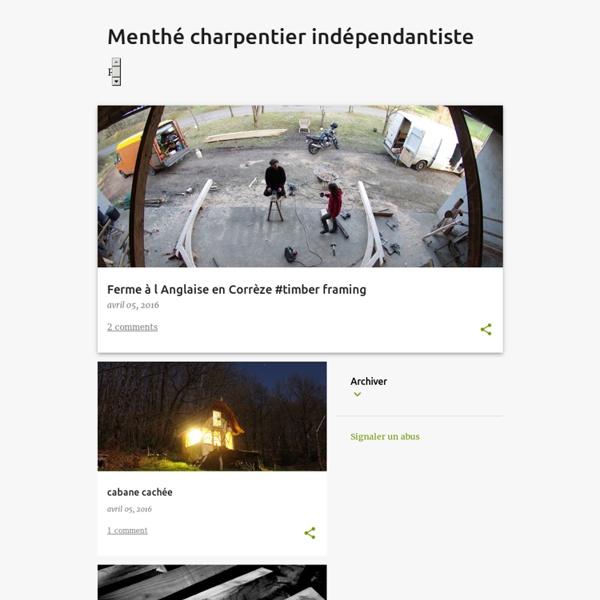 Japanese House Built by Off Grid Champion - Brian Schulz The Japanese Forest House is a confluence of my love of small spaces, my passion for local materials, and my fascination with tradtional Japanese architecture. For those familiar with the intensely refined art of traditional Japanese carpentry, applying the title of 'Japanese' onto my house might be laying it on a bit thick. It's true I've fallen short of the refinement found in the homes of the upper classes, however, the work still embraces the design principles that make the traditonal tea houses (which were, ironically, modeled after peasant shacks) so appealing. Oversized beams, live edge slabs, natural timbers, real plaster walls, and minimal decoration, all encourage a deep sense of calm. What I love about this structure is that it is architecturally honest, meaning that where a lag bolt or a deck screw or a 16 penny nail was used, no attempt to was made to conceal them.

Cozy Outdoor Fireplace Hut is a Warm Glowing Play Place This artful outdoor fireplace from Haugen/Zohar Architects is integrated with a nearby playground, allowing families a chance to duck in and take the chill out of a cool evening playtime. The fireplace, built on a playground in Trondheim, Norway, is a wonderfully whimsical structure that provides a place not only to warm up, but to spend time telling stories. Its unique shape is reminiscent of traditional Norwegian turf structures, with a hole at the top for the smoke to escape. A concrete base provides a seating area all around the fire, encouraging bonding over scary stories or tall tales. The architects, faced with an extremely limited budget, found an inexpensive building material at a nearby construction site.

Super modern South African tiny house is bright and green I have often complained that a lot of tiny houses, being modelled on larger houses that get the shrink-ray, are designed for cuteness instead of practicality, with their tiny lofts that peak in the middle. Perhaps instead of using a traditional house as a model, designers should be looking more at learning from more modern designs like Airstream trailers or boats. That's why the INDAWO / lifePOD is so interesting. © Brett Rubin The INDAWO / lifePOD is a lifestyle and design intervention that affords home owners a comfortable, functional experience inside a small space; to live in confluence with the needs of the planet now and in the future .... “Living smaller will save you money in the long run; it could also make you happier.” The climate is warm enough that the designers can make great use of the outdoors and bring in all that natural light. © Pod Indawo

Cave man of the Blue Mountains: Lionell Buckett's ecological creation Could not load plugins: File not found Cave dweller in the mountains Stunning drone footage of Lionel Buckett's cave home at the base of Mount Tomah in the Blue Mountains. There are cave dwellers in the Blue Mountains. The oldest rocks in the range were formed from marine sediments deposited some 400 million years ago. Just visible in a cliff face a few kilometres from the botanic gardens at the base of Mt Tomah, it has world heritage views of Mount Wilson and rain forest. The cave's "passive solar design" makes it warm in winter and cool in summer. The cave well suits his sustainable approach with very little excavation required. "I came across it when I was bush walking," he said. The area is heavy with history with evidence of Aboriginal presence including a carving of a kangaroo and an etching of a woman giving birth. Lionel Buckett has designed and built a cave house on his property in Berambing in the Blue Mountains.

Slumtube: Affordable Housing Made From Shipping Pallets! Remember the efficient and affordable Pallet House from last spring? Well designers Andreas Claus Schnetzer and Pils Gregor have bested their original design with an even lower-cost shipping pallet home that was completed this year in South Africa. The 'Slumtube' utilizes discarded pallets along with other local materials like clay and straw to make an insulated and affordable home that can withstand the extremely hot and cold temperatures of Johannesburg. Schnetzer and Gregor built upon what they learned from constructing modular pallet houses, improving upon their original design to make it even more affordable. In previous designs, the pallets were used as floors, walls, ceilings and cladding, but they required sturdy wood beams, which were the most expensive part of the home. The new round design eliminates some of these expensive beams, but it’s still designed and built to European standards for structural soundness. + PalettenHaus Images © PalettenHaus

A home on wheels: 15 converted buses we love Inside the 1978 Bluebird Bus. Photo: Ralph Barrera As property prices soar around the globe, people are being forced to think outside the square when it comes to where they live. Tiny houses are becoming increasingly popular, and a new sub-category of this movement is gaining popularity: the converted bus. Generally speaking, Australians are yet to embrace the converted bus option. But that shouldn't stop us marvelling at these wonderfully creative mobile homes. Advertisement The Thompson's Yellow School Bus It took nearly four years for Myra and Jeremy Thompson to turn this 11.3-metre school bus but into a fairy-cottage-inspired home. They used plenty of reclaimed materials in the build, with Douglas fir flooring, cedar shingles on the exterior, and wood from an old house for the ceiling. The couple scoured flea markets and garage sales for many of the decorative items, such as the boxes that double as open shelving. Images: courtesy Leah at Image: statesman.com

Ex-Masterchef's Kathryn Minchew to open a restaurant in her garden SHED A former Masterchef contestant has been given the green light to open what will be one of the world’s smallest restaurants - in her own garden shed. Kathryn Minchew, 32, set up Gloucester Studio in a purpose-built hut in her Cotswolds garden 14 months ago, after reaching the semi-finals of the BBC1 cooking competition in 2008. She was given six months to see if the culinary business would work, beginning in January 2015, and says she had a great response from diners - despite the restaurant only being available for 'exclusive hire'. Scroll down for video Former Masterchef contestant Kathryn Minchew, 32, has set up a restaurant in her back garden in Gloucester Gloucester Studio can serve up to eight guests at a time, but with prices starting at £495, it's not cheap Kathryn has now been given permission to run her tiny eaterie in Gloucester as a fully-fledged restaurant, on a pre-booked basis for no more than eight diners at a time. Former Masterchef semi finalist builds her own MasterShed

Steve Areen Builds Perfect Dream Dome Home In Thailand For Less Than $10,000 When most people imagine their dream home, they probably think of a large, sprawling vacation house that cost hundreds of thousands of dollars. When Steve Areen thought about building his dream home, all he had to do was find $9,000 and a place to build. He did just that and, in a few weeks, he had a vacation home in the middle of Thailand that could make anyone drool. In just 6 weeks, Steve was able to create the home of his dreams. With a Thai friend’s guidance, his son-in-law’s masonry skills and a lot of work, the team made progress quickly. Steve was given a place on his friend Hajjar Gibran’s mango grove to build his home. The basic structure only cost about $6,000. In Thailand, materials are cheaper, but it’s still mind blowing to know just how little this cost to make. The extra details and furnishings of the home brought the cost up another $3,000. Totaling approximately $9,000 for the entire home. It took elbow grease and dedication. But it seems so worth it. Can I go here right now?

Custom Living Tiny Home A custom tiny home built by Tiny Living Homes in Delta, British Columbia, Canada. Weaving a home.. how one woman can help millions of people globally A sustainable tent that collects rainwater, folds up for easy transport and stores solar energy? Sounds visionary, right? But this is the invention of Jordanian-Canadian architect, designer and artist Abeer Seikaly. [IMAGE: Abeer Seikaly] Abeer Seikaly designed these amazing multipurpose tents with refugees in mind, people who have been displaced by global and civil war, climate change and more. Inspired by elements of nature such as snake skin and traditional cultural aspects such as weaving, nomadic life and tent dwellings, this weather proof, strong but lightweight and mobile fabric tent gives refugees shelter but also a chance to "weave their lives back together". The flexible dual layer tent structure has the ability to close out the cold of winter and wet weather. Solar energy hits the tent fabric and is stored in a battery for use at night providing renewable electricity. For this amazing life changing structure, Seikaly has won the 2013 Lexus Design Award.

Refreshing 480sf Country Cottage With Room To Breathe - Tiny House for UsTiny House for Us This Blanco, Texas, dwelling is a great-looking example of a Kanga Room Systems cabin with all the options. The 480-square-foot house has a 16′ x 30′ footprint and comes with a full-length covered front porch plus an eight-foot screened porch on one side, as well as a complete kitchen and stylish full bathroom. When you don’t feel like hanging out on the porches, a peaked roof and two ceiling fans keep the air circulating during muggy weather. The front porch adds precious square footage that comes in handy on a smaller house like this. Kitchen storage seems to be mostly left up to the occupant rather than built in. Aside from leaving space for the fans, the high ceiling results in standing room in the loft and a living area that’s positively stately. No worries about hitting your head in the spacious sleeping loft. Well chosen tiles and fixtures make for a modern yet traditional bathroom. With its own fan, the screen porch looks like a great place to unwind on hot nights.

the Frank Lloyd Wright School of Architecture | Brittlebush Shelter [ www.taliesin.edu home ] Brittlebush is an experimental desert dwelling for winter residents at the Taliesin West campus of the Frank Lloyd Wright School of Architecture. It was designed and developed by graduate student Simón De Agüero. A steel structure frames three-inch rammed-earth walls surrounding a patio, fireplace and bed. Approximately 90% of the steel in the project was salvaged from the school scrap yard;100% of the earth for the walls was from the school property;100% of the wood used for the formwork was salvaged from onsite renovation waste. Erik Krautbauer, a student in the Bachelor program at the School, was the assistant project manager. The structure can be visited on the student-led Taliesin West Desert Shelter Tour, Saturdays at 1:30, mid-November through mid-April. Photo 2010 Simón De Agüero Photo 2010 Simón De Agüero Simón wishes to acknowledge the following participants in the design and construction of Brittlebush: Special thanks to project supporters: