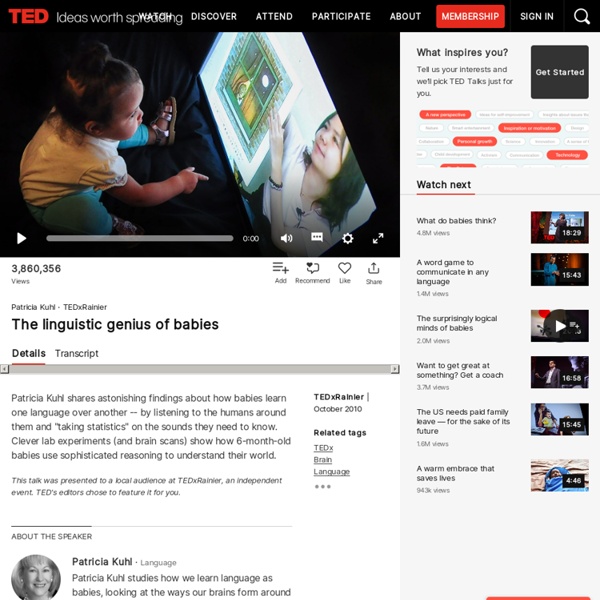 Does being bilingual make you smarter? Language teacher and researcher Miguel Angel Muñoz explains the latest research on how being bilingual affects your brain, ahead of a British Council seminar in Cardiff on whether learning a foreign language makes you smarter. You can watch the live-streamed seminar on Tuesday, 3 June. More than half the world's population uses two or more languages every day It is hard to estimate the exact number of bilingual people in the world, as there is a lack of reliable statistics . But in 2012, a Eurobarometer survey established that 'just over half of Europeans (54%)' are bilingual, and other studies hypothesise that more than half of the world’s population is bilingual.

Back-and-forth exchanges boost children’s brain response to language A landmark 1995 study found that children from higher-income families hear about 30 million more words during their first three years of life than children from lower-income families. This “30-million-word gap” correlates with significant differences in tests of vocabulary, language development, and reading comprehension. MIT cognitive scientists have now found that conversation between an adult and a child appears to change the child’s brain, and that this back-and-forth conversation is actually more critical to language development than the word gap.

Why Movement is Essential in Early Childhood With so few years under their belts, my 3- and 6-year-old daughters are still learning to inhabit their bodies. They are learning how to maneuver themselves physically, how to orient themselves in space. As Vanessa Durand, a pediatrician at St. Christopher’s Hospital for Children in Philadelphia, says, freedom of movement is necessary for children to meet their developmental milestones: “Children learn by experiencing their world using all of their senses.

A few more myths about speakers of multiple languages Does multilingualism cause language delays and identity problems? The British Council's Nayr Ibrahim busts a few more myths about speakers of multiple languages. Myth: Multilingualism causes language delay The long and short of CDK12 Mutations in the BRCA1 and BRCA2 genes pose a serious risk for breast and ovarian cancer because they endanger the genomic stability of a cell by interfering with homologous recombination repair (HR), a key mechanism for accurately repairing harmful double-stranded breaks in DNA. Without the ability to use HR to fix double-stranded breaks, the cell is forced to resort to more error-prone — and thus more cancer-prone — forms of DNA repair. The BRCA1 and BRCA2 genes are not the only genes whose mutations foster tumorigenesis by causing an inability to repair DNA double strand breaks by HR. Mutations in twenty-two genes are known to disrupt HR, giving rise to tumors with what researchers call “BRCAness” characteristics. All but one of these BRCAness genes are known to be directly involved in the HR pathway.

FAQ: Raising Bilingual Children Why want bilingual children? There are many reasons, but the two most common are: 1) The parents speak different languages (say, an American woman and a Turkish man). How young children learn English as another language By Opal Dunn, educational consultant and author Introduction Young children are natural language acquirers; they are self-motivated to pick up language without conscious learning, unlike adolescents and adults. They have the ability to imitate pronunciation and work out the rules for themselves.

Taking Playtime Seriously So part of encouraging play is pulling back on how much programmed goal-directed learning we expect from very young children, to leave them time for the fun of exploration, curiosity and, well, fun. But another important part may be creating environments that foster children’s play and parents’ participation and attention. Dr. Hirsh-Pasek, who is a senior fellow at the Brookings Institution, cited its Learning Landscapes Initiative, which aims to set up learning opportunities in public places where people will encounter them.

Read Early and Often Why Read to Babies? Reading together when babies are as young as 4 months old increases the chances that parents continue reading to babies as they get older. Beginning early is important because the roots of language are developing in a baby’s brain even before he can talk! The more words your baby hears over time, the more words he learns. With these nanoparticles, a simple urine test could diagnose bacterial pneumonia Pneumonia, a respiratory disease that kills about 50,000 people in the United States every year, can be caused by many different microbes, including bacteria and viruses. Rapid detection of pneumonia is critical for effective treatment, especially in hospital-acquired cases which are often more severe. However, current diagnostic approaches often take several days to return definitive results, making it harder for doctors to prescribe the right treatment. MIT researchers have now developed a nanoparticle-based technology that could be used to improve the speed of diagnosis.