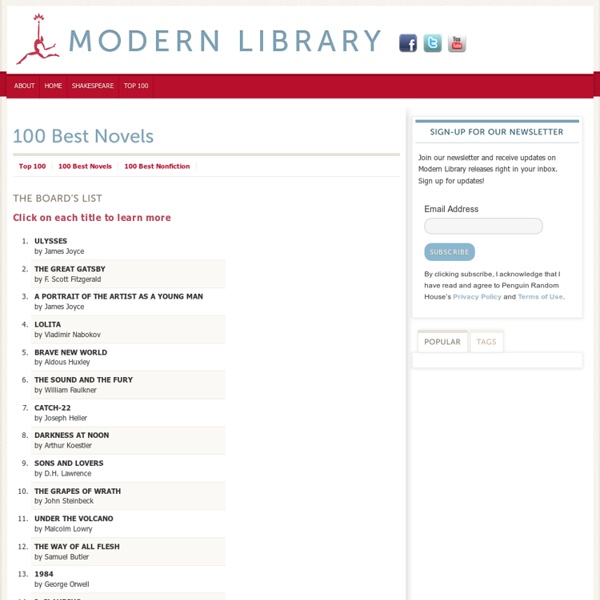 ULYSSES by James Joyce Written as an homage to Homer’s epic poem The Odyssey, Ulysses follows its hero, Leopold Bloom, through the streets of Dublin. Overflowing with puns, references to classical literature, and stream-of-consciousness writing, this is a complex, multilayered novel about one day in the life of an ordinary man. Initially banned in the United States but overturned by a legal challenge by Random House’s Bennett Cerf, Ulysses was called “a memorable catastrophe” (Virginia Woolf), “a book to which we are all indebted” (T. S. Eliot), and “the most faithful X-ray ever taken of the ordinary human consciousness” (Edmund Wilson). Click here to read more about ULYSSES THE GREAT GATSBY by F. Set in the Jazz Age, The Great Gatsby tells the story of the mysterious millionaire Jay Gatsby, his decadent parties, and his love for the alluring Daisy Buchanan. A PORTRAIT OF THE ARTIST AS A YOUNG MAN by James Joyce Click here to read more about A PORTRAIT OF THE ARTIST AS A YOUNG MAN U.S.A.

Booklists - Classic Novels The Adventures of Huckleberry Finn by Mark Twain Justice and honor are celebrated in this story about Huck’s adventures on the Mississippi River with the runaway slave Jim. All Quiet on the Western Front by Erich Maria Remarque Film review: Dunkirk catches the historical verity of the event There is a large problem with making a film in which one of the principal virtues is that you become lost in a chaotic world. After 100 minutes in which no rhyme nor reason applies, when the director cutely ties up all your loose ends in the final 10 minutes, the audience may walk away feeling shortchanged, as I did. From its opening scene that shadows an English squaddie scuttling through the streets of the town while an unseen enemy takes potshots at him, Dunkirk casts you into a world where all order has disappeared – for the Allied forces at least. It is not long before the audience is introduced to the film’s three key plot lines and locations: The Mole, The Sea and The Air.

12 Greatest Apocalyptic Novels Of All Time After scouring book reviews and Wikipedia, a list of the Top 12 Best Apocalyptic Novels was born. The books on this list take you down the darkest paths in uncivilized worlds, from cannibalistic gangs to vampire infected corpses. If this list doesn't get you thinking on the quickest way stock your basement full of water, canned goods and rifles, I don't know what will! Enjoy! World War Z Documenting the war on zombies, "World War Z" takes you through horific times with some of the most vivid writing this genre has ever seen.

52 Tips to Read Faster and Remember More College students have to take on lots of reading and memorization, and sometimes, it’s just too much to handle. So how do you manage to read everything you need to AND remember it all? Just try out these 52 tips and you’ll be in much better shape when test time rolls around. Read Faster Five-paragraph essay Despite the fact that, as Shakespeare said, "the pen is mightier than the sword," the pen itself is not enough to make an effective writer. In fact, though we may all like to think of ourselves as the next Shakespeare, inspiration alone is not the key to effective essay writing. You see, the conventions of English essays are more formulaic than you might think – and, in many ways, it can be as simple as counting to five. The Five Paragraph Essay Though more advanced academic papers are a category all their own, the basic high school or college essay has the following standardized, five paragraph structure:

10 Of The Best Free Audiobooks From BooksShouldBeFree That You Should Listen To Audiobooks are great for people who find themselves with moments where they’re awake, but have other things they need to do with their hands. Driving, cooking, nursing or knitting are all things people can normally do at the same time as listening to something. Listening to audiobooks is a great way to multitask during those times of day and add a little culture. Thanks to public domain archives like Project Gutenberg and LibriVox, there’s plenty of great audiobooks available free to download. BookBrowse.com: More than 20,000 book reviews, reader reviews, c {*style:<ul>*} {*style:<li>*} {*style:<br>*}{*style:<b>*}Harry's Trees{*style:</b>*}{*style:<br>*} by Jon Cohen{*style:<br>*}What a dazzlingly yet wonderful cast of characters we meet in Harry’s Trees by Jon Cohen. The one thing united them is grief and loss. A widow loses her husband to a ...