How Studying or Working Abroad Makes You Smarter 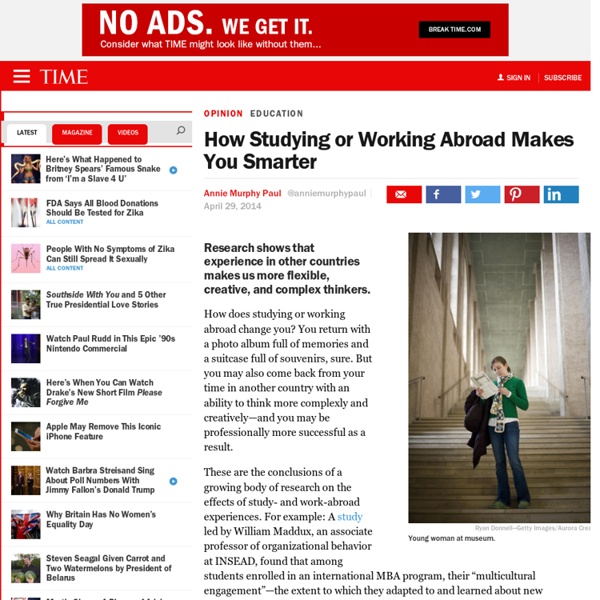 How does studying or working abroad change you? You return with a photo album full of memories and a suitcase full of souvenirs, sure. But you may also come back from your time in another country with an ability to think more complexly and creatively—and you may be professionally more successful as a result. These are the conclusions of a growing body of research on the effects of study- and work-abroad experiences. For example: A study led by William Maddux, an associate professor of organizational behavior at INSEAD, found that among students enrolled in an international MBA program, their “multicultural engagement”—the extent to which they adapted to and learned about new cultures—predicted how “integratively complex” their thinking became. That is, students who adopted an open and adaptive attitude toward foreign cultures became more able to make connections among disparate ideas. Brilliant readers, what do you think?

Portrait of an ESFJ As an ESFJ, your primary mode of living is focused externally, where you deal with things according to how you feel about them, or how they fit in with your personal value system. Your secondary mode is internal, where you take things in via your five senses in a literal, concrete fashion. ESFJs are people persons - they love people. They are warmly interested in others. They use their Sensing and Judging characteristics to gather specific, detailed information about others, and turn this information into supportive judgments. They want to like people, and have a special skill at bringing out the best in others.

About Us - CallerSmart We're a merry band of pirates Brian is the brains behind CallerSmart as well as the head of marketing. He loves green tea ice cream. Maciej leads our personnel group. He loves vanilla ice cream with a few slices of banana topped with a bit of chocolate & whipped cream (sweet tooth!). Creating names with emotional appeal I’m working with a client who wants to change his startup’s name, in part because the company’s focus has shifted. But he cited another, equally important reason for a name change: the current name isn’t inspiring. It lacks an emotional charge. My mission: to develop a set of names that meet this “more emotion” objective while also being appropriate, authentic, memorable, and legally available. Here’s how I’m approaching the challenge. Feel free to borrow these suggestions for your own naming project.

800 random questions Well this be my first post, and since its silly o'clock and I can't sleep I decided to compile a list of 101 random questions that I have or would ask people as I get to know them. To be honest 101 wasnt really enough but I finally got tired so i'll probably add to it later hehe 1) Whats your (full) name?2) How old are you?3) Whats your Birthday?4) What starsign does that make it? Suggestions for Managing Disruptive Students :Educational Strategies Regardless of whether you're a veteran teacher or just starting down your career path as an educator, it's critical that you constantly improve your classroom management techniques. As you'll come to realize quite quickly, a classroom is an extremely dynamic environment with constantly changing needs. With this in mind, you're bound to experience new challenges posed to your learning environment and teaching style by some of the students in your class.

Slash: Not Just a Punctuation Mark Anymore – Lingua Franca - Blogs - The Chronicle of Higher Education In the undergraduate history of English course I am teaching this term, I request/require that the students teach me two new slang words every day before I begin class. I learn some great words this way (e.g., hangry “cranky or angry due to feeling hungry”; adorkable “adorable in a dorky way”). More importantly, the activity reinforces for students a key message of the course: that the history of English is happening all around us (and that slang is humans’ linguistic creativity at work, not linguistic corruption). Two weeks ago, one student brought up the word slash as an example of new slang, and it quickly became clear to me that many students are using slash in ways unfamiliar to me. In the classes since then, I have come to the students with follow-up questions about the new use of slash. Finally, a student asked, “Why are you so interested in this?”

The Yiddish Handbook: 40 Words You Should Know Sheri Jo Fantastic post! I grew up in a town with many, many Jewish people and Yiddish sayings are 2nd nature to me. However, the town I have lived in for the past 15 years has a very small Jewish population in comparison. Consequently, whenever I use a Yiddish term, the response is either hysterical laughter or the “DAHHH… shmendrik” look. Thanks for a great post! How To Woo The Hearts Of Millennials Companies trying to win over millennials and create brand loyalty have a challenging task at hand. This generation, born between 1977 and 2000 have a uniquely different outlook from the generations before them and operate on an entire different set of values and priorities. As a brand, if you don’t know how to speak their language and touch their hearts they will disregard you, that is, if they even noticed you at all in the first place.

What is language extinction and why should we care? Almost half of the roughly 6,900 languages spoken around the world today are endangered. Scarily, the rate of extinction is accelerating and there is a whole lot at stake. By Heterography and homography In linguistics, heterography is a property of a written language, such that it lacks a 1-to-1 correspondence between the written symbols and the sounds of the spoken language.[1][dubious ] Its opposite is homography, which is the property of a language such that written symbols of its written form and the sounds of its spoken form have a 1-to-1 correspondence.[2][dubious ] The orthography of the English language is, according to Larry Trask, a "spectacular example" of heterography. But most European languages exhibit it to some extent. Finnish is "very close" to being a systematically homographic language.[1][2] A phonemic transcription (such as a transcription of phonemes that uses the International Phonetic Alphabet, for example) is, by its nature, homographic, also.[2]

What If Everything You Knew About Disciplining Kids Was Wrong? June Arbelo, a second-grade teacher at Central School, comforts a student who wants to go home during the first day of school. Tristan Spinski/GRAIN Leigh Robinson was out for a lunchtime walk one brisk day during the spring of 2013 when a call came from the principal at her school. Will, a third-grader with a history of acting up in class, was flipping out on the playground. English language weird rules: Tweet reveals our bizarre way of speaking This single tweet proves just how bizarre the English language is. I’M NOT racist, but English is a bloody ridiculous language. Just about anybody who has studied a second language can attest to that.

Heteronym (linguistics) Euler diagram showing the relationships between heteronyms and related linguistic concepts. A heteronym (also known as a heterophone) is a word that is written identically but has a different pronunciation and meaning. In other words, they are homographs that are not homophones.