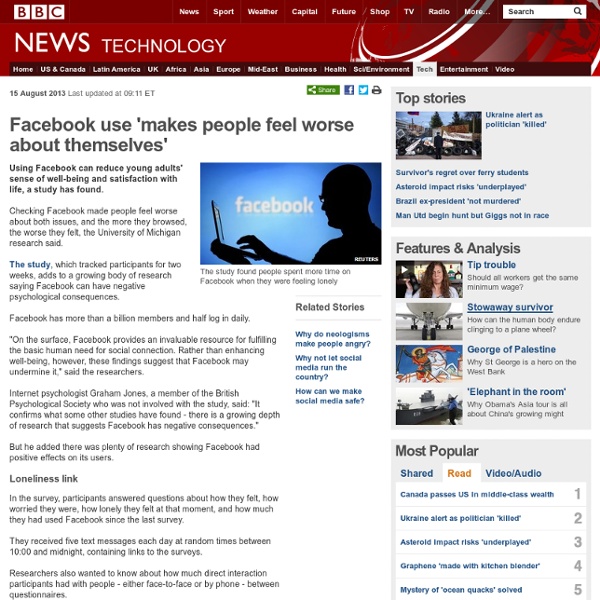 15 August 2013Last updated at 09:11 ET The study found people spent more time on Facebook when they were feeling lonely Using Facebook can reduce young adults' sense of well-being and satisfaction with life, a study has found. Checking Facebook made people feel worse about both issues, and the more they browsed, the worse they felt, the University of Michigan research said. The study, which tracked participants for two weeks, adds to a growing body of research saying Facebook can have negative psychological consequences. Facebook has more than a billion members and half log in daily. "On the surface, Facebook provides an invaluable resource for fulfilling the basic human need for social connection. Internet psychologist Graham Jones, a member of the British Psychological Society who was not involved with the study, said: "It confirms what some other studies have found - there is a growing depth of research that suggests Facebook has negative consequences." Loneliness link Learning the rules Related:  Social connection

F**cked by Facebook - why politicians must become digitally literate Where's the unlike button when you need it? Social networking and the phenomenal importance that Facebook is playing in the online ecosystem of small Malta is creating a good deal of havoc. It is now a veritable playground of wired bullies, trollers, geeks, and voyeurs where the conflagration of private viewpoints being foisted upon a willing public is leading to embarrassing situations for some. First it was the rotund One TV presenter Joe Grima, the former Labour minister who resigned his television spot after telling a Catholic priest to "fuck off" for penning an unflattering obituary of Dom Mintoff. When did posting on Facebook become such a dangerous game? So as politicians and public persons are recognising the importance of social media engagement, they find themselves having to make a qualitative difference between what they say - and if what they say represents their public persona, or their private views. Generational disconnect Digital literacy: seriously needed

Sexting scare: 6 sexting myths busted It seems incredible that teens, even 17-year-olds who can legally have sex, could end up on a register for sexting. Of course, it’s important that young people understand the serious implications sexting could have, but criminalising the craze seems like a step too far. Instead of frightening teens into ditching their naked selfies, wouldn't it be better to educate them? But with sex education lessons still in need of a 21st century revamp, it looks like that’s not going to happen anytime soon. Sarah Bazaraa, a solicitor at Pannone Corporate, talks me through the civil legal issues that being involved in sexting could lead to. 1) You could end up with a police caution Sending a naked image of yourself via text message, or social media, when you’re below the age of 18 is technically illegal. Detective Sergeant Jan Rusdale of the Nottinghamshire force warns: “[People who do it] could end up on the register for a couple of years. 2) It’s worse to send a photo of a sexual act

Rethink Facebook Marketing It is a common conversation topic in businesses and marketing departments across the world: Facebook. The social network has become the creme de creme of marketing plans, business seminars, college courses, and entrepreneurs. There are thousands (perhaps millions) of articles written about Facebook each week - some claiming it has changed the way they do business, others saying it has been a flop and a waste of money. Behind it all is one simple idea: marketing. Today, Facebook offers businesses several ways to market themselves. Integrated Marketing Communications The main part of the Facebook Problem is that brands have forgotten about integrated marketing communications. Facebook is a great marketing tool, but it still needs to be supported by other outlets. Even businesses who do integrate their marketing forget that marketing performance on one outlet can be impacted by another. Increasing Noise Facebook is full of content and becoming increasingly clouded with posts by brands.

Essena O'Neill quits Instagram claiming social media 'is not real life' | Media An Australian teenager with more than half a million followers on Instagram has quit the platform, describing it as “contrived perfection made to get attention”, and called for others to quit social media – perhaps with help from her new website. Essena O’Neill, 18, said she was able to make an income from marketing products to her 612,000 followers on Instagram – “$2000AUD a post EASY”. But her dramatic rejection of social media celebrity has won her praise. On 27 October she deleted more than 2,000 pictures “that served no real purpose other than self-promotion”, and dramatically edited the captions to the remaining 96 posts in a bid to to reveal the manipulation, mundanity, and even insecurity behind them. O’Neill did not respond to requests for an interview. A photo of her wearing a bikini, once captioned “Things are getting pretty wild at my house. “Why would you tell your followers that you’re paid a lot to promote what you promote? “Yet I, myself, was consumed by it.

Online echo chambers: A study of 250 million Facebook users reveals the Web isn’t as polarized as we thought Illustration by Alex Eben Meyer. Farhad Manjoo is a technology columnist for the Wall Street Journal and the author of True Enough. Follow This is of particular interest to me. In 2008, I wrote True Enough, a book that argued that digital technology is splitting society into discrete, ideologically like-minded tribes that read, watch, or listen only to news that confirms their own beliefs. I’m not the only one who’s worried about this. It turns out we’re not doomed. Bakshy’s study involves a simple experiment. By comparing the two groups, Bakshy could answer some important questions about how we navigate news online. That’s exactly what Bakshy found. But here’s Bakshy’s most crucial finding: Although we’re more likely to share information from our close friends, we still share stuff from our weak ties—and the links from those weak ties are the most novel links on the network. In this way, Bakshy’s findings complicate the echo chamber theory. Justin Sullivan/Getty Images.

More than a quarter of children who spend longer on social networking websites report mental ill-health symptoms Children who spent more than three hours using social networking websites on a school day were twice as likely to report high or very high scores for mental ill-health. The Children’s Well-being 2015 publication, which for the first time includes an analysis of data on children’s mental ill-health, revealed that of those who were online for more than three hours, 27% reported high or very high scores for mental ill-health. This is more than double those spending no time on them (12%) or those spending up to three hours on social media (11%). Total difficulty score type by time spent using social media on a school day, UK, 2011 to 2012 Download the data The Insights into Children’s Mental Health and Wellbeing report is part of of ONS’s work on the well-being of children. It looks at data from the Strengths and Difficulties questionnaire, designed by Prof Robert Goodman, which screens the behaviour of children aged two to 17. Download the data Children’s Mental Health:

Convincing a boss that Facebook marketing works Is your business on Facebook? Do you need to convince your boss—or a client—that Facebook is a worthy marketing investment? In this article I’ll show you 7 things you can do to convince decision-makers of the value Facebook. #1: Assess Your Goals Before you can convince anyone that they need to be on Facebook, you’ll need to understand what they want to accomplish. Remember that not every business needs to be on Facebook. If you are in a B2B that sells concrete to two or three huge companies, LinkedIn might be a better fit. Not all businesses need to be on Facebook. Ask the following questions before you start planning a campaign to help you assess expectations and set goals. What are your expectations? For starters, explain that ROI for social media can be measured by getting better customer feedback, increasing word-of-mouth marketing and gaining a better understanding of customers’ wants and needs. You need to understand social media ROI and know your company’s expectations. inShare982

Manchester police face legal bid over teen's naked photo details Image copyright Getty Images A police force is facing a legal challenge against its refusal to delete the details of a teenager who sent a naked photograph of himself on social media to a girl at his school. The 14-year-old boy was not arrested or prosecuted by Greater Manchester Police. But his mother said she was concerned police could release the information to potential employers when he is older. The High Court is due to consider the case this morning. The boy used a messaging site to send a photo of his naked body to the girl, who then shared it with others. Police took no action against him other than to record on their database that he had taken and forwarded an "indecent" image of himself, logged under a section entitled "Obscene Publications". Greater Manchester Police has refused to delete the boy's name from its files, a decision his mother is contesting at the court, which is sitting in Manchester.