Apostrophe now: Bad grammar and the people who hate it 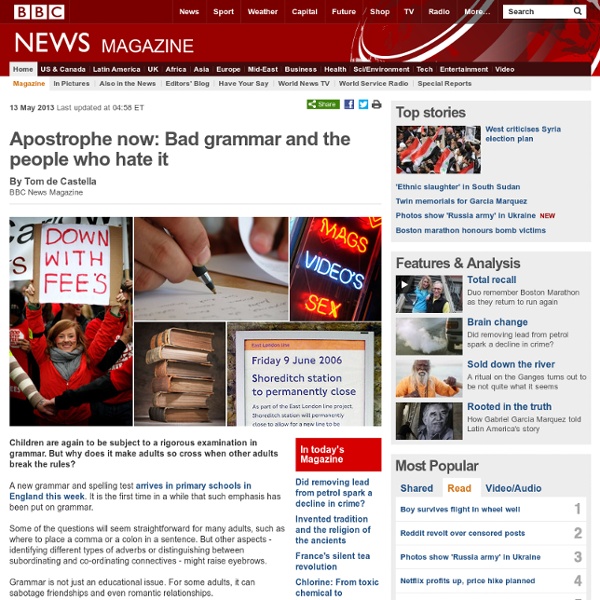 13 May 2013Last updated at 04:58 ET By Tom de Castella BBC News Magazine Children are again to be subject to a rigorous examination in grammar. But why does it make adults so cross when other adults break the rules? A new grammar and spelling test arrives in primary schools in England this week. Some of the questions will seem straightforward for many adults, such as where to place a comma or a colon in a sentence. Grammar is not just an educational issue. The research arm of dating site OKCupid looked at 500,000 first contacts and concluded that "netspeak, bad grammar and bad spelling are huge turn-offs". On the other hand, correct use of apostrophes was appealing. Twist Phelan, an American writer who went on 100 online dates in 100 days and later married someone she met online, says grammar is a vital "filter system". Continue reading the main story Try out the new grammar test A pair of commas can be used to separate words or groups of words and to clarify the meaning of a sentence. Related:  Spelling, punctuation and grammar

Steven Pinker: 10 'grammar rules' it's OK to break (sometimes) Among the many challenges of writing is dealing with rules of correct usage: whether to worry about split infinitives, fused participles, and the meanings of words such as "fortuitous", "decimate" and "comprise". Supposedly a writer has to choose between two radically different approaches to these rules. Prescriptivists prescribe how language ought to be used. They uphold standards of excellence and a respect for the best of our civilisation, and are a bulwark against relativism, vulgar populism and the dumbing down of literate culture. Descriptivists describe how language actually is used. It's a catchy dichotomy, but a false one. But this does not mean that every pet peeve, bit of grammatical folklore, or dimly remembered lesson from Miss Thistlebottom's classroom is worth keeping. How can you distinguish the legitimate concerns of a careful writer from the folklore and superstitions? A rule should be rejected, in contrast, if the answer to any of the following questions is "Yes."

Spelling it out: is it time English speakers loosened up? I can’t remember exactly how often spelling tests happened at school – maybe every week or two – but I do remember I looked forward to them. We’d be tested, I’d do well, then I’d feel good about myself. Children who weren’t good at spelling would feel bad about themselves. That’s just how it worked. In some ways prescriptivism about spelling is falling out of fashion. Today, even the biggest pedants (I’m looking at you, Stephen Fry) will concede that it is in rather poor taste to emphasise the form of something as fluid as language over its function. Last year, Oxford professor Simon Horobin published a book that called this attitude into question. English is an uncommonly tricky language to spell. English spelling is so difficult that we take some kind of perverse pleasure in encouraging people to compete in public to show how well they can do it. Spelling has taken on a kind of special status in English: good spelling equates to high intelligence. Read more stories:

They Say You Should Break This Grammar Rule Yesterday, I got into a bit of a discussion in the comments section over the use of the singular “they.” People go into a frenzy whenever you use it, and when you challenge the rule, they cling to it as if their very position in the American Society of Grammar Pedants depended upon it. Let me make my position clear: In situations with a generic singular antecedent, "they" is not OK. It is preferable. Consider the reasons that we are supposed to oppose singular “they”: Historically, this is how we have always done it, and people are now trying to change it because of some absurd PC supposition that this will fix sexism. However, if you continue to insist that, OK, it was a dumb rule when it was introduced, but this is how we do things now, let me point out some problems with this rule: It forces the writers of English into clumsy constructions. I’m not against grammar rules. To contact the writer of this article: Megan McArdle at mmcardle3@bloomberg.net.

Strictly English: Part one One should take care in using the verb contradict. For there to be a contradiction there has to be a statement, for a contradiction is a categorical statement in opposition to another. If one person says “the dog is black” when it is obvious that the beast is white, then to affirm its whiteness is a contradiction; and one may say: “I contradicted his assertion that the dog was black.” I am unclear whether this is now accepted American usage to describe something that is enormous. Educated writers will use the phrase “a fraction of the cost went towards overheads” without thinking of its logic. What such writers inevitably mean is a small fraction, which although still vague is a perfectly acceptable statement. Part of the problem with the interference of the state in our lives, and the apparent ubiquity of its bureaucrats, is that many of us find ourselves using – or misusing – the jargon of officials in our everyday language. We use the word inquiry when we mean question or query.

Modern tribes: the grammar pedant | Catherine Bennett Fewer. Not less, F-E-W-E-R. Because it matters – God, this is why they should bring back grammar lessons. I don’t care what Shakespeare wrote, his grammar was appalling. If not being irresponsible and misleading is pedantic, I’m proud to be one. There Is No ‘Proper English’ It’s a perpetual lament: The purity of the English language is under assault. These days we are told that our ever-texting teenagers can’t express themselves in grammatical sentences. The media delight in publicizing ostensibly incorrect usage. A few weeks ago, pundits and columnists lauded a Wikipedia editor in San Jose, Calif., who had rooted out and changed no fewer than 47,000 instances where contributors to the online encyclopedia had written “comprised of” rather than “composed of.” Does anyone doubt that our mother tongue is in deep decline? Well, for one, I do. As children, we all have the instinct to acquire a set of rules and to apply them. That’s how scholarly linguists work. The grammatical rules invoked by pedants aren’t real rules of grammar at all. Some other pedantic stipulations are destructive pieces of folklore, like the belief that it is wrong to split an infinitive or to end a sentence with a preposition. The critics had misjudged what a dictionary is for. — Mr.

Think Grammar Doesn't Matter? It Could Be Holding You Back From a Promotion | Grammarly Quality writing can help you get ahead in your career, but the opposite is also true. If you want to get ahead in the workplace, change careers, or find a job, then it's time to dust off that dictionary, thumb through your thesaurus, and get a grip on grammar. Grammarly reviewed 100 LinkedIn profiles of native English-speakers in the consumer packaged goods industry. We discovered a direct link between the number of grammar and spelling errors in a profile and the trajectory of that person's career. Professionals whose profiles contained fewer mistakes also achieved higher positions. Why does writing have such a huge impact on your career? It all comes down to the impression you make. It turns out that the way you do anything -- even writing an email -- is the way you do everything. How to Improve Your Grammar Sounds pretty grim, right? 1. Spell check has made many of us lazy spellers, but you shouldn't rely solely on the wavy red line to highlight your errors. 2. 3. 4. 5.

Steven Pinker: 'Many of the alleged rules of writing are actually superstitions' People often ask me why I followed my 2011 book on the history of violence, The Better Angels of Our Nature, with a writing style manual. I like to say that after having written 800 pages on torture, rape, world war, and genocide, it was time to take on some really controversial topics like fused participles, dangling modifiers, and the serial comma. It’s not much of an exaggeration. After two decades of writing popular books and articles about language, I’ve learned that people have strong opinions on the quality of writing today, with almost everyone finding it deplorable. I can get as grumpy as anyone about bad writing. Contrary to the ubiquitous moaning about the imminent demise of the language, this is not a new problem. Though bad writing has always been with us, the rules of correct usage are the smallest part of the problem. These principles are harder to convey than the customary lists of errors that get recycled from one traditional style guide to the next. Extract Buy the book

What grammar pedants and fashion victims have in common Language pedants who take pleasure in policing other people’s use of grammar often have an air of respectability about them, but it’s usually a sheen hiding something more pernicious. Rather than actual rules of language, pedantry deals in half-truths, conventions and arbitrary shibboleths which are too often used to embarrass or undermine. Remember this if you get pounced upon by a pedant on National Grammar Day. People often liken the idea of wearing smart clothes to a job interview with the idea of using a particular type of “smart” or formal language. If your shoes and handbag don’t match, both items will still be entirely practical. Split infinitives and matching socks There is nothing wrong with having a preferences in clothes or in language. The problem, for language at least, is that the advice is often unsolicited, mocking criticism that simply fuels the self-importance of one person at the expense of the other, completely ignoring the context in which the language is used.

Pedants have their uses, but why such fury over apostrophes? | Catherine Bennett | Opinion Whatever persuaded Bristol’s self-styled “grammar vigilante” to be interviewed by Radio 4, subsequent public acclaim has presumably justified the risk of prosecution for criminal damage. For anyone who missed the show, this anonymous individual has spent the past 13 years defacing shop signs under cover of darkness. His excuse is that he is improving them, by removing redundant apostrophes and supplying missing ones, using a two-pronged “apostrophiser” he designed for that purpose. True, he had his critics, even within the pedant community. For some, it spoiled the story that the Bristol man could not be called a grammar vigilante, being so egregiously in the wrong. Apostrophes are not grammar, but punctuation. For the most part, the response to this solecism was forgiving, since he was plainly addressing a creeping social evil which the Apostrophe Protection Society has been powerless, thus far, to stop.