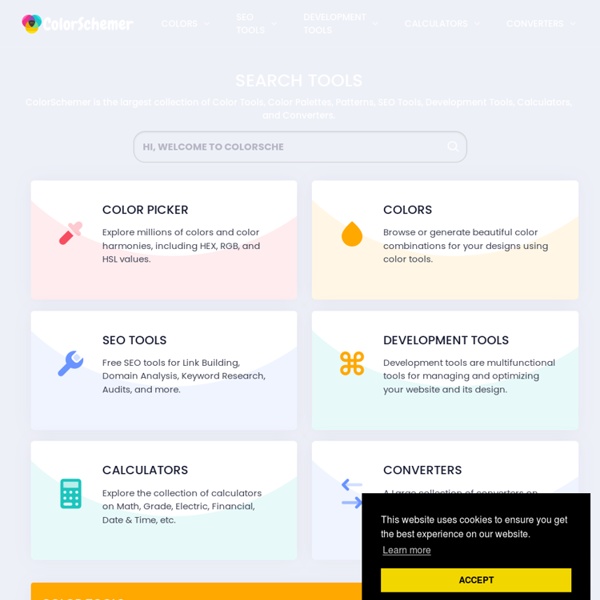 CSS Tools: Reset CSS The goal of a reset stylesheet is to reduce browser inconsistencies in things like default line heights, margins and font sizes of headings, and so on. The general reasoning behind this was discussed in a May 2007 post, if you're interested. Reset styles quite often appear in CSS frameworks, and the original "meyerweb reset" found its way into Blueprint, among others. The reset styles given here are intentionally very generic. There isn't any default color or background set for the body element, for example.

Broaden your Color Vocabulary With This Color Thesaurus Articles November 27, 2014 There is a plethora of colors in this world that is more complex and varied than a simple color spectrum that rainbow represents. So no wonder why most of us are having a hard time describing a particular shade of a color. Well maybe for other people, a red is a red regardless of its hue and intensity. But for artists, designers, writers, make-up artist and even for somebody who is planning to have their room painted with their specific favorite color, it is very significant to describe the exact shade of a color to get it right. Well Ingrid Sundberg – a writer and an illustrator – found a way to somehow ease the difficulty of describing colors using words. Browse Colors Log In Sign Up COLOURlovers Web-Based Color Tools One of the most important things designers work with is color. Every element they draw, type, or generate with a computer, gets a color. It is impossible to create anything visual without making color decisions. And to make things harder, estimates of the total number of discernable colors range from one hundred thousand to ten million. That’s a lot to choose from. Add issues of human perception and color vision deficiency, and you could get a headache doing anything with colors, let alone building a color scale for data.

Minify and Compress CSS Minifying CSS takes the beautified, well formed CSS code that you have written and removes the spacing, indentation, newlines, and comments. These elements are not required for CSS to be used successfully. It also makes the CSS more difficult to read. 100 Free PSD Files Every Web Designer Should Have In this post we gather a collection of 100 fully customizable web design elements layered PSD files, easy to use and customize with some adjustment as per your need and can be turned into ready web element. PSD files can be used to create good-looking and eye-catching web design layouts, icons, buttons, any web design elements and much more. There are lots of great designer out there who are regularly sharing some awesome PSDs and resources. So in today’s post we think why not to make a collection of some awesome PSDs files.

36 Eye-Catching Jquery Navigation Menus Navigation menus have really important role in any website. For big sites full with a lot of pages and articles, drop down menus and tabs are popular because they can make it a lot more easier to navigate and move through site, also you can save space on website displaying content on dynamic tabs. Also if you want to create a navigation menu, that really stands out of the crowd, jQuery could be the right choice to choose offering bunch of customizable options. That’s why I present to You 36 really good jquery navigation menu examples for every need. 1.jQuery Tabbed Interface / Tabbed Structure Menu Tutorial

CSS Tools: Reset CSS The goal of a reset stylesheet is to reduce browser inconsistencies in things like default line heights, margins and font sizes of headings, and so on. The general reasoning behind this was discussed in a May 2007 post, if you're interested. Reset styles quite often appear in CSS frameworks, and the original "meyerweb reset" found its way into Blueprint, among others. The reset styles given here are intentionally very generic. There isn't any default color or background set for the body element, for example. I don't particularly recommend that you just use this in its unaltered state in your own projects.

CSScomb: Sorting CSS Properties, The Better Way This is our seventh article in a series that introduces the latest useful and freely available tools and techniques, developed and released by active members of the Web design community. The first article covered PrefixFree1; the second introduced Foundation2, a responsive framework; the third presented Sisyphus.js3, a library for Gmail-like client-side drafts. The fourth shared a free plugin called GuideGuide4 with us, and later we’ve announced Erskine’s responsive grid generator Gridpak5 and JS Bin6. This time we present CSScomb, a tool to help you sort and categorize CSS properties in your code to improve maintenance. Autoprefixer: A Postprocessor for Dealing with Vendor Prefixes in the Best Possible Way By Andrey Sitnik On The following is a guest post by Andrey Sitnik, the creator of the Autoprefixer tool, a "postprocessor" for handling vendor prefixes in CSS. Why use this instead of your preprocessor or another tool? Many reasons. Andrey will explain.

SwatchBooker Features Reads color swatches from: Adobe aco, acb, act, ase, acf, bcf, clrAutoCAD acb (unencrypted only!)ColorSchemer csCorel cpl, xml (X5)GIMP gplICC named colors profilesOpenOffice.org socQuarkXPress qcl (+cui)RAL bcsRIFF palScribus xmlVivaDesigner xmlXara jcw The 10 Best CSS Editors of 2015 CSS editors are sometimes hard to come by. So we put together a list of some of our favorite editors for 2015. If you have any other programs you like better, lets us know!

Style Master CSS Editor for Windows and Mac OS X Cool Tools and Toys for Web Developers John, the lead developer (ok, pretty much the only developer) of Style Master is an avowed hacker. He loves exploring and experimenting with the latest features in browsers. Here's a collection of tools for web developers he's put together to help you analyse and debug your sites (and other people's sites as well), play with CSS3 features (bleeding edge browsers recommended) and more. CSS Formatter and Beautifier Enter your messy, minified, or obfuscated CSS Style Sheets into the field above to have it cleaned up and made pretty. The editor above also contains helpful line numbers and syntax highlighting. There are many option to tailor the beautifier to your personal formatting tastes. When do you use CSS Beautifier Often when writing CSS Style Sheets your indentation, spacing, and other formatting can become a bit disorganized. It is also common for multiple developers to work on a single project who have different formatting techniques.