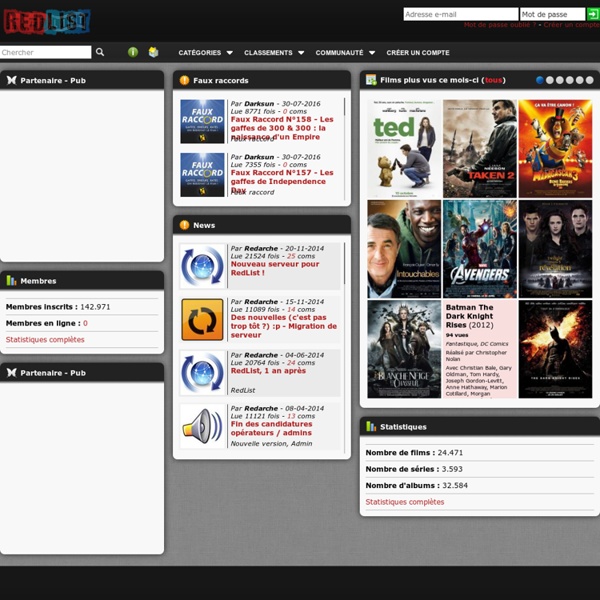 Entretien avec plomb «Wilfred», Jason Gann Jason Gann is an Australian actor, comedian, writer, producer best known for his role as Wilfred on both the Australian and American versions of the show. Not only does he act for the show, he also co-produces the show and has written many episodes. Check out the interview with Jason below and be sure to tune into “Wilfred” on FX every Thursday night at 10/9 ET. I know all dogs are colorblind, but I figure Wilfred is the anomaly to this case. If he were to have a favorite color, what do you think it would be? “Turd brown.”

UNESCO's bizarre World Anti-Piracy Observatory Claude sez, UNESCO announced the launch of its World Anti-Piracy Observatory in a YouTube video on April 21, 2010, but according to French Wikipedia - an entry coyly started as "193.242.192.9" - the idea hearkens back to 2005, and reeks of it. Particularly notable: WAPO's "collection of national copyright laws", where each country's page is linked to a "Disclaimer" in which UNESCO claims copyright on the content of the collection and restricts its use to educational, non commercial purposes - even though in most cases, they simply downloaded the copyright law from the official site, renamed the file and re-uploaded it on the UNESCO server. There are also some gems of inaccuracy in the countries' PDFs that are linked to in the sections of WAPO that are listed in the left column - but putting copyright laws that are either in the public domain or copyrighted to the country's parliament under UNESCO's own copyright is the next-to-worst one.

Les 10 films les plus confus de tous les temps Nobody loves summer blockbusters more than we do. (We’ve already seen ‘Star Trek Into Darkness‘ multiple times.) Occasionally though, we need a movie with substance rather than something filled with special effects and thunderous explosions. Intellectually speaking, it’s the difference between fresh popcorn and the stuff that comes out of a microwaveable bag, you know? But, sometimes dense, complicated movies leave us wondering,“What the heck did we just watch?”

SOPA, Internet regulation, and the economics of piracy Earlier this month, I detailed at some length why claims about the purported economic harms of piracy, offered by supporters of the Stop Online Piracy Act (SOPA) and PROTECT-IP Act (PIPA), ought to be treated with much more skepticism than they generally get from journalists and policymakers. My own view is that this ought to be rather secondary to the policy discussion: SOPA and PIPA would be ineffective mechanisms for addressing the problem, and a terrible idea for many other reasons, even if the numbers were exactly right. No matter how bad last season's crops were, witch burnings are a poor policy response. Fortunately, legislators finally seem to be cottoning on to this: SOPA now appears to be on ice for the time being, and PIPA's own sponsors are having second thoughts about mucking with the Internet's Domain Name System.

ACTA rapporteur denounces ACTA masquerade Source: ACTA : une mascarade à laquelle je ne participerai pas - Kader Arif Kader Arif, rapporteur for ACTA in the European Parliament quit his role as rapporteur saying: ”I want to denounce in the strongest possible manner the entire process that led to the signature of this agreement: no inclusion of civil society organisations, a lack of transparency from the start of the negotiations, repeated postponing of the signature of the text without an explanation being ever given, exclusion of the EU Parliament's demands that were expressed on several occasions in our assembly.”