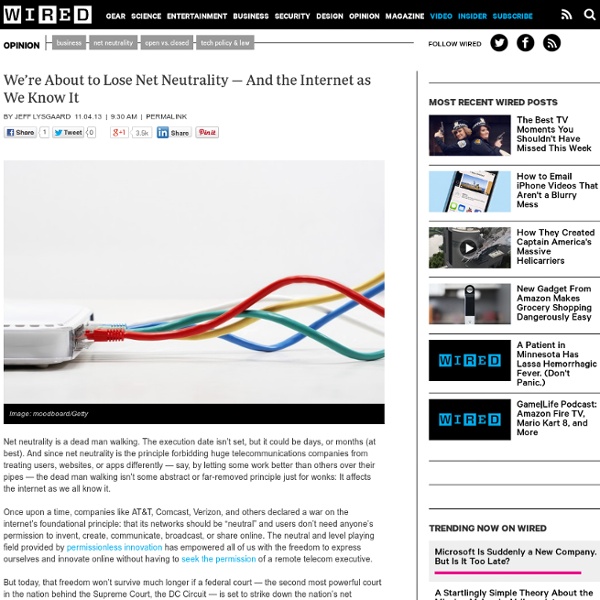 Image: moodboard/Getty Net neutrality is a dead man walking. The execution date isn’t set, but it could be days, or months (at best). And since net neutrality is the principle forbidding huge telecommunications companies from treating users, websites, or apps differently — say, by letting some work better than others over their pipes — the dead man walking isn’t some abstract or far-removed principle just for wonks: It affects the internet as we all know it. Once upon a time, companies like AT&T, Comcast, Verizon, and others declared a war on the internet’s foundational principle: that its networks should be “neutral” and users don’t need anyone’s permission to invent, create, communicate, broadcast, or share online. The neutral and level playing field provided by permissionless innovation has empowered all of us with the freedom to express ourselves and innovate online without having to seek the permission of a remote telecom executive. Game of Loopholes and Rules How did we get here?

The libraries that governments will burn in the future Well he better move the thing away from the coast or global warming will make his argument mute. I get where he's coming from,make it politically and socially costly to censor or control the contents.That might work if today's political climate and what is or is not socially acceptable and worthy of protection and preservation remain reasonably constant. But who can say what will be worthy,acceptable or even cared about a century from now.That said if you look at this as a concept where the contents vary with the times we should hope it holds true even a century or more from now.If it doesn't then that means the government,the country,and what is or is not acceptable or resistible will have changed dramatically and probably for the worse. When it not longer becomes politically and/or socially costly to censor or destroy cultural material it become dystopia,it becomes analgious to Nazi Germany,Communist USSR or even today's China or North Korea.

Will net neutrality ruling make Web like cable TV? Internet service providers are no longer required to treat all kinds of Web activity equally, a federal appeals court ruled Tuesday in a decision that could dramatically reshape online access. The decision overturns key parts of the Federal Communications Commission's net neutrality regulations, which barred Internet providers from restricting speeds or even blocking visits to different sites. Analysts say the ruling could allow Internet providers to slow down sites like bandwidth-heavy Netflix or Google and force them - or their visitors - to pay for faster access. Verizon, which brought the case to the U.S.

Physicists Discover Geometry Underlying Particle Physics Physicists have discovered a jewel-like geometric object that dramatically simplifies calculations of particle interactions and challenges the notion that space and time are fundamental components of reality. “This is completely new and very much simpler than anything that has been done before,” said Andrew Hodges, a mathematical physicist at Oxford University who has been following the work. The revelation that particle interactions, the most basic events in nature, may be consequences of geometry significantly advances a decades-long effort to reformulate quantum field theory, the body of laws describing elementary particles and their interactions.

The Ninth Circuit Library "Citations are the cornerstone upon which judicial opinions and law review articles stand....The ability to check citations and verify that citations to the original sources are accurate is integral to ensuring accurate characterizations of sources and determining where a researcher found information. However, accurate citations do not always mean that a future researcher will be able to find the exact same information as the original researcher. Citations to disappearing websites cause problems for legal researchers." Raizel Liebler & June Liebert, Something Rotten in the State of Legal Citation: The Life Span of a United States Supreme Court Citation Containing an Internet Link (1996-2010), 15 YALE J.L. & TECH. 273, 275 (2013), available at The following table lists Ninth Circuit opinions issued from 2008 to the present that cite to Internet addresses (URLs). In the default table view, opinions are arranged by year (current year first) and then alphabetically by case name.

Democrats Introduce Open Internet Preservation Act To Restore Net Neutrality Democrats in the House and Senate today introduced the Open Internet Preservation Act, a bill that would reinstate now-defunct net neutrality rules that were shot down last month. Net neutrality, in its most basic form, is the idea that ISPs must treat all Internet data the same. Under its regime, ISPs are not allowed to selectively speed up or slow down information requested by their customers due to their selective gatekeeping of the services impacted. Or, more simply, Comcast can’t decide that a site you want to load, or a video you want to watch, should be slowed, and content that it prefers, accelerated. With last month’s striking of the FCC’s net neutrality ruling, the D.C. Circuit Court of Appeals has changed the landscape of the Internet.

At Walgreen, Renouncing Corporate Citizenship Photo A little less than two years ago, Gregory D. Wasson, the chief executive of Walgreen, sought a series of tax breaks from Illinois, where his company is based. “We are proud of our Illinois heritage,” he said at the time. “Just as our stores and pharmacies are health and daily living anchors for the communities we serve, we as a company are now recommitted to serving as an economic anchor for northeastern Illinois.”

Vaizey's net neutrality knock-out The FT World Telecoms Conference is an annual gathering of top management from telecoms carriers throughout the world. It isn’t a high profile event for the general public, yet this is the platform where minister Ed Vaizey announced the future of the internet in the UK. Mr Vaizey praised the UK’s grossly inadequate current investment in internet infrastructure - however, the key point in his speech was about the abandonment of net neutrality in the UK. What does net neutrality actually mean? Net neutrality can be hard to define because of technical issues involved. But according to one of the world’s experts on it, Professor Tim Wu of Columbia Law School in New York, it is a principle that advocates no restrictions by internet service providers, infrastructure providers or the government on content, sites or different ways of using the ’net.

How The Human Brain Creates Consciousness Scientific talks can get a little dry, so I try to mix it up. I take out my giant hairy orangutan puppet, do some ventriloquism and quickly become entangled in an argument. I’ll be explaining my theory about how the brain — a biological machine — generates consciousness. Kevin, the orangutan, starts heckling me. ‘Yeah, well, I don’t have a brain. Google wins book-scanning case: judge finds “fair use,” cites many benefits Google has won a resounding victory in its eight-year copyright battle with the Authors Guild over the search giant’s controversial decision to scan more than 20 million books from libraries and make them available on the internet. In a ruling (embedded below) issued Thursday morning in New York, US Circuit Judge Denny Chin said the book scanning amounted to fair use because it was “highly transformative” and because it didn’t harm the market for the original work. “Google Books provides significant public benefits,” Chin wrote, describing it as “an essential research tool” and noting that the scanning service has expanded literary access for the blind and helped preserve the text of old books from physical decay.

Why Comcast Will Be Allowed to Buy Time Warner Cable and Kill Net Neutrality For the past three years, Comcast's Senior VP of Governmental Affairs has been Meredith Baker. Baker's last job was the Commissioner of the Federal Communications Commission, where she signed off on the controversial NBCUniversal sale to Comcast in 2009. Now we know that Baker, the former FCC Commissioner and a public official, was around to help make sure net neutrality died so Internet costs could soar, and that Time Warner Cable would be allowed to fold into Comcast, despite claims that the new megacorp might violate antitrust laws. Neither the new net neutrality rules nor a Time Warner Cable sale to Comcast could possibly benefit an average consumer or a small business. Both are likely to pass anyway. Today, the FCC announced it will allow for a euphemistic "Fast Lane on the web," demolishing Net Neutrality, and allowing content providers to charge both consumers and companies more if they don't want speed to their website or service artificially throttled.

Thank You for Your Service: How One Company Sues Soldiers Worldwide This article was co-published with The Washington Post. Army Spc. Angel Aguirre needed a washer and dryer. Money was tight, and neither Aguirre, 21, nor his wife had much credit history as they settled into life at Fort Carson in Colorado in 2010. That's when he saw an ad for USA Discounters, guaranteeing loan approval for service members. In military newspapers and magazines, on the radio, and on TV, the Virginia-based company's ads shout, "NO CREDIT? SXSW 2011: Al Franken warns of 'outright disaster' over net neutrality Democratic senator Al Franken has has issued a rallying cry to "innovators and entrepreneurs" at SXSW to fight back against Comcast and other companies lobbying to pave the way for a two-speed internet. The principle of net neutrality, under which all content is delivered equally to internet users' homes, is "in big trouble", Franken warned in a passionate rallying cry at the conference on Monday. Franken's address was always going to be a preach to the converted – SXSW is the spiritual home for small, independent media and technology firms – but he warned that unless the 200,000 attendees "use the internet to save the internet", then big telecoms firms will muscle through plans for a two-tier net.