The complete guide to Transmedia Storytelling 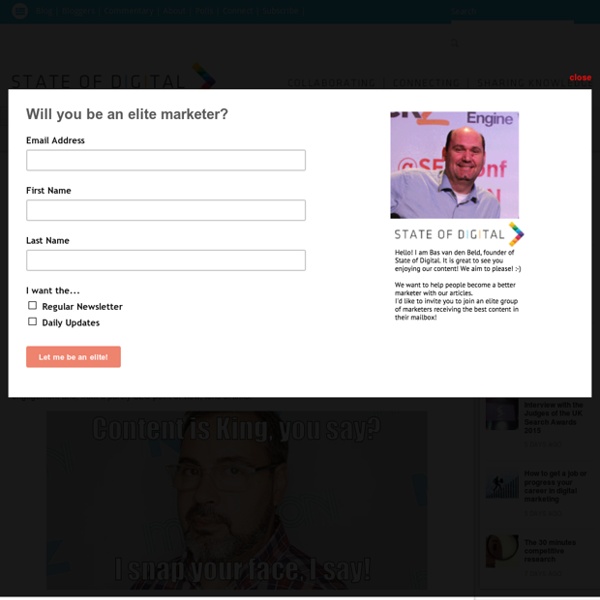 Estimated reading time: 11 minutes, 8 seconds Every day in our Feedly or Twitter or Facebook or G+ appears a post about how to create relevant content for our website, content that will help us to put our Brand in front of our audience, capturing its attention and generating social engagement and, from a purely SEO point of view, tons of links. What we often see are many individual actions, one for each medium used, which are almost always disconnected between them. Never, or very few times, the posts of the self-defined Content Marketing gurus in our industry, explain how those individual and often disjointed actions in fact form part of a much more complex strategy, how they are just a single molecule of a largest narrative body. And, let me tell you, that’s quite sad, because it is limiting. But there is a problem, especially true in all the B2C highly competitive industry niches (entertainment, fashion, travel…). Content must be magnificent. Storytelling matters because great stories are:

Every Platform Tells a Story: Transmedia has the power to make any topic more vivid and personal By Peter Gutierrez When Andy Plemmons, a progressive media specialist at David C. Barrow Elementary in Athens, GA, was asked to help create a set of interdisciplinary lessons for fifth graders to learn about September 11, 2001, he naturally took a transmedia approach. Plemmons remembers turning to TV, radio, and the Web to try to find out what was going on that day.

Audience Engagement in Transmedia Storytelling - Literature Review A Literature Review Introduction With the prevalence of media convergence, the manner in which narratives are constructed and the way audiences interact with them has evolved. One relatively new narrative format is “transmedia” storytelling, a term which first emerged in the 1990s, and was widely used in discussions about The Blair Witch Project (1999). The development of the concept is closely linked to the development of the Internet because of the way the Internet facilitates media convergence.

The Transmedia Hierarchy of Needs Have about 22 draft posts sitting in my WordPress Post box, so a bit of catch-up in next week or two to clear some out! Outside of the talk of what ‘transmedia’ actually is, the next key topic of controversy is how can you make money from it vs spending marketing money ‘on it’ to promote a traditional product/project. The Holy Grail at the moment is can we make the ‘multi platform, transmedia form’ an entertainment or service necessity – something worth users putting hands in pockets for (or clicking that PayPal button) and something worth spending the time and effort immersing yourself in – when there are so many other ‘linear’ fragments to graze on? This post therefore looks briefly at a core aspect of transmedia or experience design that is oft left out of the equation, the user need and how we can map out and create transmedia to meet those needs. Simple concept time.

Transmedia – Taxonomy « the dr will c u now …. This is an excerpt from a paper I did way back when in 2009 part of which needed to address the structure of a transmedia narrative, to clarify some of the terminology first though: Text: – will be used to reference a particular narrative story regardless of what medium in which the story is actually told. This can refer to the transmedia story as a whole (the significance of which we shall examine later in this paper), or for an individual story within the whole. Sub-text: – we shall use this term to define any component text that comprises part of a transmedia story. Adaptation: Where a sub-text has been directly adapted from the original medium, for example (love it or hate it, its marmite entertainment) Dan Brown’s 2004 novel The Da Vinci Code and its film equivalent in 2006 directed by Ron Howard.

Transmedia Storytelling “Transmedia storytelling” is telling a story across multiple media and preferably, although it doesn’t always happen, with a degree of audience participation, interaction or collaboration. In transmedia storytelling, engagement with each successive media heightens the audience’ understanding, enjoyment and affection for the story. To do this successfully, the embodiment of the story in each media needs to be satisfying in its own right while enjoyment from all the media should be greater than the sum of the parts. Before expanding on how to create transmedia experiences, let’s ask ourselves two questions: Dummies Guide to Writing a Transmedia Production Bible OK not really a Dummies guide as there are some complex elements in here, but one has to use whatever memes are in vogue A few weeks ago I was commissioned by Screen Australia to write a very basic structure & guide for producers relatively new to multi platform content to structure & document their propositions, after they have developed the ‘audience centric’ concepts. This has just been published on the Screen Australia site as a digital resource for those needing to document projects for transmedia productions. Background? I had already been using a range of structures in my 17 years as cross media producer (BBC, MUVEDesign, GaryHayes.TV etc:) and lecturer (recently Multi Platform course lead at LAMP, Australian Film TV and Radio School, Metro Screen & many international workshops). The writing guide is free to download from the Screen Australia site, link below the introduction.

Creating boundless experiences with Continuous Client and Transmedia Apr6 Apps create boundaries and isolated user experiences. It’s been awhile since I blogged about Continuous Client with my last experiment. I’ve had a lot of thoughts since then about application boundaries and how this impacts users. Computing is very app centric especially today with the emergence of App Store’s on mobile devices and desktop computers. Engaging with Transmedia Branding: An Interview with USC’s Burghardt Tenderich Early on, Grant McCracken used the example of Mr. Clean to illustrate what might happen as existing brand icons are given greater backstory. But, even in the entertainment industry, there’s been some debate lately about whether Hollywood is providing too much backstory now and whether backstory can bring negative consequences in terms of narrowing rather than intensifying audience engagement. What insights might you share about how much backstory might be needed to build audience interest in a brand narrative and when the backstory is doing damage to the core goal of the advertisement, which is to sell product? I’m all for open-ended stories and for improvisation.