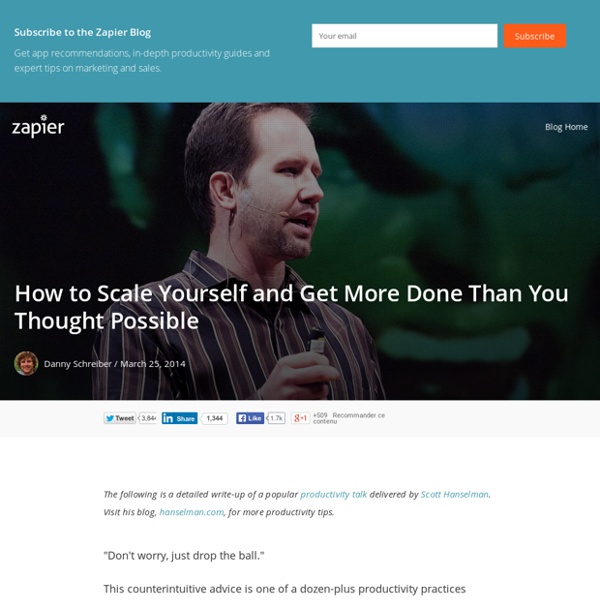 The following is a detailed write-up of a popular productivity talk delivered by Scott Hanselman. Visit his blog, hanselman.com, for more productivity tips. "Don't worry, just drop the ball." This counterintuitive advice is one of a dozen-plus productivity practices preached by Scott Hanselman, a program manager at Microsoft, author and avid blogger and speaker. "Dropping the ball is sometimes the right answer," Hanselman says. "Let a ball drop. Hanselman's not the person you'd to expect to hear encourage dropping the ball and discourage burning the midnight oil. How does he do it? "A lot of people say, 'Well, Scott, you're doing all this stuff. "It turns out," he continues, "the less that you do, the more of it that you can do. Scale Yourself In a 40-minute talk Hanselman originally delivered in 2012, and has since presented several times—most recently at South by Southwest Interactive earlier this month—he shares his productivity practices. Look for Danger Signs Define "Work" Drop the Ball

Every Country's Highest-Valued Export Editor's note: This story was originally published in May 2014. Using data from the CIA World Factbook, we labeled every country in the world by its highest valued export, aka the commodity that makes the country the most money in the global market. Unsurprisingly, much of the world runs on oil, particularly the Middle East and Central Asia. Europe is the world's workshop, where most of the machinery and motor vehicles are made, from optical instruments to BMWs.

5 Unusual Ways to Start Working Smarter, Not Harder, Backed by Science One of the things I love about the culture at Buffer is the emphasis on working smarter, not harder. Our team is all about getting plenty of sleep, exercise and recreation time so that our time spent working is as productive as it can be. Working harder can be an easy habit to slip into, though. 70% of Time Could Be Used Better - How the Best CEOs Get the Most Out of Every Day The average tech CEO works about 300 days a year, 14 hours a day. That’s 4,200 hours a year. The stats for most other tech leaders and startup employees aren’t too far off. It sounds like a lot of time, but for most, it’s not enough. Top 9 Bookmarking Tools for Designers We all find cool stuff online that we want to save for later – but we never remember it and most bookmarking systems on browsers become messy and cluttered very quickly. This is where bookmarking tools shine; they allow you to keep track of anything you find online, organize it and store it for you, being ready to access anytime and from any device with internet access. With the mountains of information and content online, it has become a lot more difficult to pick through and find what you’re interested in. Search engines only go so far; they are confined to keywords which are good for specific searches, but not so good when finding varied topics under an interest or niche. Some bookmarking sites not only allow you to keep track of any interesting things you find online, but they also to share your interests with others and see what they have bookmarked as well. Dragdis.com

The Morning Routine Experts Recommend for Peak Productivity What’s the best way to start your day so that you really get things done? Laura Vanderkam studied the schedules of high-achievers. What did she find? Almost all have a morning routine. How to destroy Programmer Productivity The following image about programmer productivity is making its rounds on the internet: As Homer Simpson might say, it’s funny because it’s true. I haven’t figured out the secret to being productive yet, largely because I have never been consistently productive. Ever. Joel Spolsky talks about this in one of his blog posts:

Nvidia inside: Hands on with Audi, Lamborghini, and Tesla SANTA CLARA, CA—Outside of the visitor check-in on Nvidia's campus, three gorgeous cars—the Audi RS7, the Lamborghini Aventador, and the Tesla Model S—are parked, attracting the occasional gawking employee. Although Nvidia's partnership with the three car makers isn't anything new, we welcomed the chance to see just what the tech in these high-end cars is really like. We also wanted to see what Nvidia hopes to offer car makers who are designing systems that will need to be cutting edge when their vehicles hit the market—a difficult task given the length of the automotive development cycle. The car maker's challenge to stay ahead in tech is a topic that Ars is going to be revisiting over the next several months, so what better way to get our feet wet than to talk with the chip maker that has become synonymous with high-performance GPUs?

How Keeping Things Simple Makes You A Productive Entrepreneur Running your own business is a complicated affair; making it successful can be even more complicated. If you don’t have a plan to be productive and keep focused, the details that you are responsible for can quickly overwhelm you. In fact, one of the biggest failings of new entrepreneurs is to get so caught up in an avalanche of unimportant details that more important priorities get left unattended on the table. What can you do to be a productive entrepreneur, focused on what really matters? Start by making your life itself simpler – become a minimalist.

The Origin of the 8-Hour Work Day and Why We Should Rethink It One of the most unchanged elements of our life today is our optimal work time or how long we should work – generally, every person I’ve spoken to quotes me something close to 8 hours a day. And data seems to confirm that: The average American works 8.8 hours every day. At least, those are the official statistics from the Bureau of Labor Statistics: And yet, for most of us it is obvious that knowing how long the average person works every day has little to do with how efficient or productive that pattern is.

8 Ways To Unlock Your Inner Creativity The Olympics are more than just the world’s premiere sporting event—they’re big, big media business. Just a few years ago, the closing ceremonies at the London 2012 Olympics attracted a staggering 900 million viewers, with more than 219.4 million Americans tuning into the games at one point or another. But what if you want to watch the Olympics without paying for cable television? There are options.

Related:
Related:  Interesante   -  Productivity Inbox   -  Time management   -  I ♡ Inbox Zero (Effective Time Management)   -  Inbox   -  RI Inbox   -  WIRED UK - Future Science, Culture & Technology News and Reviews   -  Jerry Seinfeld's Productivity Secret   -  Art   -  Oh, don't forget ➟ Schedule text message (SMS) reminders   -  Know the Trade – Your IT Security Information Portal | CISSP/CEH/CISA/Hacker and Penetration Testing Specialist   -  Little Big Details - The details are not the details   -  Build Your Own Productivity Style by Remixing the Best   -  Recalibrate Your Reality   -  Upworthy: Because we’re all part of the same story.   -  Crack/Keygen Sites That Are Safe To Use - FileShareFreak   -  5 Ways to Instantly Become More Productive | Nerd Fitness   -  Mobile Patterns   -  Sidebar   -  Upper-intermediate English, Cambridge Dictionary upper intermediate B2 English words and phrases   -  10 Laws of Productivity   -  Timeline of NSA Domestic Spying 1791-2015   -  Screen Sizes | Viewport Sizes and Pixel Densities for Popular Devices   -  Online Classes by Skillshare | Start for Free Today   -  Use Your Interface   -  Have I Been Pwned: Check if your email has been compromised in a data breach   -  Wait But Why   -  How Keeping Things Simple Makes You A Productive Entrepreneur   -  Life is a game. This is your strategy guide   -  Browser not supported   -  Screen Sharing, Online Meetings & Web Conferencing | Try join.me Free   -  Yahoo Design Pattern Library   -  5 Unusual Ways to Start Working Smarter, Not Harder, Backed by Science   -  How to Hone Your Creative Routine and Master the Pace of Productivity | Brain Pickings   -  How to Design The Perfect Daily Routine: The Ultimate System   -  Marketing video editor and animation maker   -  How to Spend the First 10 Minutes of Your Day   -  Equation Group: Meet the NSA 'gods of cyber espionage'   -  Productivity 101: How to Use Personal Kanban to Visualize Your Work   -  The Morning Routine Experts Recommend For Peak Productivity - Barking Up The Wrong Tree   -  ZURB